The next dozen dive sites, among the most interesting places that should be included in your list of dives for each diver – regardless of the choice of a specific direction. This is a unique place, which in my life is certainly worth a visit to anyone seriously passionate about diving and wants to learn all its facets.

Tiputa Pass has the reputation of one of the best places in the world for drift diving, and you will be able to assess the validity of this statement when I visited here. To get started is to visit the Shark Cavern, where, it is likely you happen to encounter grey reef sharks. Try to go with the flow, and on your way you will meet many other sea inhabitants, including stingrays, manta rays, dolphins, Tunas and hammerhead. 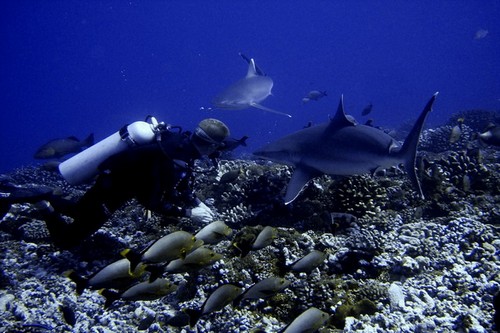 Immersion should be performed with the counter current, that you are not carried away in the opposite direction. But in some cases (for example, when you visit the caves) should start from their own experience.

The best time for diving in Tiputa Pass – June-July. In this period the most chances to meet sharks. The water temperature is about 25-26°C, so dive enough and thin wet suit 3 mm thick.

The rift Silfra on the border parts of the world – another most attractive for scuba divers from all over the world the unique place for diving, because where else, if not here, you can swim between two continents. Geographically, the immersion is carried out in Iceland, but the voyage is being made on the rift between the continental plates of North America and Eurasia, so the divers here have the opportunity to come into contact simultaneously with the two continents. 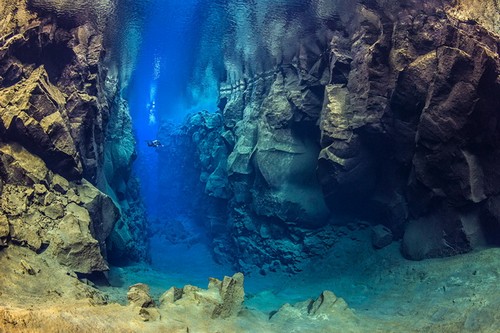 Diving in the gorge Silfra will give some of the most striking impressions from scuba diving, because the underwater visibility here is more than 100 m, which is associated with crystal clear glacial water, which for hundreds of years naturally othertables by passing through porous underground lava. Fish are almost never found, but beautiful rocky landscapes Silfra so impressive that it’s worth the dive, despite the low temperature of the water. 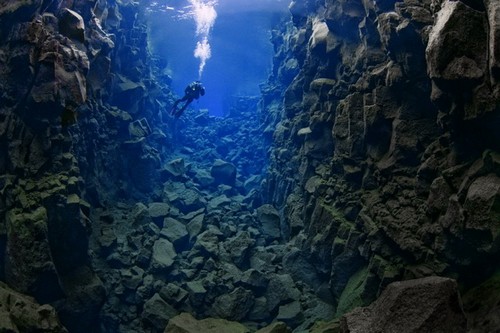 Diving in the rift Silfra available year-round, but in summer there may be more just want to dive into the waters of the unique place between two continents. The water temperature usually does not exceed 2-4°C, so diving requires a good wetsuit.

Diving in Fiji in General is very popular, but the best known and most unique dive site that attracts divers from around the world, is the Great White wall, located in the Strait Somosomo. 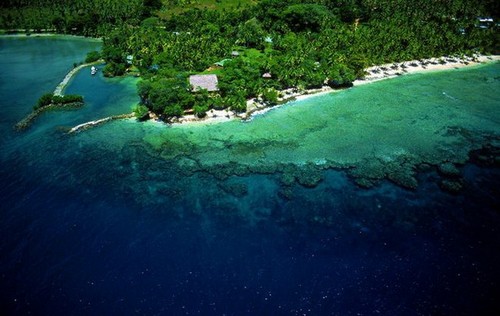 This unique location makes the abundance of brittle white coral, which give the illusion of snow-covered ski slope under water. The dive starts at a depth of 25 m, but it is necessary to bear in mind the presence of strong underwater currents, so diving here is suitable for the most experienced divers. 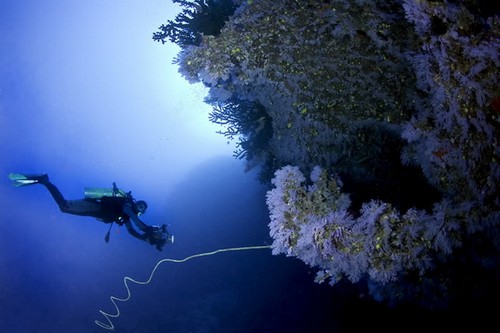 The best period to go to these places with the purpose to engage in such exciting diving among the coral forests of Taveuni, from November to April. The tropical waters of Fiji pleasantly pleasing temperature +24+30°C, so a 3mm wetsuit is the best solution for diving in Taveuni.

The Island Of Guadalupe, Mexico

This is one of the best places in the world for an unforgettable shark diving. Near the island of Guadalupe, you’ll encounter great white sharks, reaching a length of up to 5-6 m. diving in crystal clear waters with a lot of these huge predators, no doubt, add adrenaline in blood and to flutter your pulse. 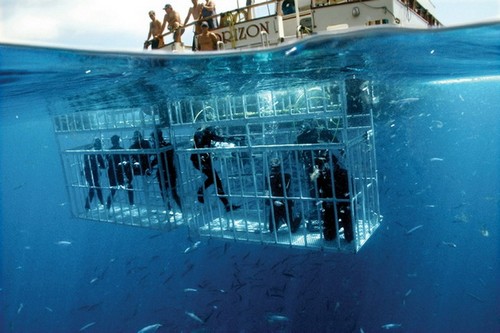 To get to the island of Guadalupe from harbors in the San Diego and San Francisco. If you wish to learn on their own experience, what is scuba diving with sharks, you – is here. Best period for diving with great white sharks in Mexico – from September to December, but most tourists here is in October-November. 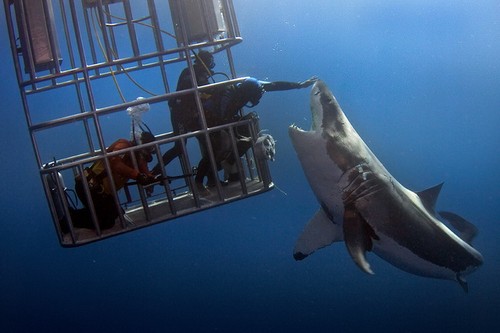 The temperature of the water during the season on average is not less than +18 to+21°C. So semi-dry wetsuit 6-7 mm is quite suitable option. But the most convenient would be a dry suit.

In the harbour of Saint-Diocese in Grenada is one of the most interesting for fans of wreck diving sites – a sunken luxury liner Bianca C, known to many as the “Titanic of the Caribbean”. This is one of the most noteworthy wrecks. 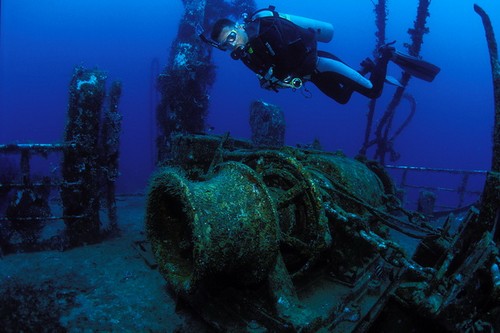 In October 1961, anchored near the coast of Grenada, the liner caught fire in the explosion in the engine room. All attempts to tow the cruise ship to shallow waters failed, and the ship sank just a few hundred meters from the coast. Therefore, the Bianca C is one of the most accessible for divers of wreck sites in the world and is simply impressive in its scope and interesting wreck. 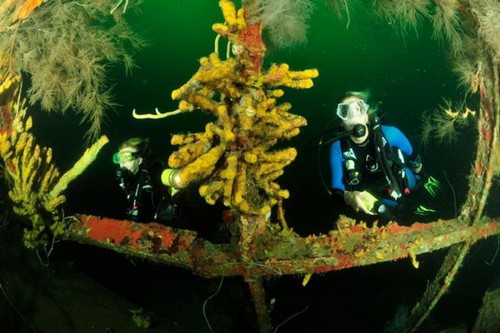 Many of the decks collapsed under the pressure of time, but Bianca C is still worthy of the attention of the sunken vessel. For underwater research available promenade deck with bridge and pool. It is these places turned into a real underwater colony for flocks of Barracuda. 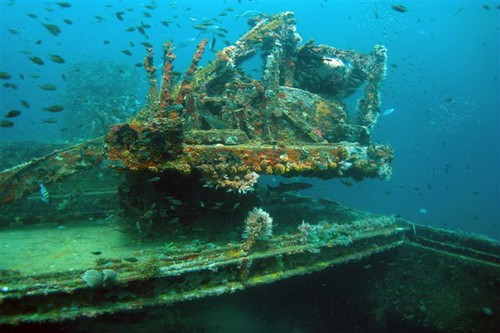 Next to this wreck site in the Gulf of Molinere, is another no less attractive for scuba divers place underwater Park of 65 sculptures, covering an area of 800 sq. m. When doing snorking in these places, can’t shake the feeling of being in a surreal world. Hundreds of corals and different marine flora entangled these statues that have made this underwater Park is unique in the marine realm. 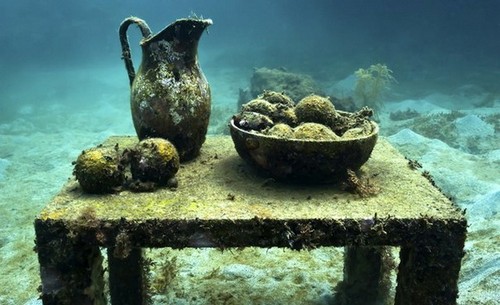 The best time for diving in Grenada – the dry season lasting from January to may. The water temperature here is rarely less than +26+28°C, so a wetsuit with a thickness of 3 mm is sufficient for the dive.

Of Stingray city in the Caribbean is a unique place for scuba diving. The depth of the dive there is only 4 m, but interesting is the place with many rays, with whom you can easily swim next door. There are over 30 species of stingrays that are so used to tourists that scurry around the divers like a friendly puppy. 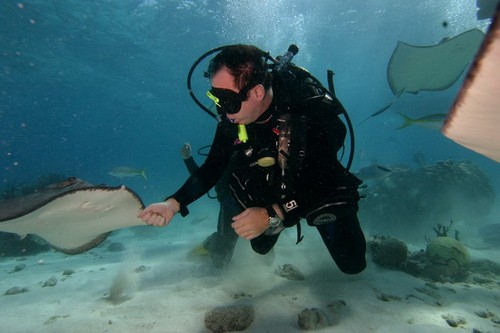 Grab a handful of squid and you won’t even notice that the first slope will rush to meet you, nose in hand with production, and will calmly eat with your hands. Diving with manta rays would be completely boring when production will compete with several rays. 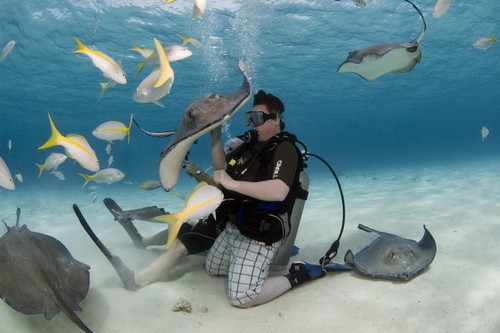 Any time of the year can be suitable for diving and swimming with the stingrays near the Cayman Islands. The water temperature is constant throughout the year and is on the order of +26 and+28°C, so 3mm wetsuit will be enough.

The Mexican island of Los’s consists of two rocky islets, one of which has the shape of a natural arch. Coastal waters and the coast of these Islands became a haven for a colony of California sea lions, of which there are more than two hundred individuals. These marine species can reach a length of three meters and weigh more 300 pounds. 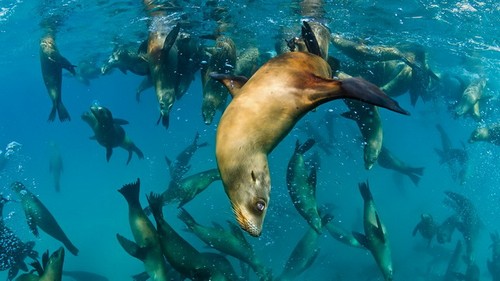 They are particularly playful, so I like to keep the company of divers floating in the neighborhood. And if large adults try to stay away from people, curious kids accompany divers everywhere. One baby sea lion even gained a special prominence because it has learned to jump in the boat to the divers and begged for food. 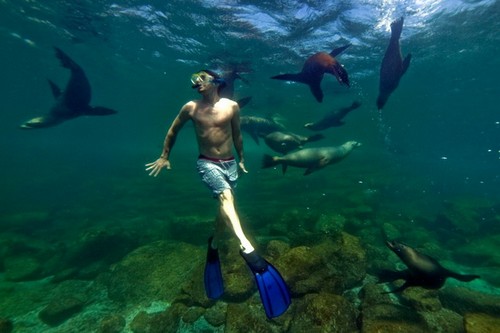 Most suitable for diving here is between August to November when the water is particularly warm and clear. Wetsuit 3 mm will provide sufficient protection when diving in these places.

In the list of lovers of wreck diving, located in the waters of the Pacific ocean, Truk lagoon is perhaps the first place, because so many sunken equipment (and ships and aircraft) never to meet. Numerous Japanese ships, destroyed by American aircraft, resting on the bottom of the ocean in this region. 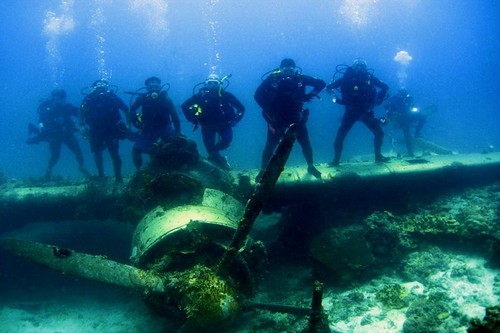 Among the most interesting underwater sites of Truk lagoon, it is worth noting the 132-meter ship Fujikawa Mara. The ship in a vertical position at a depth of 34 metres below the surface. It is invaded by soft corals and is the home of many reef fish. Here you can find shells, machine guns, wings and fuselage of the aircraft. 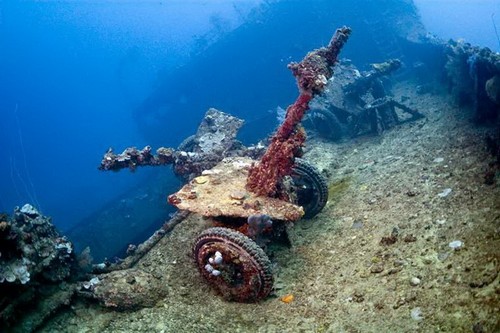 Combined with the stunning visibility, warm water and a lot of unique representatives of marine life this dive site is just a dream of any diver, not just lovers of wreck diving. The most favorable conditions for diving here in the period from June to September. The water temperature is constant and is about +27°C, so diving will fit both short and long wetsuit 3 mm thick.

95-metre “Ron” was one of the main ships of the Royal Mail Steam Packet, which often can be found in the vastness of the Atlantic. This ship travelled from Britain to the Caribbean and back. In 1867 the Rhone was anchored, but the weather started to deteriorate rapidly. 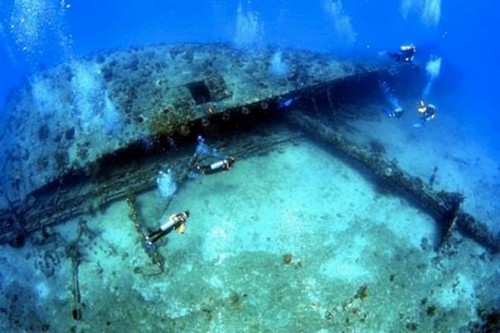 Instead of trying to avoid a storm, the captain decided to go into the open sea, where the ship was in a real hurricane – the most powerful that ever was in the British virgin Islands. “Ron” sank near the island of salt. The ship broke in two and went under water along with 125 passengers and crew. 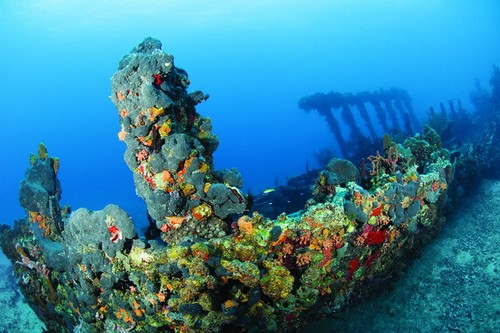 “Ron” stayed under water for nearly 150 years, so that all its wreckage has long been overgrown with sponges and corals into artificial coral reefs that become habitat for many marine fauna. All this makes the dive to the wreck site of this vessel one of the most exciting underwater adventures. “Rona” is also one of the venues for the underwater filming. In 1977, this place was chosen for the filming of the movie “the Abyss”. 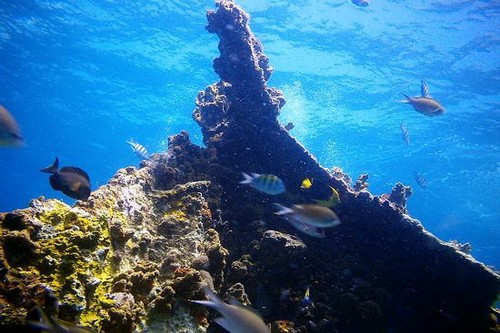 This dive site is accessible year-round, but in August and September, the waters here are the most well warmed up. Water temperature in the range of +26+29°C, so we can safely choose for your dive short or long (at its discretion) wetsuit.

Manta – view of some of the largest undersea rays, the clash that for the first time while diving makes a lasting impression. The weight of these sea giants can reach up to 1.3 tons with a wingspan of up to 7 meters. Manta mainly feed on small crustaceans and plankton, using their capture head fins. 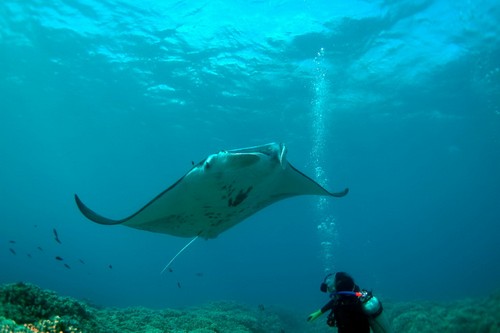 Manta point (or Lankanfinolu) is one of the places in the Maldives where the most common of these rays giants. The depth of the dive near the reef varies from 12 to 50 m. it is best to go on scuba diving with manta rays near the North malé Atoll in the period from February to March. The water temperature is about 28°C.