Habitat jellyfish Turritopsis nutricula — the seas of temperate and tropical zones. They were found in the Caribbean sea, which has long been their only place of residence. But now they master new territory. 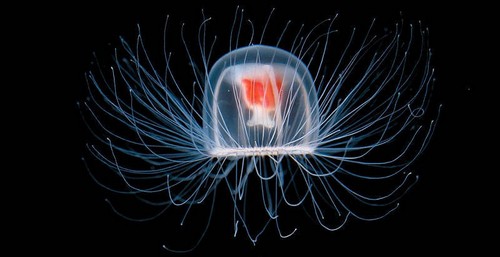 This being only 5 millimeters in diameter, the only practically immortal inhabitant of the Earth. Scandalous discovery lies in the fact that the jellyfish Turritopsis nutricula is capable of rejuvenating. All other types of jellyfish die after breeding. But this is not happening.

The fact that the jellyfish Turritopsis nutricula lives forever, found out recently. Made this discovery was a scientist Fernando Boero, a native of Italy. He conducted experiments on this type of jellyfish, for which several of their representatives in a planted aquarium. Due to unknown reasons the scientist had to postpone the experiment, and the aquarium has been left behind. When Boero remembered about him, the water has dried up, and the jellyfish seemed dead. But as a true scientist Fernando began to study their remains.

And opened his incredibly surprised scientist: filling the aquarium with water, after some time he found alive and healthy jellyfish. Was, Medusa was not killed without moisture. They just threw the tentacles and passed to the embryo. And in a supportive environment were again older beings. This cycle can be repeated indefinitely, that is, instead of dying these animals rejuvenate.

At the moment, scientists believe that this species of jellyfish is the only immortal animal on the planet. To Turritopsis nutricula can die only a violent death. You can cut it into pieces or eat. These jellyfish could flood the world’s oceans, because they multiply pretty quickly, but they have many natural enemies. Many predators eat these jellyfish in large quantities.

Surprisingly, primitive, little the body can do the impossible, namely to control your genes and get the body to move back.

These jellyfish are characteristic only two stages of development: children — polyps, and adult jellyfish. Trying, once again becoming Medusa polyp and then the polyp is reborn Medusa. And so on indefinitely. At the moment is a careful study of these amazing animals who know the secret of eternal youth.