Carp are not uncommon on the Volga. Since the beginning of July underwater hunting me, I will tell directly — no joy. And all because of diving at small depth, up to 5 metres and there are fish is a rare guest. Yes, and the water began to bloom, and appeared in her haze of sorts. Say, at this time the algae are allowed in the water some kind of green — poison, there’s a fish and goes away from such delights. 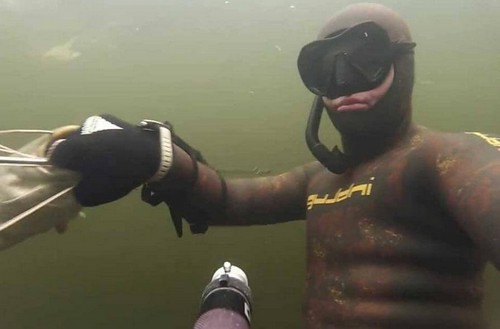 So, in July, the fish gets away and deeper. Spearfishing at this time appropriate at depths of more than 6-7 meters. As soon as I started to dive there, immediately there were trophies, and not a bad fine specimens. For example, the silver carp, is very interesting. Descend to the bottom and bottom on the lookout for. Flocks of sailing and pay attention to me, straight back to back fit. Then come to the cook.

Cupid and I also bottom (of the ambush) saw. Now this method of shooting from ambush is my Forte. The only way to shoot good fish. And small I don’t bother, it lives smaller, and it is not interesting to it to hunt. Such is July we have a spearfishing on the Volga. The most common now — carps, silver carps, grass carps, and catfish began to rise (in August it will be a lot of them especially).

Gear for spearfishing is necessary to buy in checked shops, and even better to familiarize with this item in the catalogs http://www.active-price.ru where the collected range from all stores.

In September, the Akhtuba and Volga underwater hunters a lot. The weather is warm, often calm. The water is relatively clean, although algae are still up and constantly getting in the way. But in the grass the day catches a nice pike, where it feeds on small fish, which at this time is enough.

In General, in September preference night spearfishing. Then actively walks the predator — walleye, perch, catfish, and especially pike. Though they prefer still places deep, around 8-10 meters from the water surface, and the latter is deeper, and mostly in the pits. And not every trick can at this depth to hunt! Although this is a matter of technique and especially experience. The more often you dive, the deeper you go into the water. Not here to argue.

And you need to quit Smoking (for those who haven’t already done so), otherwise you’re not underwater hunter, as well a misunderstanding. And dive will be deeper, and generally are beneficial to health. So I urge everybody to quit Smoking and to start exercising the breath, so it is normal to catch fish.

Because on the surface (up to 8 metres) — just every little thing comes (2, 3 kg). A normal and self-respecting a catch on a fish will eat it, he only “valid” instances of the submit. Exactly the kind of hunting you and I wish!