Africa is a wonderful and great continent. The fauna of Africa are many and varied. 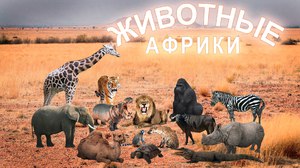 Let’s look at what animals live in Africa.

The fauna of Africa

Africa is home to the following mammals:

Let us consider in detail each kind of animal.

The African Buffalo is a very dangerous animal, especially to humans. Statistics show that this animal year had been killed over two hundred people.

The weight of a Buffalo is up to one ton, the height two meters, and its length more than three meters.

These animals eat only grass. Daily they eat twenty pounds of fresh grass.

Buffalo has huge horns, twisted inside. 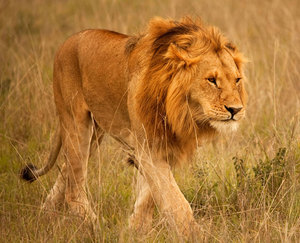 The African hare is a mammal that lives in the Savannah. The length of the hare is up to sixty inches, and weighs three pounds.

The ears of a rabbit are long and have the tips black. Head and body gray. And the legs and flanks are reddish-brown. Abdomen white. The Bunny’s tail has an interesting color. Top is black and bottom is white.

This mammal feeds on grass and then at night and during the day hiding from predators.

The elephant is the biggest mammal. In Africa there are two species of elephants: forest and Savannah. Let’s see what Savannah elephant is different from the forest. 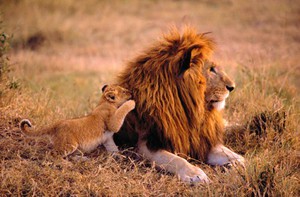 In Africa, home to two species of hippopotamus: the pygmy and common.

The body of the Hippo is gray, covered with a very thick skin. To hippos had not burned their skin, they highlighted the special red liquid, which is still healing remedy.

Hippos mark their territory with their excrement. For this they use their flat tail. They have like a paddle.

The feet of the Hippo is short and thick, have four fingers. Thanks to them, they are easy to move around on land. The head of the hippopotamus is large, and the neck short. Eyes, nose and ears are on the same plane. So the Hippo can stay under water for up to five minutes.

The weight of the Hippo can reach three tons. His height — five feet and a length of four meters.

Live hippos families. The family consists of the leader and fifteen or twenty females.

Bat-eared Fox is a predatory animal. It lives in semideserts and savannas. The animal reaches a length of seventy centimeters and a weight of 5.5 pounds. It feeds on insects and larvae: termites, grasshoppers, beetles, eggs, birds and even small rodents.

Distinguished by its large ears, which are much more head. In height they reach thirteen inches. Color it brown, and the neck and belly a little lighter. The tips of the ears, paws and tail has a black color.

Foxes live in pairs or with the brood. 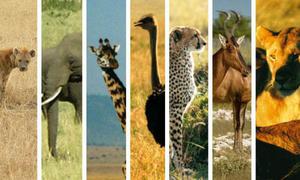 Bongo is a large forest antelope. They live in tropical forests of Africa.

The coloration of these animals is very interesting: dark red with white vertical stripes. The horns of bongos are reminiscent of the spiral. They reach 90 centimeters in length. And the animal itself has a length of one meter. These animals weigh from 200 to 400 pounds.

Gazelle — Dorcas — this is an unusual animal that lives in the desert of Africa could be without water all life.

It feeds the plants: flowers, pods of acacia, leaves, fruit. Of these plants and the animal receives the necessary water.

Dorcas is a small animal. Its weight does not exceed 17 pounds. The animal has long ears. Wool Gazelle has a brown color. The horns curved. 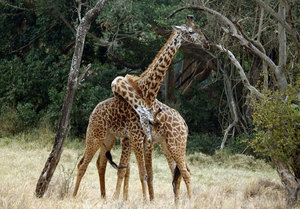 The African wild dog is a carnivorous mammal. They live in savannas.

Inhabited by wild dog packs. Each pack lives up to 18 dogs.

African wild dogs feed on animals. They become the prey of animals such as gazelles, antelopes, Zebra, Eland.

Giraffe — the tallest animal that live in the savannas of Africa.

The growth of a giraffe reaches six meters, and they weigh a ton. His legs are long, and front legs longer than hind legs. The tail is also long and reaches one meter. The head has bony horns. The eyes are large, and the language is rather large, 45 inches.

They lie very rarely. Even giraffes sleep standing up. These animals are very fast moving. Their speed can reach sixty kilometers per hour.

Giraffes live in herds of up to twenty individuals. Life expectancy is fifteen years.

In Africa there are three species of zebras:

They live in different places of the continent, but similar to its black and white stripes all over the body. Zebras weight reaches 350 pounds. The height of the animal does not exceed 1.5 meters and length 2.5 meters. The Zebra tail is quite long, fifty centimeters.

Kanna is the largest and Jumpy antelope species. They can jump up to 2.5 meters, live in forests, mountains, deserts and swamps.

The coat color different from Cannes. Someone yellow – brown, someone blue-gray, and some, actually, black. The horns of these animals are long and twisted. Their length can reach one meter.

The weight of the animal is 600 pounds and grow to almost two meters. Live of Cannes in groups of ten individuals. They feed on leaves, twigs, shrubs, grass, fruits, rhizomes. Life expectancy at Cannes reaches twenty years.

In Africa lives the following subfamily of large and small cats:

Let us consider in more detail some of these types. 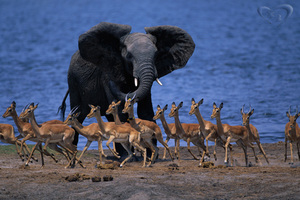 The lion is a carnivorous and large mammal. Their weight reaches 300 pounds, and the length of three meters. They live in small flocks, consisting of several males and females with cubs.

Leopard is a very fast and strong cat. Body length reaches two meters. The leopard weighs up to seventy pounds. Live in the savannas, forests and mountains. These animals live one.

The leopard has a long tail-110 centimeters. Vision, claws and teeth very sharp. This animal can see perfectly even at night. This cat is unlike other cats spotted fur.

Leopards feed on antelopes, hares, monkeys and even birds.

Caracal is a carnivorous animal that lives in the steppes and empty Africa. The length of the Caracal does not exceed eighty centimeters. The Caracal weighs a little twenty — two pounds. On the ears of this animal are black tassels.

This animal hunts by night. His prey can be rabbits, ground squirrels, antelope, foxes, ostriches and others.

Here are the African animals live in Africa!

2 Comments on “Africa and its animals: African animals”