The African Savannah elephant is the representative squad Hootie, of the family elephantidae. It is the largest mammal of our time. The Latin name of the species is Loxodonta africana. Look at this amazing animal closer.

African elephant now has a limited area of distribution – the southern and Western part of Africa after the Sahara desert. Earlier this giant inhabited and North Africa, but later died.

Where the elephant lives 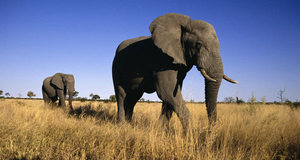 Now the animals have a discontinuous range, especially in the Western part of the continent and are mainly concentrated in national parks and other protected areas. The population size decreases, animals now extinct in the Gambia, Burundi, Mauritania, and the total area of settlement has decreased almost in 6 times, from 30 to slightly more than 5 million km2.

The most frequently encountered of the elephant can be on the territory of savannas in such States of Africa: 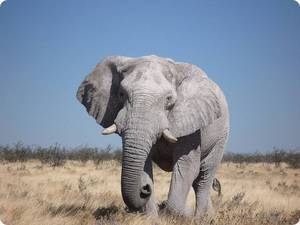 The trunk is long and muscular, with a length of about one and a half meters and weighing more than 130 kg. Is a fused upper lip and nose, with ends in two appendages, ventral and dorsally. It is very agile and strong body through a complex system of tendons and muscles. Here are some more numbers:

Giant ears – an adaptation for survival in arid climates. They not only play the role of a fan, but also due to the impressive square and the excellent blood supply to give the animal a chance to get rid of excess heat.

Like a human fingerprint, the pattern of veins on the surface of ears is unique, it is possible to identify the animal.

The skin of African elephants is very sensitive to the scorching sun and bites from insects, so the animals have to constantly take baths – dust and mud to protect her.

Savannah elephants prefer to live in small families headed by female – animals recognize a matriarchy. Also, to the elephant family include eldest daughter of the main females with offspring and immature individuals — both males and females. As you can see, Mature males in the family are not included.

As soon as the male reaches 10-12 years, expelled him from the flock. Many individuals at first are moved over the maternal herd at some distance, but gradually get used to a single way of life or form of men’s company.

Elephants have an excellent sense of smell and acute hearing but very poor eyesight. Despite the fact that elephants are land animals, they know how to swim, I love to splash in the water.

How to communicate with elephants? They can make trumpet sounds so loud that you can hear them for several miles or to use the language of touch. Often over the corpse of the deceased kinsman elephants make a prolonged trumpet sound.

The main part of my day African elephants migrate in search of food, under adverse conditions of the family can join in the herd.

Sleep adult elephants prefer standing, while old specimens are quite hard to get comfortable because of the impressive tusks, that’s why they have to put on the mound or lean on a tree branch. Little elephants some time will sleep lying on the ground. 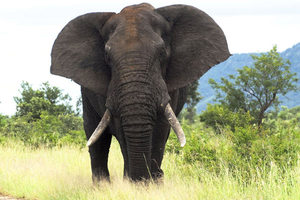 What eats an elephant? African elephants are herbivorous, do eat leaves, bark of trees, stems, roots. Older elephants prefer soft greens of the marsh, which handle even lost the sharpness of the teeth of the animal.

It is very important for these giants, the constant presence of water, because they drink at least 10 liters.

In periods of drought by watering the elephants lined up according to seniority, to quench your thirst.

The appetite of this giant is impressive – during the day, the animal eats about 300 pounds! Often animals are ruining plantations, causing serious damage to agriculture. The food they produce by means of a flexible trunk and tusks, and chew on molars.

As a rule, the offspring of African elephants give in the second half of the rainy season. In the drought period the sexual activity of animals is reduced, females do not ovulate.

To find the female, the male can move across the savanna in a few weeks.

Pregnancy of the elephants is quite long – 20 to 2 months, one baby is born, occasions of the birth of twins was recorded very little. The kid appears a growth of about one meter, weight 100-120 kg of tusks with a small proboscis.

Interesting and the process of birth: the mother is removed from the herd, but accompanies her mother-midwife. A newborn elephant rises to his feet within 15 minutes after birth, but will be when the mother to 4 years. The young females of the herd will surround him with care and attention, as if acting as babysitters. Feed the baby milk, the elephant continues until they reach 2-5 years, but from the second year the elephant can already take solid food. Interestingly, the mother elephant teaches your child to use the trunk: the baby the first time, it is not adapted to this and often stepping on their own trunk.

Births occur every 3-9 years, until the birth of the next baby elephant calf remains with the mother. 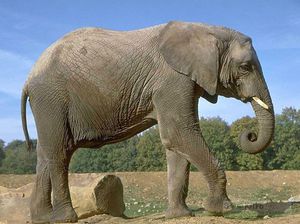 Females are ready to mate after reaching 7 years old, but while living in the adverse conditions this time can be shifted to 19 or even 22 years. Fertility lasts up to 60 years, one female could for his life to make up to 9 cubs.

Males become ready to breed at 10-12 years, but rarely start before 25, because the competition is very strong older individuals. With 25 years males from time to time fall into a state of must, the level of testosterone in their blood increases more than 50 times, causing the animal to become active and aggressive.

Unfortunately, recently in the world every year became less African giants. There are several reasons:

The development of agriculture, development of human land make the area suitable for accommodation of African elephants less and less. Now these animals are protected, live in national parks and reserves, so their extinction was avoided and even stabilize the population. In some cases, even have to restrain the growth of the population by means of sterilization, reduction in the number of ponds and the relocation of individuals to other protected areas.

The role of the African elephant in the lives of people

Previously Savannah elephants were used as commercial animals, giving ivory skin. Were used in various parts of the body: dried meat, foot stools made from the hair of the brush were woven jewelry. The tusks were used for the manufacture of keys of piano. In the middle of the 19th-20th centuries each year from the hands of the person killed up to 100 thousand elephants. However, due to the sharp decline in the number of animals were taken under protection, their shooting is prohibited.

Now African elephants are often used as the object of eco-tourism – people come from all over the world to look at the lives of these amazing creatures in the wild.

In conclusion, we offer you to familiarize yourself with some fascinating facts about African elephants:

Savannah elephant – a real giant in the world of mammals living on the African continent. This amazing animal has suffered, but it was saved from extinction. Now the elephant is safe, but lives mostly in protected areas.

5 Comments on “African Savannah elephant: what to eat and how to live”