International African ostrich from 1758 is considered to be a Struthio camelus, Linnaeus.

The biological name of this bird in Greek it literally means “Sparrow-camel.”

This name originated because of its characteristic features: the ostrich has the same expressive as a camel’s eyes, with big eyelashes, as well as two-toed limbs and breast blister. But, compare the ostrich with the Sparrow, likely to become due to the existing underdeveloped wings. 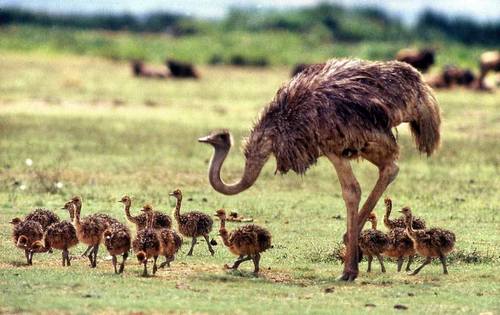 The ostrich is a bird or animal? African ostrich is considered to be unique in nature a bird that can’t fly and has no keel. This bird has only two toes, which is also a kind of exception among other representatives, members of the class of birds.

Ostriches are the largest birds on our planet. The average height of the adult reaches 2.7 m, and the weight comes to 156 kg. However, the average weight of an ostrich, usually is around 50 kg. it Should also be noted that the males are much larger than females.

The skeleton of the ostrich is not considered to be pneumatic, with the exception only of the thigh. The end of the pubic bone has fused, forming a closed basin, which is also very unusual for other species of birds.

As mentioned previously, the keel of these representatives of the class of birds is completely absent. The sternum of the African ostrich is underdeveloped. On the surface one can notice a bare area of thick skin, which is a breast blister. This corn plays the role of supports when the bird rests on the surface of the earth.

As the front limbs are underdeveloped wings, each of which has two fingers that end in sharp claws. Behind the bird a long, strong, muscular legs, which also has a two finger. One of them is a kind of hoof, which acts as a support while running.

The African ostrich is loose and curly tail. The feathers are distributed evenly throughout the body. On the head, neck and leg feathers are missing, instead, the skin in these areas covers soft and short fluff. Feathers birds have a primitive structure: the barbs almost interlock with each other and do not form webs. 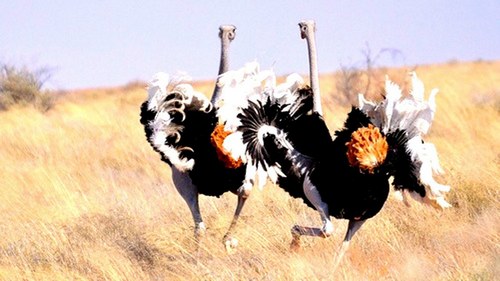 The African ostrich feathers are very beautiful and a lot of them:

Males from females to distinguish very simple. The plumage of the adult male black except for the tail and wings, which are painted in white color. Females are more nondescript. Their plumage is gray-brown hue, and the wings and tail look off-white.

Ostrich can be called omnivorous birds. Despite the fact that the diet of juveniles consists mainly of animal food, adult birds consumed more vegetation.

Their main diet consists of:

However, adult ostriches do not refuse from various animals:

The birds have nothing to chew their food, therefore to improve digestion they use sand, small stones and splinters, pieces of plastic, metal and even nails. It is worth noting, that individuals can few days and starve. Like camels, these individuals a long time can live without water. Animals will be enough liquid that they drink from the green mass of plants. When ostriches get water access, they are many and readily drink it. With great pleasure these birds love to bathe.

Where are the ostriches?

Where live ostriches, and that is their way of life? These birds live in Africa. Birds tend to avoid rainforest and prefer open grassy areas or semi-desert, located North and South of the Equatorial forests.

Animals tend to live, organizing a family group, consisting of Mature males, 4-5 females, and their offspring. Often the number one group up to 30 individuals. The young that live on the South of the area, living in groups of up to 100 birds.

Often African ostriches share the pastures with herds of antelopes or zebras, and animals and birds relate to each other peacefully. Together they travel to hot Savannah. Due to high growth and excellent eyesight, the birds are able to notice the approach of a predator and quickly run off. The length of one step is 4 m. the Speed of an ostrich reaches 70 km/h. These animals can sharply change its direction, without reducing speed. Young Chicks are not inferior in speed of running to their parents. At the age of one month they are capable of speeds up to 50 km/h. 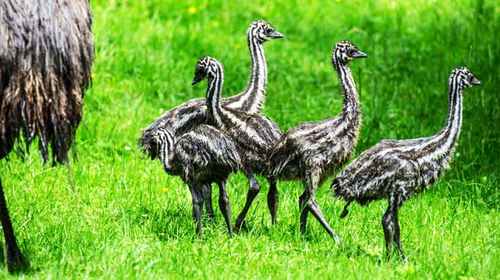 During the Pleistocene and Pliocene on the planet, there were several varieties of these animals, which lived in the near East and Central Asia, India and southern regions of Eastern Europe. The lack of control extermination ostriches became the reason of sharp reduction of their population. Currently, the only type includes 4 subspecies that live only in Africa. According to the surviving subspecies are the following: