In the dense taiga forests are home to beautiful wild animal – the sable. In this animal there are many subspecies which vary depending on the size, color and quality of fur, as well as the area of habitation.

The name of this subspecies is the place of dwelling, for example: Angarsk, Eniseyskiy, Kamchatka. Barguzin sable is different from their counterparts of relatively small size and dark color skin. 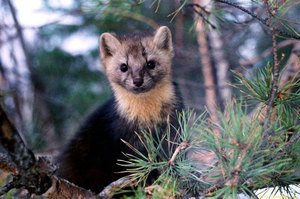 Barguzin is the possessor of valuable fur

The Barguzin sable is a carnivorous animal belonging to the family Mustelidae. Nature gave him a beautiful coat. Very soft and lightweight, silky to the touch fur has a good durability. Thanks to its characteristics, it is more valuable than the skins of other subspecies of sable.

The color palette of the fur varies from very dark to light brown. On the neck there is a bright spot. The darker the color of the skin, the higher its value at auction of the furs. 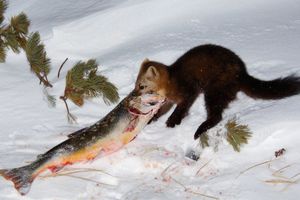 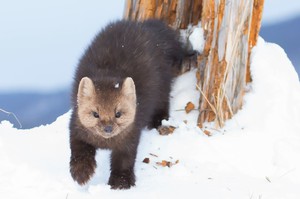 Excellent quality and beauty fur made of Barguzin sable the object of ruthless extermination from ancient times. Hunted sable everywhere in Siberia, despite the declining number of individuals, so in the first half of the twentieth century in some taiga areas is almost gone this valuable animal.

Currently the situation has changed. Performed security activities, carried out the fight against poaching, introduced strict accountability and frequency of hunting. All these measures contribute to the fact that the disappearance of the Barguzin is no longer threatened.

Before the establishment of the deep snow cover on fur-bearing animals hunting with dogs likes. When snow moving on the traps. For season workers in commercial farms produce 40 to 50 animals. 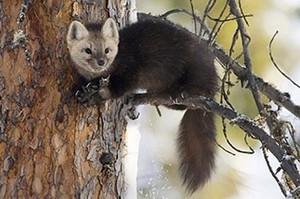 This beast is quite strong for its small size. Agile and nimble, it moves by jumping up to a length of 70 cm.

Paws of the animal broad and covered with thick fur, so it is convenient to get on the snow without sinking. Sable has excellent hearing and sense of smell. It is most active morning and evening. 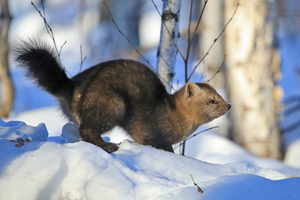 Barguzin sable got its name from its habitat – the Barguzin mountain range on the coast of lake Baikal. Now its area has expanded considerably, the animal can be found in the Siberian taiga and the far East.

Barguzin prefers rugged coniferous forests, especially cedar. He settles on the most littered places where there are stone deposits, thick bushes, fallen trees. 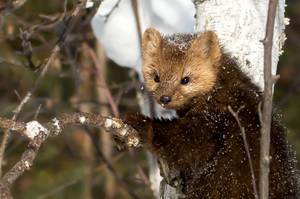 Under the twisted roots of trees or in hollows of often the beast, and satisfied his lair. Cozy mink the animal is clean.

Mainly sable moves across the land, sometimes climbs the trunks in the trees. His territory he restricts labels, making there own trails and trying to get rid of other small predators. On the chosen land animal lives 2-3 years, then goes and picks a new place to live. 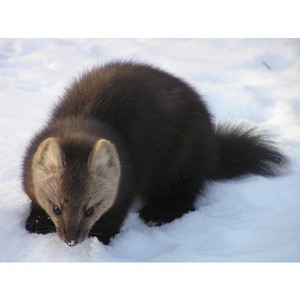 Mating animals ready from the age of two or three years and better offspring until around the age of 15. After mating, the male is close to female and brings her prey, so she could maintain strength during pregnancy.

Cubs are born blind and helpless in the spring for 3-4 pieces in the litter. Female touching cares about his offspring. She desperately throws herself at any enemy, if the kids in danger. Sables are in the lair up to six months, then they start to come out and learn about the world. In the middle of summer grown young starts an independent life.

Barguzin sable can be attributed to omnivorous mammals, although the basis of its food consists of small animals: 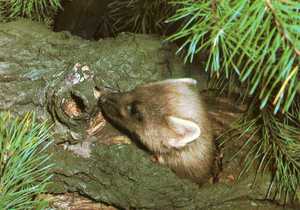 Sometimes, the sable can get even a capercaillie or black grouse, which roost in a hole in the snow. He can enjoy and fell as well as fish out of water.

Despite the predatory nature, the sable is not averse to eat pine nuts and taiga berries: cranberries, cloudberries, blueberries. Will not give the beast on occasion, and from the honey of wild bees.

But the food sable can come across large owls, Martens, and bears. 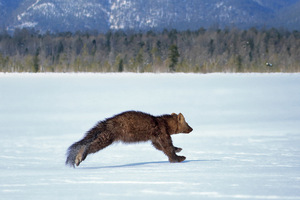 When the breeding and rearing of the predator in captivity, there are many difficulties. Despite compliance with all requirements in content, only a quarter of females able to conceive. Stress the animals caused by the presence in the cells, resulting in more late puberty. It is not always possible to maintain in the enclosure temperature, close to natural weather conditions. 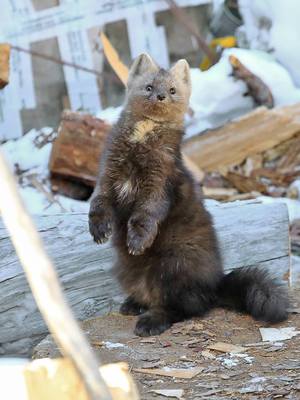 The quality and beauty of skins is directly dependent on the lighting, so it is essential that all cells were illuminated by the sun, in conditions of large farms may be problematic.

Animals should be provided with a variety of balanced meals:

Despite the difficulties of breeding sable in captivity, this business develops successfully and gives tangible results. In addition, there are farms that raise animals specifically for further resettlement in nature and replenish the population if necessary. This measure is intended to protect a wild animal from total annihilation.