Indian wolf is a subspecies of grey wolf, between the size of Tibetan and Arabian wolf, found in the arid and semi-arid peninsular plains of India.

Indian Plains Wolf are listed as endangered and closer to the jackal in size,
mainly distributed across the states of Gujarat, Rajasthan, Maharashtra and Madhya Pradesh.

Himalayan wolves are listed as an endangered species and only found in northern India in the Ladakh region and few parts of Uttarakhand and Himachal Pradesh.

Tibetan wolves are genetically same as Himalayan wolf and lives in the alpine meadows of the Nanda Devi National Park in Uttarakhand, also reported from Bageshwar district of Uttarakhand. 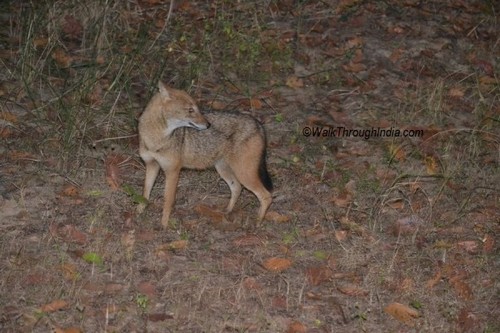 Indian Jackals are predator and scavenger both and one of the most common carnivore animal, found variably every where. Golden jackal are found living in the Thar Desert, in the slopes of the Himalayas and river valleys of India.

The Red fox is the largest species of foxes found in India and one of the prime wildlife species from the list of flora and fauna of Ladakh around Nubra, Zanskar and Indus valley.

The White footed fox is known as desert fox in India and is the Asiatic subspecies of red fox, found in the dry region of Indian subcontinent from Rajasthan to Kutch of Gujarat state.

Dhole dogs of India are canid native to Southeast Asia and also known as Indian wild dog or red dog. Indian wild dogs are highly social animal, listed as Endangered, living in pack and competes with tigers and leopards in the forest of South India.

Striped Hyena is not a Canidae and is the smallest member of the true hyenas, native to Middle East and the Indian subcontinent. The striped hyena is a nocturnal animal,a scavenger and found in some large number in India in open areas of Blackbuck National Park.

3 Comments on “10 Members of Wild Dog Family of India”