A large Panda or bamboo bear — a mammal belonging to the bear family. This ancient and valuable animal, the symbol of China. It so there is love and respect that he has put under the protection of the law. For killing an animal could face the death penalty. To mix it up with anyone is difficult, due to the characteristic black and white color. The mountainous territory of the Republic of China: Tibet and Sichuan — natural habitat, which is home to pandas. Prefers to live in mixed coniferous forests where there is bamboo. 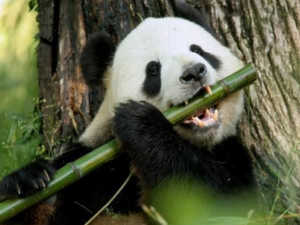 Two pandas called the Asian predatory species, similar in appearance and lifestyle, but belonging to different families. Despite the identity of the bear, the Panda has long ranked as the raccoon representatives.

The bear has a pretty big buildwith an average weight of 70-120 kg and height up to 1.5 m. Males more than females by about 10%. Body they have long, dense fur cover. The tail, unlike the bear, long. The legs are short and massive, with small feet. When walking, it comes on its hind legs. To facilitate the capture of the bamboo, between the fingers are leathery pads. Molars are flatter and wider, allowing you to grind up bamboo stems. 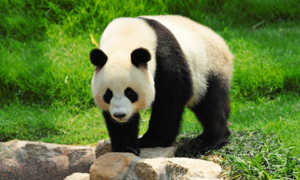 Head, though huge, but proportionate with the body. The muzzle is blunt, on top of large ears. Stand out in a standard black color on a white background: points around the eyes, markings on legs, shoulders, and ears. The seeming calm of the bear is deceptive. With its sharp claws, it can cause substantial harm to the enemy. A characteristic feature is the protruding thumb on the feet.

Where live pandas and characteristic behavior

In the natural world, pandas have a limited perimeter distribution — wet forests of South and Central China. The approximate area of occupancy of the mainland is 30 thousand square km, which Is quite secluded individuals, not encroaching on the territory of their fellows. Each marks the possession, leaving scratches in tree bark. They perfectly climb trees and swim, but prefer to live on the earth.

They are most active at night. Day are deposited in hollows or rock crevices, where they may be in a strong sleep.

There are a number of interesting facts associated with lifestyle:

It seems that the bears are very silent but they emit unusual sounds when communicating. This is reminiscent of the bleating of the goats. The irritation or anger, they are menacing growl or hum. Champ says about alert bears, better for him not to approach. Puppies can squeak and squeal.

Reproduction of the giant Panda

With the onset of the breeding period, females dramatically aktiviziruyutsya. To attract males, they emit an odor. According to scientific observations, this behavior is typical for sexually-minded individuals. The male begin to compete for the championship, trying to win your favourite bear.

The mating season lasts from March to may. Estrus lasts 2-4 days, when the former vigor in females takes place. They become too restless, lose their appetite. After mating, pregnancy lasts about 5-6 weeks. Cubs are born in late summer or fall. Kids are blind and helpless, with a light fuzz. The weight of each in the range of 50-160 gr. 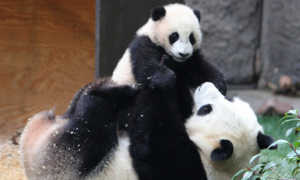 Mama bear shows gentle care to your kids. Helps them take a comfortable position for sucking milk. Up to 15 times a day newborns are put to the nipples. The duration of each feeding for at least 30 minutes. In 3-week age they already can open your eyes now, and in 3-4 months they begin to move independently. When mother bears remain up to 18 months, and milk leave in weeks 45-46.

It should be noted that pandas in captivity breed poorly. Often twins are born. Of these, the female chooses the strongest for him and caring. The second usually dies.

What to eat giant pandas

The name “bamboo bear”, speaks for itself. These animals are carnivorous, although the main diet they herbal. They have adapted to use of the order of 30 varieties of bamboo trees. In the food are the roots, young shoots, old stems. With its strong jaws, they grind hard areas of the wood.

Their digestive system is fully tuned in to the digestion of such materials. The esophagus and the stomach is lined with mucous membrane, which prevents injury from splinters. As the vegetation is poorly absorbed, the bears have to eat up to 15-18 kg per day. So, they can maintain their vitality. All while awake, about 10-12 hours a day, they constantly chew.

Poor diet does not allow giant pandas to store energy for a long time. This leads to a limited perimeter, where they can live. Just not strong enough for long passages.

Take the water mainly from bamboo stalks. Every day we go down to the ponds, and there absorb the missing volume.

Today, the average lifespan of a Panda is 25-30 years. As soon as the world learned of such outlandish bears, increased the number of poaching raids. For the valuable skins of these animals are constantly hunted. Despite the harsh punishment for killing pandas, the high cost of production overpowers. In zoos — this is one of the most popular instances, always attracting the attention.

One Comment on “A large Panda or bamboo bear”