The Fox is a predatory mammal that is a canine. This extremely attractive predator with a long and fluffy tail. No wonder in the old days there were a lot of fairy tales composed with the predatory beauty.

The group of foxes is included only 11 species. The most common is the common or red Fox. 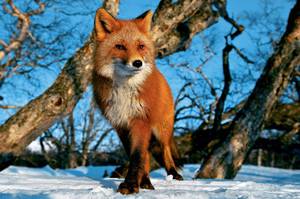 The red Fox belongs to the largest representative of its kind, its weight varies from 6 to 10 kg. body Length (without a fluffy tail) is from 60 to 90 cm but the smallest Fox — the Fennec Fox, whose length is 30-40 cm, and weight not more than 2 kg.

The predator prefers to live in the steppes, the tundra, the forest and the desert. In recent times the inhabitants of the villages or outskirts of the houses complain about the machinations of Fox. People not happy with this neighborhood, because Fox likes to eat Pets (birds, ducks, geese, etc.). And the predator does not stop even the presence of dogs in the house.

Colors of foxes depends on the area of its habitat. So, in the desert you can meet grey-yellow Fox in the North — red. The fur of the foxes long been a very valued and is considered the most beautiful, so predators are cultivated even on farms.

The diet of foxes 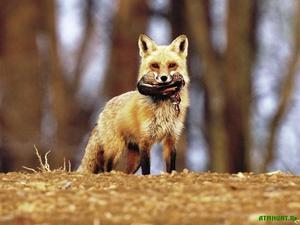 What eats a Fox? Although it refers to the predators, the diet of its power is very great. Of course, the basis is meat. The diet of the predator can enter more than 300 different small mammals, rodents and birds. The diet of foxes depends on the time of year and the place of its habitat.

What eats a Fox in the winter? The most attractive kind of food at this time of year are rodents. Often, family polyukovich. Hunting foxes on rodents reminiscent of hunting cats. Fox also uses the element of surprise, tracked down the victim, attacking her without a chance. This process is called the main item on the.

In the winter the Fox will carefully examine the plantation and the banks of rivers in search of birds, she can eat and carrion. Bird catches small and large. Does not go past the eggs and Chicks. In the forest a predator likes to eat rabbits, if it finds a rabbit hole — destroys all rabbit kind. Having met the ROE, too, will not pass by. Well, near homes, she is not averse to look into the chicken coop. Here’s a rich diet of the Fox even in the winter time.

What eats a Fox in the spring and summer? This time of year, the predator feeds on tight enough, because at that time her cubs. At the end of March the cubs are born, within six months, they feed on mother’s milk. Usually 5-6 cubs born. By the end of April they are already beginning to play on and off the holes. Mom and dad are already beginning to spoil my kids a living food. During the period of feeding young foxes may hunt larger birds — swans. The cubs bring rodents to develop their passion for the hunt.

In addition to its main food, the Fox can eat berries and fruit. Usually this technique is used by foxes who live in the southern regions.

Food foxes in the desert is different. Here sharks and reptiles, beetles, larvae, earthworms. She often catches from the waters of the dead fish.

In the forest foxes have hard times, as food in this place not so much. The basis of the diet consists of small rodents and birds.

The power of the predator at home 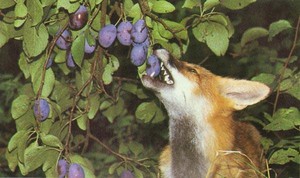 Currently increasingly you can see people have unusual animals, including predatory. Of course, to have a predatory animal in the house is recommended in small age. Wild Fox you can keep the house, but you must create the necessary conditions for a normal life. Including need to pay attention to nutrition of the predator.

Keep the Fox should be in a cage. To keep the apartment the predator less convenient than in a private home. It will require a large cage, where Fox will be able to play. For the toilet to need a box of sand. To teach a Fox to such a tray will not be difficult. You need to release the Fox from the cage, at least when the owner is home.

It’s better to feed high quality food for dogs, and for variety, you should treat a Cougar with berries and fruit. But let’s not forget that Fox is also a predator, you can feed her chicken giblets and gristle.

It is forbidden to feed the foxes raw fish and bones. Young Fox cubs, as a rule, feed milk or dairy products. But getting the animal home, you should be wary of her behavior, which may not be completely predictable, and at times, dangerous even to the owner.

Thus, the diet of foxes is pretty diverse. It depends on the nature and conditions of stay and time of year. Someone thinks that Fox can only eat meat, however, in addition to the basic diet, it may eat more fruits and berries.