The mole is a funny hero of many cartoons, inhabitant of forests, parks and gardens. Of his presence, we can guess at the numerous piles of discarded burrows of the earth. Many saw it. Black furry like a stuffed animal. He has big front paws to the sides.

Front paws the mole makes underground tunnel. Gardeners are seeing is typical of a handful of land in their area, want to get rid of moles as pests of the crop. What eats this animal? Except the roots and other roots? 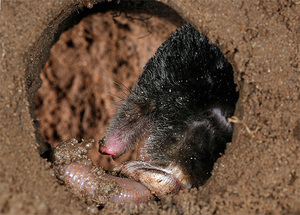 When we understand who the moles, we will be able to better understand what they eat. Practically a lifetime animals spend in their underground passages. Their body is optimally adapted to this way of life. The inhabitants of the dungeons special front paws like shovels. Short fur grows in the direction not backwards, like most animals, and up, allowing the mole to move in its course forwards and backwards. The fur wears out quickly about the earth moves, so the moles fade in 2 times more often the majority of animals up to four times a year. The tail is very sensitive. With the help of the hair growing on the tail, the animal feels when driving in reverse.

Moles inhabit river valleys, forests, forest edges, meadows, fields and gardens. Not like the sandy and marshy soil. You can even swim across a small river! They derivat move to the river, swim across and continue the course not the other side. These animals are not rodents, so they can not gnaw the earth cutters, and dig up only paws. So love the soft mellow ground, that’s part of what attracts them to the gardens.

The specialists conducted research, catching moles and exposing their carcasses. The study of stomach content showed that the animals mostly eat invertebrates.

According to the statistics in their stomachs were: 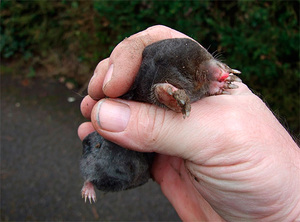 Indeed, it turns out that, by their nature, moles are carnivores. This is confirmed by other scientific facts. The internal structure of a denizen of the dungeon like a predatory animal. Particularly the structure of teeth and digestive system is similar to the structure of these organs from other predators. Well developed sharp fangs and incisors.

Pretty weak gums teeth less necessary predators than herbivores. Short intestine, because meat is easier to digest than the fiber part of plants. In the animals is another characteristic of animals, eating meat — fast metabolism. Animals belong to the family of Insectivores. Next-of-kin too, are predators. This shrew, muskrat and shrew.

Mole — insectivore an animal. However, the diet does not end with insects. Underground Raptor can handle even small snakes! But can also eat frogs and mice. Animals are very aggressive and in rare cases cannibalism. Not tolerate other dogs on his aft station. Animal eats almost any small animals within the cave.

They live in forests, in gardens and fields. This is different biotic zones, therefore, the food the master of the dungeons here is different.

What is the mole in nature

In the woods animal feeds, as everywhere, his favorite food — earthworms. However, here in the summer in the food are large ants, millipedes and woodlice that crawl randomly in the underground tunnels, they make up one third of the diet.

In the meadow, as elsewhere, the mole eats worms. But here they diversify the diet of the adult insects and their larvae as pests of plant roots. Animal can eat beetles, caterpillars, wireworms. In the meadows more light than in the forest, so grasses here grows more and more roots, which means more animals and their eating catches moles.

What do moles eat in the garden? All the same earthworm, and different garden pests. The animal eats the mole cricket, the beetle, will eat slugs. Particularly attractive to moles places on the border of gardens and forests. Here and food is very diverse, and the soil is soft.

What moles eat in the winter 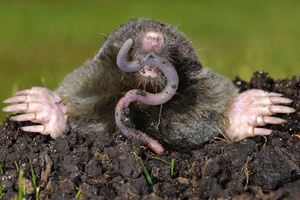 In winter these animals do not go away, so in the cold they need the same amount or more food needed to keep warm in the cold.

Winter eats about the sameas the summer, but in the cold season in the ground, almost no bugs, and ants, first mostly die in the fall, the second fall sleep in the nests until spring. The winter remain in the ground, only their larvae, they just eats underground predator. He caught wintering in the land of the pupae of beetles and butterflies. Eating overwintering in shallow burrows of wasps and hornets.

Happiness moles, his favorite food – rain worms, remains in the ground. In winter, the worms burrow deeper into the soil and fall into suspended animation. Moles make their winter food. The view that if a worm be cut in half, you get two worms, erroneous. This happens with other worms, for example, are intestinal parasites. From earthworm to regenerate can only the front part of the body. Using this, the Mole occasionally eats the front part of the worm and the rear, unable to regenerate, dies and remains inside the mole’s progress as a food reserve.

Often moles in the summer, when worms a-plenty, and make the winter stocks of living paralyzed worms. They bite through the ganglia of the worm, paralyzing the animal. Because of this, the worm dies immediately, and is unable to crawl away, but remains in underground passages. Moles often make a special storage rooms, where to put the paralyzed worms.

The enemies of moles 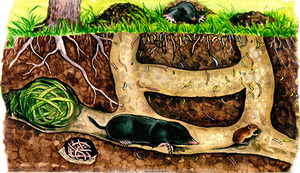 Despite the fact that the animals almost spend all their life in underground tunnels, are predators, Lagomasino them. The moles are still sometimes crawl out for different reasons on the surface, here it comes across a helpless animal in the clutches of a predator. The mole cannot escape because the front legs directed laterally, therefore, appearing on the surface, it can only crawl. Foxes and raccoon dogs sniff out underground dwellers. Their sensitive nose feels the closeness of the mole under the earth. Sensing the animal, they quickly break paws the ground and get him out of the hole. Because of the unpleasant odor, they often drop their loot. But, once on the surface, the moles die.

Hunt for moles and weasels.

Moles do not included in the Red book, hunting them is allowed. Therefore, they are sometimes mined people for skins. 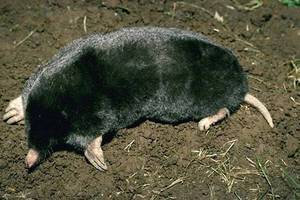 Moles do not eat roots, they are almost completely uninteresting plants, however, they can damage garden plants. They dig the moves in the soil level where the roots of the plants, because that’s where insects and worms. Often the roots of the plants are in their tunnels. And once out of the soil, the root dies, the plant begins to hurt or even dying. Moles, as you know, eat worms, and it is very useful for garden animal. They make small holes in the ground, helping her to breathe.

It turns out that the moles are both useful and harmful animal for gardeners. They eat pests, but they sometimes can harm the plants. However, seeing the mole hole near thetennis root crops, do not rush to think that it’s the mole’s fault. No, he ate the one who ate the root.