If you would time travel was a reality, this would be a great opportunity to visit distant Triassic period, to travel for a few tens of millions of years ago with only one important goal – to see the ancestors of modern turtles with my own eyes. 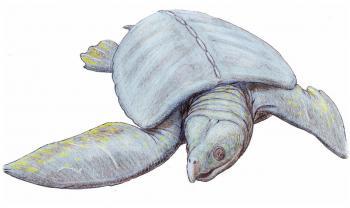 Arkhelon, is a nickname wore a three-ton amphibious beauty. In length this species can reach five meters, the head was the seventh of the entire length of the torso. Moving these giants thanks to the front fins, similar to the giant wings. The main diet was jellyfish and existing in a considerable number of crustaceans. Be wary of such individuals had only sharks and now extinct, similar to giant snakes reptiles – mosasaurs. During the breeding turtles lay their eggs, climbing on land, and then again to the rest of the seabed.

Turtles – Atlanta weighing about four tons unlike Arkanov lived mostly on land and was considered the most massive species of all known land owners shell. Despite its size, differed in fearfulness, in the event of the slightest threat with uncharacteristic speed to push the head under the carapace. The food give preference to different kinds of vegetation.

Another ancestor of modern turtles were Proganochelys. This is one of the species of extinct tortoises, which are of great interest to scholars and researchers. This applies to species suborder Proganochelydia. Mysterious suborder also keeps a lot of mysteries and secrets. The oldest turtle known to science, has about two hundred and thirty million years. Unlike fellow its main characteristic was not a giant size, and the presence of teeth and a Horny beak and still have some primitive characteristics. Proganochelys could not pull the limbs and head under the shell instead of legs and neck was covered with hard pointed scales, which performs the protective function. This distinguished them from the majority of modern turtles.

In the modern world a considerable size can boast only, perhaps, Seychelles turtle. The name of this reptile was due to the only habitat – the island of Aldabra, part of the Seychelles group of Islands. The Seychelles tortoise is a large amphibian, reaching one hundred and twenty centimeters, has a stocky body and quite small head. Their population is not high.

An interesting fact is that the theory of evolution tortoises still remaining scientists. Primarily, this is because until now it was not possible to find the remains of transitional forms of this species, although it should be noted that the fossilized remains of ancient turtles found is not enough. There is an assumption that its origin, the turtles take on the most primitive reptile cotylosauria.

Turtles clearly feel any slightest of tremors, that sort of interchanges their specific hearing. They are able to capture only low-frequency sounds at an average level of fifteen hundred Hertz. You should note that the auditory response is required only during the mating season, when males by a loud low roar to attract a female. They have excellent vision. Land representatives are able to distinguish full spectrum of colors and to choose the right plant the most bright juicy colors. This is complemented by a well-developed sense of smell and sense of direction.

If we consider aquatic species of amphibians in this class, it should be noted they are quite addictive to the host, the ability to learn nursing and to provide him with a variety of signs of welcome. Although it may be much easier and the pet is just waiting for the next delicacy.

Modern science has almost exclusively studied the turtles, but that’s not all. In the world there are about 230 species of turtles, and with the subspecies and also 350. Today, scientists often argue to what kind can be attributed to one or the other type, and the names of these genera and species. So you can often find differences in lists of species of turtles.

Turtles live everywhere: in the Sunny desert, in rivers, in forests, swamps, oceans, mountains and seas. However, an important condition for them is the presence of heat. As for procreation, they need the presence of warm water. Most of the species of turtles are on the brink of extinction, as they destroy them for gourmet cooking and for the needs of folk medicine. According to the data, every third turtles die from fishing craft. So now more than ever need the help and protection of man.