Black ferret, as it is called, or, more scientifically – common ferret is a small animal that belongs to the genus of Mustelidae. It is quite famous among pet lovers.Despite the fact that it is only wild beasts, he often give birth at home, because the one great root and without any problems living with people for many years.

The fact that he is able to build relationships with people, no doubt, good. But it would be useful to know what is this animal, where its ordinary habitat, what it eats, is it a predator or herbivore, what are its habits in the wild, and more.Dr. 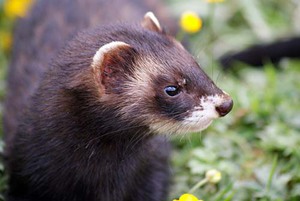 Winter frost and hunger are pushing wild ferrets to move closer to the human dwelling. Perhaps this fact explains the beginning of the relationship between ferret and human.

Let’s start with the issue where there are black ferrets?

The population of these animals distributed mainly on the European continent. Also, it covers the whole of Western Europe. Black ferrets occur on the lands of Ireland and the UK.

In our country, the habitat of these representatives of the weasel family stretches from the Western border and ends near the Urals. They live,we can say, almost everywhere, only the territory of the Caucasus to the mouths of the Volga, in the Extreme North and in the Northern part of Karelia and the far North these animals we will meet. 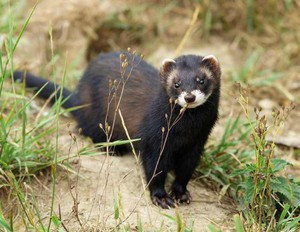 Forest ferrets for your stay choose these areaswhere there is:

In these localities to meet such a creature on the forest edges and clearings, where the vegetation is not too dense.

Ferret prefers to live near water:

Despite the fact that now the polecat is a pet, people who live in rural areas, this animal attitude sometimes very negative. And the reason is the custom of wild ferrets quite often, especially in the winter, cold months attack chicken coops and other homes with poultry and eat chickens, Chicks, ducks, geese and their offspring.

The polecat is a valuable fur-bearing animal. In older years, the product from the skin of a ferret was considered very valuable and prestigious due to their valuable qualities. In today’s world, hunting them is prohibited. as the population size decreased significantly, and the animal registered in the Red book.

The size of the animal, in appearance it does not differ from other representatives of its family. But at the same time, describing the appearance of this animal, it should elaborate on some characteristics. 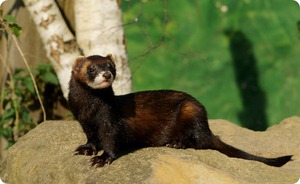 View of a forest of black ferrets not for nothing is his second name, which indicates the area in which this species most often lives. the habitat of these animals – small forest.

The polecat moved a long low jumps, pretty good swimmer. In trees it is usually not leset, but in those moments when he faces mortal danger, he is able to climb in hollow trees, which are located low to the ground.

If you are a lover of this animal and want to have as a pet,the question is a predator whether or not it is fundamental. About nutrition ferret need to know everything.

Ferret, no doubt, predator. In this regard, the answer to the question, what to eat ferrets in the wild, will be contributing: this is due to the needs of his species. What is included in the diet of the ferret?

In the diet of the ferret typically consists of: 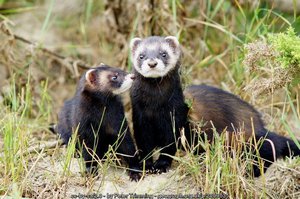 To remedy the lack of fiber and other necessary nutrients can ferret through the consumption of stomach contents of herbivores they caught.

With the arrival of spring to the end of the inwinter months polecat no difficulty finding food for themselves. Before the approach of winter he began to eat to create more body fat. When come the cold, food becomes much more difficult to produce. But our animal is a predator, and this means that a born hunter. He was not discouraged and begins to dig in the snow. Then it becomes prey, not only small rodents but also large birds – grouse, black grouse, buried overnight in snow. When eating absolutely no no, the animal does not pass by and fell, and wastes of human food.

Ferret alone, he communicates with females only in the mating season.

Each individual of this species has its own hunting grounds, he is their “herding”, that is, living on them constantly. Their hunting territory is usually quite extensive, the males it takes up to two and a half thousand hectares. Females have a territory feeding usually smaller, sometimes part of them overlaps with the territories of males, sometimes partly included in them. circumambulating their possessions, ferrets leave her label, so that others know that the place is busy and guarded.

In inconspicuous place ferret digs for itself the burrow with a short hole and a pocket where the rest. Mink is in the nature of permanent residence. But if it is in the home of someone scared or otherwise compromised, then the ferret is leaving their old housing and looking for another place to stay.

Sometimes for permanent residence , he chooses the remnants of dry twigs or a hollow under an old tree stump. When the woods are full of food, well-fed and contented animal sleeps during the day, and the activity begins to manifest in the dusk and at night. If on site the feed is not enough, he goes on the hunt for long distances. In the adverse bad weather days the animal can not get out of the hole.

The behavior of the ferret

A distinctive characteristic of the wild ferret is the courage with a touch of aggressiveness. When meeting with an enemy even stronger than him in power and size, our hero fearlessly rushes into battle. Also, the ferret is merciless to his victims if he entered the coop, it will kill only one bird, but all remaining – suffocate. The same behavior he repeats in nature: attacking a birds nest, he will kill all of its inhabitants, although he will eat quite a bit.

The enemies of the forest polecat 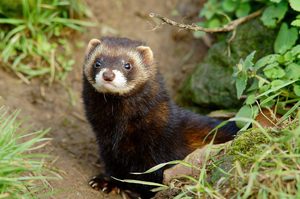 Ferrets forest, as we have already explained, animals are not too big, so in the wild they have enemies who can hurt them or kill.

The main enemies should be written first wolves. Despite the fact that ferrets are very quick, to get away from large animals in open areas where there’s nowhere to hide, it is, however, difficult.

Foxes also attack our hero, especially in winter, when very little, mice are either there or they are not satisfied, and the rabbits too quick and is not always granted if they are to catch.

Among the larger birds also have a wish to catch the animal: at night is an owl and owls, and falcons and Golden eagles.

Lynx is another animalthat likes to eat ferrets. the deadly teeth of the wild cat, her resourcefulness, cunning and dexterity do not give up hope on the life of this animal.

If the ferrets occupy the territory in the steppe zone, the threat it will represent the stray dogs.

Although, frankly, the most ruthless and terrible enemy for the ferret, is able to increase the population until the complete destruction, however, people. It is because of our mind, this beast is listed in the Red book.