Africa can be called, perhaps, the most mysterious and at the same time dangerous continent on the planet. Savanna, plains and rain forests pose a lot of surprises around the bend tourist can expect anything. The nature of the African continent, sometimes even virgin, some of the land still untouched by man. Life in the natural environment of animals taught to be cautious, predators learned of the matter and finely honed skill of disguise, the victim of a predator skillfully can hide and have lightning-fast reaction. 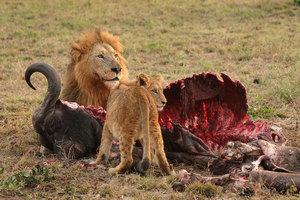 On the African continent to predators considered not only graceful felines, and also crocodiles, poisonous insects, snakes and other carnivores.

Predators of Africa — a special group of animals, which include animals, whose way of life has no meaning without hunting. Food predators eat meat.

On the African continent is home to several species of predators, here are some of them: 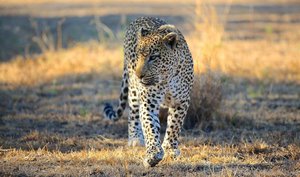 The African lion is called the king of beasts.Luxurious, powerful predator terrifies not only at potential victims but also commands respect from the tribesmen. Lions have manes luxury, no more than one feline mane no. This predator is harmoniously built, has great strength and the capacity to hunt large mammals such as Buffalo, Zebra, antelope.

In their natural environment, lions prefer open spaces, preferably with nearby water. Leo is extremely lazy, most of my life it idles, not counting those moments when you need to protect your territory. Dinner involved a lioness, they bullied the victim, and the lion coming up later and picks the best meat. The lion hunting opens in case of long starvation.

Cheetah is rightly called the fastest animal in the world. 3 seconds-this predator of Africa speeds up to 110 km this predator looks fragile, but it is not. Cheetahs have well developed muscles, the body is slightly elongated and slender. A distinctive feature of the Cheetah is that when walking and running the claws of the Cheetah are not to get involved. The length of this predator is about 1.5 m and weight 70 kg. Live these wild predators about 20 years. Hunts exclusively by day, at night on the hunt comes out.

The African leopard has a well-developed muscular frame, long body, slightly flattened laterally. Adult male with a height of 70 cm, weighing about 60 kg, the females weigh 20 kg less. Leopards by nature solitary, in packs, they do not stray. Unlike the Cheetah, the leopard is a night of wild carnivore, the day he tries not to go hunting. Runs fast, capable of speeds up to 60 km, Its territory is necessarily aiming. With other leopards negotiations are conducted with the help of a growl and a roar. On the hunt, moving almost silently, footsteps light and barely audible. 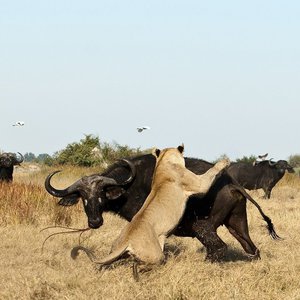 Crocodilesthat live in Africa are considered to be one of the largest wild reptiles. This is a huge predators living both in water and on land. Length of the adult reaches about 5 meters, weight is often more than 500-700 kg. Feed mainly on invertebrates, larger individuals prey on cloven-hoofed animals come to drink. Crocodiles kept in isolation, they are by nature loners. In large flocks gather only during the mating period.

The tsetse fly is considered one of the most dangerous insects on Earth. The bite of this species can cause a disease called trypanosomiasis. Feeds only on blood, leads an active daily lifestyle. The adult is rather large, it can reach up to 1.5 cm.

People called African honey bee bee-killer. These individuals attack anyone who dares to approach the hive. People suffer the stings of the bees. On view is the usual bee, a little larger than usual. This kind of character is very aggressive, and patient. If the abuser tries to hide in the water, a swarm of bees will wait at the first opportunity and always attack.

Army ants are different from the usual that of the colonies they build, and lead a nomadic lifestyle, moving from area to area. Insects “step” system, which can stretch up to 15 m. the Bite of an ant is very dangerous for human and animal cause allergies that can lead to death by suffocation.

Kissing bug is deadly. Its bite is able to cause Chagas disease. Hunts in the dark, reacts to the warm breath of the person. The bite in the dream, the person may not feel. After a while the bite swells up and itches. Subsequently enters the blood, the blood is carried to the heart and intestines.

For tourists who choose to visit Africa, it is imperative to explore the continent. Clear guidance is no protection, experts suggest the first thing to do all the vaccinations. Many cases where overly curious tourists went for a walk on the Savannah alone. It should not be done. Accompanied by specially trained persons, in closed cars it will be possible to admire the wild nature of Africa.

Predators, habitat which is the wild nature, extremely dangerous. People for them in the first place — a source of danger, and the danger must be eliminated.