Yaki is a large even-toed ungulate mammals with short legs. Animals are able to carry heavy loads. Yaks are known for their extraordinary strength and endurance. There are representatives with signs of several types. Longhaired mountain dogs are like ordinary bulls combine features goats, bison and sheep. Wild Yak are not suited to live in areas inhabited by people.

Domesticated yaks are used to aid in heavy peasant labor. Talking about this ancient miniatures of the animal. In Tibet praise the Yak. There is even issued postage stamps with his image. Wild Yak in the annals identified as a great evil for man. He is dangerous and becomes terrible when attacking. The hunt for the bull was attractive to soldiers of the Eastern troops. The generals were decorated with heads of tails of yaks.

Description of the appearance of the Yak 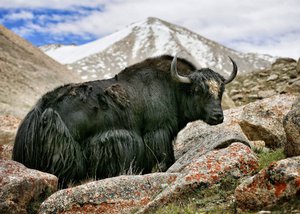 Mammal, the Yak has a long, large body, short legs. The front part of the body is more developed at the withers there is a raised hump. Short legs over a round hooves. On the head has long horns growing to the sides, and they bent upwards. Depending on the maximum length of the horns is 95, see Also muzzle, the whole body covered with long hair that hangs to the ground. Hair forms a hem. On the face there are white marks. In winter the normal functioning of the body provides a thick undercoat. The main habitat — Tibet and other parts of Asia.

The use of the Yak

During molting the animal’s hair falls out in clumps. In color it is grayish black or dark brown. Domesticated yaks are grown as draft animals, for milk and meat. The Tibetans made from the wool of yaks harnesses and other items. Wool does not absorb water and does not cause allergies, it is very wearable. For making items the wool is carefully combed. 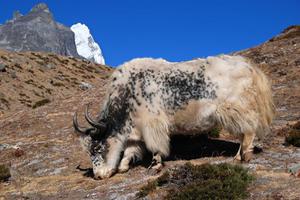 Males are twice larger than females and weigh from 0.95 to 1 ton. The female carries the fetus for 9 months. The cubs are near the mother. Puberty occurs at 6-8 years. Yak live on average 25-30 years. Aggressive, especially during mating season, which falls in September-October. At this time, they join the herd of cows. Between males there were bad fights.

The Yak uses the horns to penetrate the opponent’s side, and this is different from other bovids animals. During the attack, the male holds his head high and develops like a horse’s tail. Not able to roar and hum, but only makes grunting when he’s angry. This applies to domestic breeds and wild yaks – silent. During pregnancy , the male leaves the pregnant female. Domesticated animals are well trained, meet in circuses.

Adult specimens reaches 4.25 m in length and 2 metres in height. He has a good sense of smell, unlike hearing and sight. Very hardy. Came across one individual with three bullets in the head and fifteen in the chest. Even in this form, the Yak remained very resilient. The animal belongs to a dangerous species of mammals, especially when wounded. Not tolerate the proximity of man. Yaki can come in herds, but with age are separated from relatives and are alone.

Other characteristics of the Yak:

In Tibet yaks bulls live about 10,000 years. At the height of 4000 km, they rise in winter and summer at 6,000 km. Wild yaks nowadays predominate in high areas, away from people. This movement choose animals from extinction. Home individuals stay close to their relatives. The bull can be found in the Tibetan plateau, the Karakoram, Ladakh.

In Tibet praise the Yak — where you can buy Souvenirs-figurines. Tibetan yaks live in herds of 10-12 cows. If the herd is in danger, the kids are driving in a circle for protection and defense. In the works of N. M. Przewalski found descriptions of a herd of several thousand animals. In the 19th century, he first made a description of the animal, but it was difficult to get information difficult because of inaccessible habitats.