Badger is a widespread mammal of the genus Mustelidae. There are several subspecies of these animals. The largest – usually or European badger.

As the habitat of the badger is almost all of Europe, except in the coldest areas, and the Caucasus, Transcaucasia, the Crimea and part of Asia. The beast prefers forest lane, forest, mountains. The area overlaps with the territory of residence of the Asian badger, which leads to their crosses. 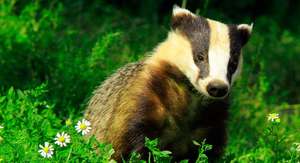 Looks like a badger? It is difficult to confuse with any other animal. The exterior has a few features. The body is the European representative of the species can reach 90 cm in length and 30 cm at the withers. Traditionally, females slightly less than males. The trunk is massive with a short, wide stable legs with long strong claws and a small wedge-shaped head. Weight is about 20 pounds. However, this depends on the time of year. Closer to winter the beast puts fat before hibernation. It layer can be 4-5 cm thick, the weight increases to 1.5 times. For the fat badger because of the healing properties are often hunted by the people. The tail of the animal is rather short up to 25 cm, but fluffy. In the photo the animal before hibernation.

The first thing that catches the eye on a photo of a badger, is the color of his head.

The European badger face with small round ears, has a distinctive coloration with 2 wide dark stripes on light gray background distinguishes it from other subspecies: 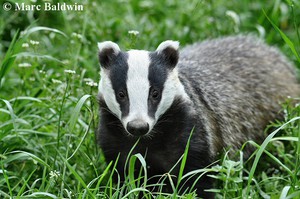 The back is colored grayish-beige tones, often with a noble silver patina. The abdomen is much darker, almost black. Summer outfit of the beast is somewhat different from the winter, it is shorter, has a beige undertone. Wool is tough, it protects the animal not only from bad weather and attacks of larger predators, but also from man. The fur of the badger is of little value.

Cubs are born blind and do not have that characteristic fur as the adults. Out of the hole they begin to emerge only after 3 months. How to look young, you can see in the photo.

What eats badgers? The diet of the animal is very extensive and varied.

Treat are insects, larvae, worms. The animal is able to swim and uses this skill to catch fish and frogs.

The specific menu depends on the habitat and season. Although the badger is considered a predator, if the terrain is rich in fruits, the beast may satisfy the appetite and not wasting time on the hunt for more mobile food.

Each badger has its own territory. After sunset he gets out of an underground hole, slowly passes the station, to inspect trees, stumps, grass, picking up all edible. The animal walks through the woods quite noisy due to the structure of the clutches. Beast comes to the entire foot. The traces can be sure that they resemble the paw print of a bear.

Use badger that he can eat some agricultural pests. But the farmers harvest the beast away to feed, especially legumes and corn.

Before hibernation, the animal makes the reserves in order not to remain hungry in the spring after waking up. Even with the shortage of food, the badger doesn’t touch fell and the remnants of the meal of other animals. 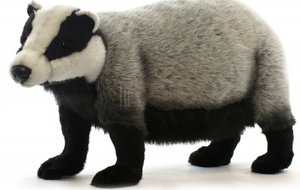 Where the badger lives? Home to the beast is an underground burrow. He chooses the place for its construction. Most often it is the slope of the ravine or beams. Important is the presence of a nearby pond and soil composition. The animal takes into account the risk of flooding of underground houses, focusing on the groundwater table. Clearly visible in the photo badger’s burrow.

Forest animals – foxes and raccoon dogs appreciate the underground home of badgers and would not mind to live there. 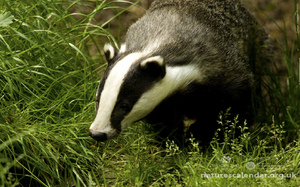 How does the animal in their natural habitat? Badger is the representative of the fauna of the night, out of the home until nightfall. In this regard, its key senses of smell and hearing. Vision developed a bit worse. Day the animal spends time under the ground. In the cold season goes into hibernation, but during the thaw can Wake up and go outside. Animals from warmer regions hibernation shorter.

Badgers conservative, long live in the same area. They are monogamous, creating only a few and often live in families consisting of several generations. Mom takes care of the kids, and up to 3 months feeding them milk. In nature there are loners who build their own separate hole, preferring to live away from relatives.

Badgers clean, constantly keep order in the hole and around it, take care of their fur. They do not like to rush and move very slowly, head bowed. The animal is not aggressive when meeting with predators and other dangers prefers a strategy of avoidance. In a critical situation will be able to fend for themselves.

Life expectancy is 12 yearsand in captivity up to 16. To meet a badger in a natural environment because of its lifestyle is seldom possible, but it is often the inhabitant of the zoo.