More repulsive in appearance, the mammal than the hyena, it is hard to imagine. Body and face – from mongrel dogs, ears – cat grin – the lion. And powerful jaws, unlike any other jaw of the animal world! Joke – pressure on anything that gets on them is 70 kg/cm2. This means that in a matter of minutes, they are a good grinder that can grind bones in a meat of almost any animal. 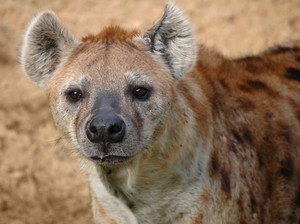 The hyena a cat or a dog?

Of course, these unattractive features of an animal born on the rumors and legends. For example, some African tribes believed that hyenas are evil spirits who come by night to the grave and furiously ruin them. The inhabitants of savannas and deserts led them on a furious hunt, preferring to see these frightening scavengers in dead than in live. And then buried the bodies so deep in the sand to the evil hyenas in any case it doesn’t come out.

For a long time these animals are considered polykote and prosobee, not yet determined and has not attributed them to the Carnivora family of hyenas. 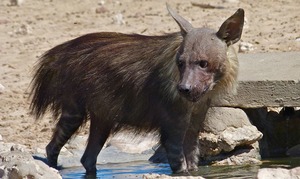 Currently known only four species of hyenas. The lightest weight is considered to be an earthen wolf. Its mass, as a rule, does not exceed 10 kilograms. The largest predator is the spotted hyena, individuals which reach 85 pounds. Between them is a weighted category that includes brown hyena and striped hyena.

All the predators have approximately the same habits, but different in coloration, habitat, and food preferences. The table below shows the features of each types in order of increasing weight and power of individuals. 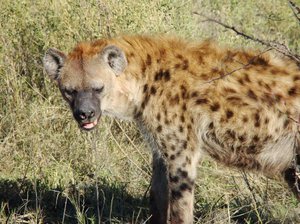 The table shows that the spotted hyena is the largest member of the family. The powerful jaws of the beast snack in one sitting the bones of antelope, Buffalo, Zebra. Hunting in packs on the animals of the Savannah, they arrange a real slaughter, when on-the-fly with a speed of 60 km/ h into the side of the victim and begin to shred still alive. Saturate the meat with blood, insatiable Crookshanks will not refuse dessert in the form of turtles, fish, snakes, lizards. Adult healthy individual is able to eat up to 14 kg of feed. But she is drinking very little.

Clans with a clear hierarchy

In social terms , the spotted hyena is a very organized predator. No one else from her relatives there is no clear social ladder as these individuals. Hyenas live in clans in which everyone obeys the rules of matriarchy. Even the frail female its significance is superior to any male. A clan can include up to 80 individuals. The most blatant and strongest female becomes the leader of the clan, and the attempted coup in their possession dealt harshly with rival. With males of conflicts in the group almost does not occur.

The main task of the clan, along with hunting, is the protection of the territory. The main rivals of hyenas competing with them on the same food, are lions. So often there are conflicts between the big cats and noble small scrappy scavengers. If hyenas are attacking in large groups, they are able to knock down the lion.

Philosophers on the hyenas

Horror, and more! However from all the above applies only to the voices of hyenas. Indeed, sometimes pathetic drawl, sometimes squeaky and annoying, but more often comparable with wild laughter, he recalls the hues of human emotions. These sneers at banquets with martichenko running up the lazy lions from the surrounding Savannah, with minimal labor cost to seize the prey. When the lion roars, hyena is silent.

The structure of the genital organs in females

Actually hyenas are hermaphrodites? Of course not. Like all mammals, they reproduce by mating with individuals of the opposite sex. In nature the male easily distinguishes the female from his brother. But the man is not always able to correctly determine the sex of the animal. There were even cases, when waiting for pairing, in a cage in the zoo have placed two females, including their opposite-sex individuals, and then wonder why they are instead of Congress staged fights.

The reason for the confusion of the sexes lies in the structure of the genital organs of the female. In connection with a high content of the male hormone testosterone in her blood, in the process of evolution has changed the appearance of the clitoris. It is a very long and often reaches 15-17 see Due to the elongated shape and large size of the clitoris is mistaken for a male genital organ. The illusion the mixing of the sexes reinforce tightly meshed the small lips of females, looks like a scrotum.

How not to appear terrible tales about animal is a hermaphrodite!

The mating season and offspring 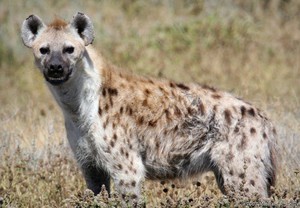 The female is located, mating throughout the year, but the male is more passive. The stormy season is celebrated from may to August. In the period of the surge of hormones of a young male trying to get females their beastly ways, while remaining timid and cautious. Because spotted hyenas in a clan dominated by the lady, and she can pretty Pat suitor, if it is something not like his behavior.

The gestation period lasts 100 to 110 days. Hyena brings, as a rule, only two cubs. They are born with open eyes, with an average weight of about 1.5 kg. the Coat of the newborn is smooth and plain, without the characteristic spots that only appear after 3 months. At this age the female will begin to bring them meat, and to teach to hunt. But, nevertheless, still a year and cubs remain with the mother in the burrow. It will be about them carefully to care and protect your family from dads who will not fail to enjoy a tender meat kids, if suddenly the female gape.

The hyena, though it looks unattractive, and builds human faces with a grin, attacked him very rarely. Among many African tribes even fixed the attachment and loyalty of individuals to the two-legged master. The beast is easily tamed, responds to affection and takes out of the hands of food. And in Kenya, for example, even put on a show feeding these creatures and the participation of tourists. So, “strange gait and satanic laughter with pleasure” – only masking to the man, to show his malice and insanity.