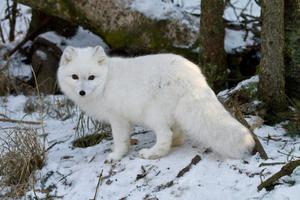 Animal Fox with its appearance very similar to a Fox, however, due to the short limbs, the animal differs stocky physique. Body length of the adult animal can reach 75 cm and height 30 cm . The average weight of an adult male is about 3.5 kg , sometimes weight comes to 9 kg . Weight of adult female reaches 3 kg . Tail – the main ornament of a polar Fox. Its length is 30 cm .

The main difference between a Fox from a Fox – a shortened muzzle and short rounded ears that are easy to notice in summer. As for the winter period, this time of year, the ears are barely visible under a thick layer of fur that protects them from frostbite.

The fur of the Arctic Fox is dense and layered all over the body despite the compact body type. It provides reliable protection to the animal during the harsh Arctic frost, when the temperature can drop to -60 degrees. Even paw paws are covered with stiff hairs warm. Traces of Arctic Fox trace Fox, but due to the fact that the pads are covered with fur in the winter the footprints of the pads are weak.

The animal’s eyes are different great pigmentation, which is a good protection of the retina from the burns, which are very simple to get reflected from the snow cover the sun’s rays. The Arctic foxes are often found heterochromia – different-colored eyes.

The Arctic foxes are very well developed hearing and smell, but sight is their weakness. The voice of the animal is similar to the yapping bark, which can go to the growl if an animal feels danger approaching.

The color of the fur of the Arctic Fox 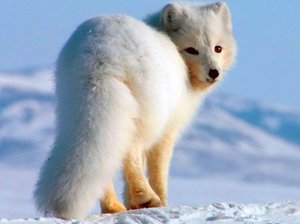 Depending on your color, Fox can be blue or white. Scientists say that the blue Fox is considered to be the dominant form. From the blue Fox in the days of the ice age and there was his white counterpart. White Fox is the only representative of its genus, which has a marked seasonal dimorphism in color.

The animals fur is thick, soft and fluffy to the touch. White Arctic Fox in winter has a snow-white color, and in summer the fur becomes dirty-brown hue.

Winter fur with a rich range of shades:

The main feature is that no matter what color or was the fur, it will always be called the blue Fox.

The period of shedding of these polar animals depends on the underlying range of their habitat, climatic conditions, state of health, age and thickness of the fat layer. The spring molt in most species starts in March or April and lasts for 4 months.

The autumn molt in animals begins in September and ends in December. It flows slower than spring. The best quality fur from the animals considered in January-February.

Due to seasonal changes of colouring of the animals are divided into the following classifications:

With regard to summer coloring adults, it is very similar to the color of krestovnika, the juveniles are smaller and their fur is not as coarse as in adult animals.

Habitat and subspecies of foxes

But where is the Fox? These animals typically live in tundra and forest-tundra zone of Europe, America and Asia, including most of the Islands, which are located in the seas North of the Arctic circle.

Foxes that live on the Islands, wearing a blue “coat” the continents are extremely rare.

During migration in search of food animals can roam the ice floes floating a few hundred kilometers from the mainland into the depths of the Arctic to the North pole. And Arctic foxes, on the contrary, can travel long distances, getting to the taiga, which is rich in food, but is more danger from natural enemies.

Depending on the area, currently there are 10 subspecies of Fox, who between them have minor differences, due to the constant mixing of populations.

The main ones are 3 subspecies:

Features of the habitat

As mentioned earlier, animals are typical nomads. Most of the year these animals spend in the path in search of food. Only during the breeding season Arctic Fox travel back to the places where they migrated in winter or autumn. Lack of food is the sole cause of this way of life.

Animals mostly live in the tundra. Animals love open landscapes with hills, where it is convenient to dig burrows in the form of intricate systems of tunnels with a large number of inputs.

Typically, the burrows are always located at a distance of 500 m from the water. In the tundra there are not many places that are perfect for everything dry and secure dens so the foxes use their home for many years.

11 Comments on “Blue and white Fox where they live”