Everyone probably heard the name lemming, but few let me say what is this animal and where it lives. We can say that the lemming is a wild hamster, it belongs to the family of rodents. In nature there are up to 20 different species, but their differences are not so significant. The adult size of 10-15 cm, it easily fits in the palm. 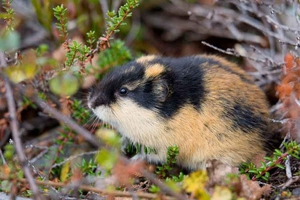 This little pussy has hair red — brown, often spotted, even lumpy. Usually the color of different types is slightly different, it depends on where there is a lemming, because its color serves as a camouflage from predators. In winter some animals can change fur colour to a lighter, which makes them less noticeable against the white snow. The change of coat from winter to summer and back again occurs during seasonal shedding.

And yet, where there is a lemming. Lemming is found mainly in the tundra and forest tundra. There are a lot of food. Lemming — herbivore, feeds on moss, grass, roots of shrubs and sedges. These rodents eat almost the entire small vegetation that gets in the way, thus can eat away a vast territory of the surrounding vegetation. These lemmings are causing significant damage to nature. They eat constantly, day they can eat twice more than it weighs itself animal. During the breaks, if the lemming doesn’t eat, it stores food. 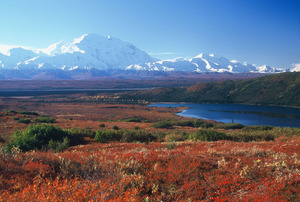 Where are the lemmings, you ask. It’s interesting, but in the summer the animals are more nomadic lifestyle. For wintering rodents make themselves at home-the nest of the same food under the snow. Some species of rodents in the summer dig burrows among roots of shrubs. For example, the Norwegian lemming digs a small length of tunnels at the foot of the hills that end in a round hole. The bottom of the mink is covered with moss or dry grass.

In General, this animal is a loner, but in winter can be combined, forming a whole building-settlement. In the summer in most homes you will meet a female lemming. Here she displays her offspring, and the male spends time in search of food. In hibernation they do not fall, breed year round, which population may be very large.

Lemmings are a major food source for such predatorslike Martens, weasels, foxes and wolves. The predators help regulate the population size of lemmings. For most birds of prey, rodents are easy prey, especially in winter.

The duration of life of the animal is an average of two years. The female throughout its life can produce 10-12 offspring. In one litter is born an average of 5-6 pups.

The science identifies 4 genera of lemmings. Each genus several species. In Russia, several species. They inhabit Siberia, the Arctic and the whole territory from the Far East and Chukotka to the Kola Peninsula. In Siberia lemmings can settle in the forests, where it grows moss — one of the main types of food of these fuzzies. They can also eat berries, seeds, cones, bark of shrubs and young trees. Some species can eat insects.

Names of species of this animal often occur from habitat individuals. Wood lemming is found mainly in various forests, their population is not large, unlike those that inhabit the steppes. This lemming eats grass, preferring different types of mosses. If the population of wild lemmings is greatly increased, they can migrate to the nearest city.

The types of lemmings

The most abundant species has the Siberian lemming. It has the most extensive territory, inhabiting the tundra of Eurasia, North and North-West of Russia, Islands of the Arctic ocean. In winter, the coat color change to a lighter one.

Populations of the Norwegian lemming are also few in number, inhabit some areas of Sweden, Northern Finland, Kola Peninsula. Here they can be found in peat bogs, mountain ranges and slopes. With increasing populations may migrate to the countryside. Their wool is not wet, it has natural water-repellent coating. As nor often use natural shelters and shelter than dig holes.

Amur species is quite rare. It can be found between the rivers Colm and Lena and in the South-East of the Kamchatka Peninsula. This species is smaller than the others, and the summer coat is similar to burunduchkov. Winter fur much longer summer and more silky to the touch.

Another species ungulate lemming. He got this name because the onset of cold weather they have on the front legs of the two claws greatly increase in size. This facilitates them digging tunnels in the snow and getting food. In General, the legs of this species of rodents are much more densely covered with long fur all year round. This is a consequence of adaptation to the cold Arctic climate. 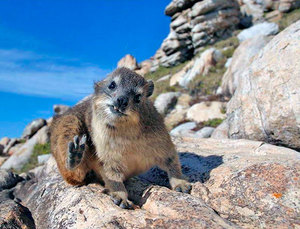 The largest species is the lemming Vinogradova, by the name of a Soviet biologist and naturalist. The adult size can reach 17 cm This species is under protection of the state nature reserve, Wrangel island, because it lives only here. They build a burrow-dwelling, venturing up to five feet, the area of such houses can reach up to 30 meters in area and have a lot of moves both inside and several exits to the outside.

Behavior in the nature

Observe the animal quite interesting. This very agile animal, it has almost always hovered between hummocks in search of food. Sometimes you can catch as they sit in their burrows, chirping loudly and rapidly waving arms. So they are trying to ward off potential enemies and to inform neighbors of possible danger. This is quite a pretty sight.

Every animal is absolutely independent and not depend on the place, except for females during breeding. But when the population of the species increases considerably, it may seem that they are moving in an organized pack.

Lemmings are carriers of certain types of infectious diseases dangerous to humans, do not eat unwashed fruits and vegetables collected in areas inhabited by these creatures.

Forced to live in captivity lemming is quite difficult, they need a certain climate and a very specific food. Despite his small stature and cute appearance, these rodents are quite aggressive and can easily attack.