The territory of the continent is almost all climatic zones, so the animals of North America is very diverse. Some of them are so rare that You may not know about their existence. Their rarity at times due to the hunting of poachers. So some animals in North America are already listed in the Red book.

The habitat of the animals of North America

Some animals in North America are on the verge of extinction. For this there were established national parks and reserves.

The fauna of North America 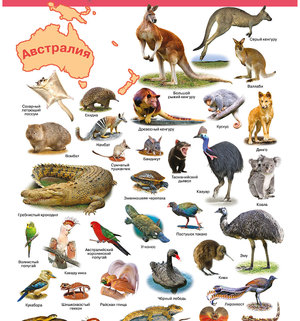 The American mink. This carnivore of the weasel family. The length of this animal is usually not more than 50 cm Ave. Eats rodents, insects, amphibians, fish. The American mink is a great swimmer and diver. Permanent housing, it does not. Usually she is looking for willing holes and lives in them. The number of such burrows can be up to 8. It usually settles along the lakes and rivers. Enemies of American mink are bobcats, foxes, bears, wild dogs, and otters. Mink has a stable population because of the huge habitat. But in some areas it is destroyed because of attacks on poultry farms.

Baribal. Another name for American black bear. They are most common on the American continent. Mostly black bears inhabit Canada. In the US they live in the North of the country and Alaska. Diet of American’s 85% plant foods. It feeds on fruits, berries and carrion. Also eats fish, honey and insects. Enemy for black bears is the grizzly bear.Despite the fact that they are being hunted, this species is distributed, and the population is increasing.

Polar bear. The largest North American predator of the tundra – polar bear. They live in snow and ice of the Arctic ocean. The polar bear is considered the most a close relative of the brown bear. The predators feed on walruses, fish, seals and sea hares. The beast in the food usually uses only fat and skin of the victim. Polar bears very little capacity to reproduce. The female can breed every three years. In this case, the light is born 1-3 cub. Today the polar bear is listed in the Red book. This contributed to the poachers and the pollution of animal habitats as the result of pumping oil.

Brown bear. This predator is one of the biggest land predators of North America. Brown bear is one of the most dangerous animal in the world. It lives in dense forests, and winters down in them. At first glance, the bear is rather clumsy, but in fact he is very agile, can jump high, swim and run fast, and climb trees. Brown bear can find a meal at any time of the year. He eats fruits, vegetables, berries, legumes, mushrooms, birds, rodents, insects. He also loves fish.

In the fall the animal is gaining weight and satisfied with den. In the winter he goes into hibernation. But in the case of poor nutrition in the summer, polar bears can search for food in winter. During this period, it is very dangerous, can attack by herbivores and even human. For centuries, people hunted brown bear. Its meat is very tasty, and the fat rich in vitamins. The skin of a predator is at a premium. But the bear does not attack people, he, on the contrary, tries to stay away from human settlements. 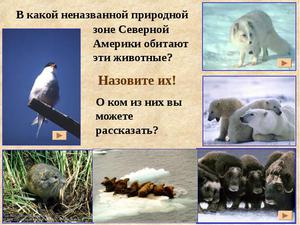 Wolf. Wolves live in packs, why is a certain area. Predators love open spaces, and forests are avoided. Wolves eat mostly domesticated and wild cloven-hoofed. So their habitats are usually near the farms. Their relatives, they warn about the dangers of different sounds, and especially howl.

Predators can take up to 1000 miles in pursuit of prey. They are well versed on the ground. The main enemy of the wolf is man. In some countries the wolf is protected. In Ukraine, Russia and Belarus wolves as the enemy and it hunted at any time of the year. In Europe, on the contrary, the wolf is listed in the International Red book and is protected.

Ermine. Ermine belong to the family Mustelidae. The habitat of the animal is the tundra, steppe and taiga. Usually the animal doesn’t like to get deep in the forest, he prefers to dwell near the pond. He likes the solitude, therefore, avoids open spaces. The weasel feeds on rodents, chipmunks, hamsters,and he regales the birds and their eggs, insects and lizards. The weasel is endangered. He is listed in the International Red book.

A grizzly bear. This animal is one of the most aggressive in the world. If he rises on his hind legs, his height will reach 3 metres. The bear eats plants, fish and small animals. In winter, the predator goes into hibernation for six months without food or water. Though the predators don’t eat people, but they still have to fear. The Grizzlies have poorly developed eyesight, so he can mix with any other prey. Grizzly bears in recent decades had small numbers, therefore, have created national parks and reserves. In some places they are so bred that they started to allow seasonal hunting. Today the grizzly bear is listed in the Red book.

Raccoon. This carnivorous animal belongs to the raccoon family. The name of the animal was due to his habits prior to use inside to wash their food. The raccoon inhabits mixed forests near water. It feeds on rodents, insects, bird eggs,fish and plant food. Preferably, the animal leads a night life and sleeps during the day. The raccoons pelt is very much appreciated. They consume also many farmers not only for damage to agriculture, but also due to the fact that raccoons are Prime carriers of the infection. But despite all this, the number of raccoons was not serious.

A canadian lynx. This predator has an excellent hearing and vision. She lives in Alaska, Canada and the States of Washington, Montana and Colorado. The usual rations for the canadian lynx is a hare. Enemies for the lynx is a brown bear, a wolf, an owl and a coyote. From bad weather predator hiding in the caves and on trees. The canadian lynx is endangered because of poaching and habitat destruction.

Puma. Belongs to the cat family. The animal usually hunts at night. In the diet he had any animals, including Pets. These animals were long exterminated, but now hunting of Cougars is strictly prohibited.

Wolverine. The Wolverine is the largest representative of the weasel. Look like a little bear. Wolverine is known for his tireless appetite. This is a very dangerous beast. Ordinarily the animal eats carrion, but sometimes attack other animals. It is a smart move on the ground, trees and floats well.

Skunk. A small animal is “famous” for its protective effect. Once the animal had scented danger, it produces two jets of fluid terribly unbearable smell. This protection can is also to blind the enemy. The skunk eats a variety of food. Their diet consists of plants, insects, birds, small rodents and small fish.

Red lynx. The animal is a formidable predator, the wool of which is covered with spots. Habitat is in the forest and mountains. The lynx is considered an excellent hunter. She has a very well developed sight, hearing, it is flexible and plastic.