Marsupials are animals that give birth to premature babies. After the birth of the cubs is still very tiny and can not exist independently, they have not yet fully formed limbs, the body is not wool. Therefore, after birth, they develop already inside the bag located on the body of the mother in the form of leather pockets. 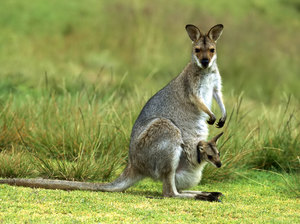 In this article we will look at the major ones

This animal is the most prominent representative of the family of marsupial animals. Know about them, even the children. Home to kangaroos in Australia and New Guinea. This herd animals and they live in small groups. They move by jumping with hind legs.

The length of gestation of a kangaroo is only thirty or forty days, after which are born tiny kangaroos that after birth immediately reach into my bag and finds the mother’s nipple. The first time a kangaroo out of the bag after two months.

Kangaroos eat grass. They can be completely without water.

Today there are fifty species of kangaroo. The highest jumping kangaroo is the red kangaroo. He can jump up to ten meters in length.

The fastest among the giant kangaroo is a kangaroo that can jump sixty-seven kilometers per hour.

The Koala bear is a marsupial bear, living in the trees. The Koala eats primarily eucalyptus leaves.

Pregnancy for koalas only lasts thirty-five days. Usually deliver only one calf, which sits in the pouch and feeds on milk for six months, then moved back to his mother. So on the back of the mother they live for another six months.

Due to the fact that eucalyptus leaves have a very low energy value, koalas are slow-moving way of life. They can sit still more than fifteen hours a day.

It is also the representative of the marsupial animals, is known for its ability to stick out his tongue at length, almost equal to the length of his body that helps him to get out of the most remote places of termites.

Interestingly, Nabatov no bags and after birth, the young attach to nipples just mother and are in such condition for several months. After 4 months the mother leaves their kids in a safe place and returned to them only for the night. A few months small mammals feed on termites already. Ambati listed in the Red book as an endangered species.

This little marsupial representative of the mammalian beasts. Multiply these animals, usually in winter. Pregnancy of marsupials Martens lasts only three weeks, and then 8 cubs are born the size of a rice grain. Due to the fact that the mother is only 6 teats, two calves killed. The rest hatched in the bag for two months, then move on to mother’s back and sit there for another month and a half.

This animal is a carnivorous marsupial that emit terrifying sounds at night. They feed on carrion and small animals.

Pregnancy lasts three weeks. Born twenty little babies, most of whom will die because the female has only four nipples. At the age of three months, the babies grow fur and open their eyes.

As these animals constantly attacked the livestock farm, they began to destroy. The Tasmanian devil is listed in the Red book and protected by law.

It is also a representative of the marsupials, which is even available in a separate view as very different from other marsupials. Still on the breeding of the marsupial moles is little known. The females before giving birth dig a big long hole. Brings the female no more than two young, as her bag has two pockets.

Marsupial mole remains a mystery to scientists, as it is quite difficult for him to observe in the wild.

This is the smallest marsupials among mammals. Honey badger feeds on pollen and nectar of plants. Lives on trees in nests, sometimes takes abandoned bird nests.

In one litter of possum the honey badger usually with four cubs. They grow in the bag eight weeks, after which it may already own to eat together with the mother.

These little animals move through the trees, clutching their long tail in the branches. Often you can see them dangling on the tail and holding only to them.

Possumy-honey is not protected by law, but their population is gradually decreasing, due to the fact that the reduced food supply of these animals.

This animal is a relative of the kangaroo. Wallabies are also hatching their young in the bag. There they are approximately eight months, after which it can live independently.

Increasingly become a Wallaby in the dark, and the day they prefer to sleep somewhere in the woods.

This is a cute Australian marsupial animal. Wombats mostly live underground in dug holes. Wombats eat mainly vegetation, the roots of the plants. In the daytime they usually hide in the hole, and after dark come out.

It is very interesting that bag the wombat turned back, that is the entrance to the pocket is located in the abdomen. This allows them to dig burrows even when the bag is calf.