Our planet is home to hundreds of unique creatures. Including a small hippopotamus, which was discovered in 1911 during an expedition of the German zoologist G. by schomburgk in West Africa. In natural habitat these crumbs are ongoing civil war, massively destroyed forests and a thriving poaching. But rather a lack of physical security allows local people to organize full protection of the animals, causing their numbers significantly reduced. In the language of the tribes living near the pygmy hippopotamus is called MBE-MBE or nigbo. 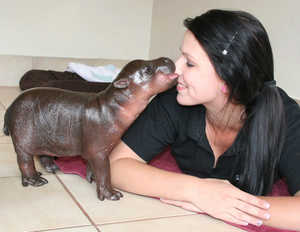 If in the recent past, the term “pet” means the world-famous cats, dogs, parrots or fish, at the present time the situation is completely different. Today people are more original and often thinking about purchasing a completely different animal. One of the most extraordinary, but the solution is to purchase a pygmy Hippo. After purchasing this tiny creation you make in your home with new bright colors and unforgettable emotions. Also a new pet can cause the interest of all guests that will come to your home. But before you make a purchase, it is important to define all peculiarities of this animal.

The story of the dwarf hippos

The first mention of mini Pets appeared relatively recently. Some sources claim that in 1843, visited Liberia, the American anthropologist Samuel George Morton and led an expedition during which one of the natives presented him a unique animal. The researcher was surprised by the size of the gift, because they were ten times less than an ordinary hippopotamus. 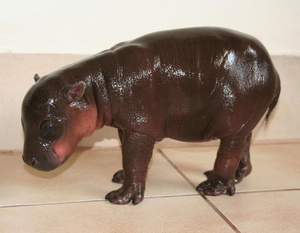 Out of curiosity scientists began to carefully study these mysterious creatures, and registered a new. But only after a decade of unique creatures interested anatomist of Pennsylvania Joseph leidy described a pygmy Hippo in his scientific work.

European countries learned about the existence of tiny copies of the Hippo only in 1911 after the expeditions of Hans by schomburgk in West Africa. Scientists brought to Germany from five individuals who is well settled in Hamburg zoos and have produced healthy offspring. Many zoos around the world have been willing to pay a lot of money for the purchase of such an amazing creation. 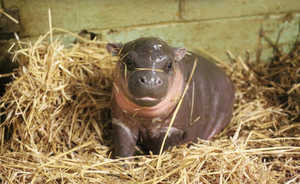 The natural habitat of pygmy hippos is considered to be Liberia, Sierra Leone, Guinea and the Congo. The animals like to live near water bodies with slow current and an abundance of tropical plants along the shoreline.

Small copies of the lead a slightly different lifestyle than their older counterparts. First give preference to a single way of life and rarely form pairs. The latter cannot imagine their existence alone.

Almost all the free time pygmy hippos are on land but not go further than few hundred meters from the water. Because of the characteristics of the skin, small animals need regular bathing to prevent drying and damage to the skin and numerous other health problems. If the street is very hot, the young one is almost never out of water or makeshift shelters on the shore. At an early age, animals are taught to swim and dive, staying underwater more than three minutes.

Eating these crumbs are searching for at night as in the day-time heat they rest. In their diet are vegetable multiple products that can be extracted both on land and in water. The procedure of finding food is very interesting, because the little creatures are forging their own routes to the food base, which may be used by only them. Strangers into their territory without a fight is not allowed. ¼ Day animals spend on their favorite food intake.

The external features of the pygmy Hippo

If you look at the appearance of this comely creatures, then it is safe to say that the size of the crumbs ten times smaller than the usual, well-known Hippo. But in addition to size, the animal has and their external differences, due to what it referred to quite another view.

The main differences are in:

In the wild number little hippos is significantly reduced. The fact that they are a beloved food of many predators and poachers who can sell the pet on the black market for huge amounts of money.

How to keep a pygmy Hippo at home

The contents of this little pet at home does not require much effort, because it does not show capriciousness in the plan of care.

Still, some rules and peculiarities should be considered.

Where to buy a pygmy Hippo. How much is pet? 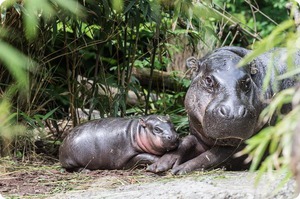 Given the fact that the dwarf hippopotamuses were used as Pets is relatively recent, find and buy such a creature in a normal pet shop will be very difficult. On the territory of the Russian Federation there are nurseries who breed these tiny creatures, so you’ll have to look for interesting offers abroad.

Before buying it is important to check all the documents and certificates for the maintenance of the exotic in your home. If unlicensed pet across the border, problems can occur.

The cost of a small Hippo starts at 1,000 us dollars, this is not the limit.

Before you make a purchase, be sure to mention all the “pros” and “cons” and make sure you are ready for this update.