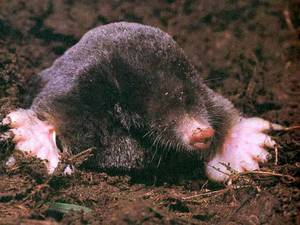 The common European mole, and is most often found in forests, meadows and fields. Where moles live, darkness prevails, so moles have no eyes. Some representatives sometimes meet eyes, they are small and almost undeveloped, with the help of the mole can only distinguish night from day.

The mole is almost all the time is underground, on the surface it is selected in the process of digging kratovil. Underground mole vision not need, he sharpened the other senses – smell, touch and sensitive ears. Hearing the inner mole.

So, it looks like a mole? This is quite a small size specimen, the length of which does not exceed 20 cm from the Muzzle of a mole with no eyes, covered with hairs, with which the mole perceives the surrounding world. The animal’s nose resembles a trunk. With the help of the mole produces his own food. Animal covered in black fur, to the touch the coat silky and soft. Most often this animal is found black in color, but representatives of this species are ashy and brown. Fur grows exclusively up, no directions of growth was observed, i.e. the hair does not lie neither right nor left, neither up nor down.

The mole paws resemble hands. They have fingers, only 5. The fingers are long thick claws that help the animal to dig and build tunnels. The neck of the animal you may not notice on first inspection.

Usually representatives of this species molt 2-3 times a year. Best on the touch and appearance, the wool becomes after the autumn moult, before the winter, it grows thicker and longer to protect the animal from hypothermia in the winter.

In my life the representatives of this breed grows up to 44 teeth.

Despite the average growth, the weight of the animal is extremely small. Moles only weigh 180-200 gr. Males slightly larger than females. 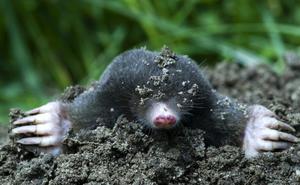 In winter time the underground inhabitants don’t go to bed, sleep for them is not typical. They sleep during the day for 2-3 hours and go to bed a couple of times a day. With other people in the world coexistdivide the territory. Able to eat carrion, eat the dead tribesmen. Underground enemies have little. The danger to the mole present ground predators such as foxes, Martens. Underground resident for these animals – the last in the food chain, because the mole exudes unpleasant for all the other animals smell.

To the question “where does a mole?” is a definite answer. Man with his own hands creates favorable conditions for the existence of moles. Farmers are processed annually millions of hectares of land than representative of this kind enjoys. He “moved” the already plowed land. This greatly facilitates the vital functions of animals, because on the fields the soil is loose, because a special effort in digging tunnels and crotalin not required.

Typically, the mole goes underground at 6-7 cm, but sometimes the tunnel depth can reach 50 cm Often underground individuals build homes on the banks of the reservoirs. They are excellent swimmers and love water. To life on land, they are not suitable with the kind of clutches is almost impossible to walk. Crawl mole can not for reasons of personal security to avoid becoming easy prey for the predator.

Underground burrowing animals dig complex tunnels, they can be divided into: 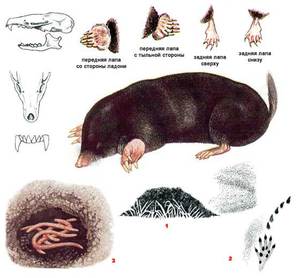 The representative of this species is extremely voracious. A day he eats food weighing with himself (100-120 g). Farmers and gardeners mistakenly believethat a mole in the ground feeds on roots. It happens that the animal is a mole digging tunnel gnaws encountered in the root and the plant dies.

Their diet consists of:

The underground inhabitants are trying to eat exclusively invertebrate food. In the winter they eat what was stocked for the entire warm period of the year. Sooner or later, a certain parcel of land food ends, so subterranean dweller moved to a new place of residence. 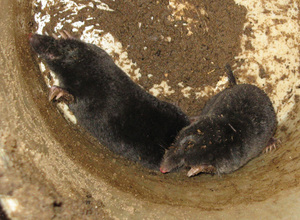 Underground diggers reproduce the same as most other mammals. The process involves two individuals, male and female.

Before breeding, the pair is building a nest. The bottom is carpeted with dried-up young grass or soft moss. The nest warmed fallen leaves. Equip them deep enough, about one and a half meters. Animals dig nests under the roots of trees or under dense shrubbery that serves as an additional protective factor.

Pregnancy lasts approximately 40 days, the brood can be from 3 to 10 krott. The young of the mole are born bald, but rapidly growing, fast grow hair and gain weight. After a few weeks crotta begin to live apart, leave the nest and fend for their living. Upon reaching 2 months of age the youngsters begin to dig their own wormhole.

Harm and benefits from moles

The farmers are aware that their possessions wound up uninvited lodger. On earth there are a small earthen mound. This is the exit of the animal to the surface and vent at the same time. The tunnels are interconnected, what is done also in order to to the underground shelter was enough oxygen-rich air.

Sometimes underground miners cause significant damage to the crop, damaging the roots and keep moisture in plants. Too loose, these animals dig the ground, the plant loses its support, the roots do not receive sufficient amounts of moisture.

As for use, the underground burrowing animals feed primarily on insects, so they can save the crop from excessive attacks of wood lice, worms and other pests.

In the modern fashion industry began to appear the coats of the sleepers. They are very expensive, but the quality are excellent. It is believed that in this coat it is impossible to freeze. Coat with the mole began to sew and other fur products.