In the forest is home to many different animals. Predators, mammals, birds, reptiles — is not a complete list of the forest dwellers. Forest beauty, the rare beauty of wearing a coat the color of buckwheat honey, is called marten. Still it is called jelously. 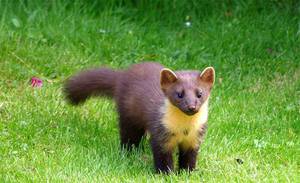 This animal belongs to the family Mustelidae and the genus of Martens, nimble, graceful creature. In the process of hunting the marten easily climbs trees, overcomes great distances and are able to hunt for a long time.

So, it looks like marten? Forest dweller belongs to the predators, the growth of which does not exceed 50 cm Short muzzle with a broad forehead, his head crowned by large ears with rounded top. Nose black, eyes in the night cast a reddish tinge.

The body is elongated, slender and flexible. The limbs are small and short legs end in claws. In winter, the sole animal acquires hair that allows the animal to not sink in the snowdrifts. With this figure the marten easily overcomes obstacles such as branches, instantly react to the appearance of the production. Obesity this animal is not affected, as it is constantly in motion.

On the neck of the animal hallmark is considered to be a bright spot in the neck. Pine marten are considered a valuable fur-bearing animal, its fur is highly valued in the manufacture and sewing of fur coats and other fur products, so the marten is protected by law.

Weigh the pine marten are relatively few — adult individual does not exceed 2 kg. Females reach 1.5 kg, males are heavier and taller. Despite the small size and weight, this animal has a powerful jaw with sharp teeth. Marten is able to cut the bones of his victim. 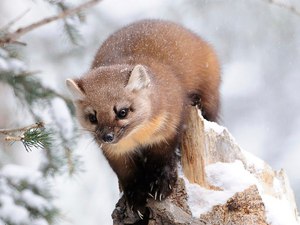 Specimen of this breed lives mainly in coniferous and beech forests. In the regions of woodlands, mixed forests, animal the most common. Marten can survive even in the highlands, altitude is about 1800 meters above sea level.

A favorite place of residence of the members of this species considered to be forest areas, untouched by man. Fallen trees and hollows in old trees help the pine marten hide from danger, to find a warm place for the winter and just take a break.

Animals do not live in one place. They adhere to the nomadic way of life to a day of rest, the animal finds a suitable hole up and sleep until nightfall. Animal hunts mostly at night, by day it is virtually impossible to meet.

Representatives of this species live alone. For each individual tacitly fixed area of land which animals are carefully labeled. The territory of females is somewhat less site males sometimes boundaries can be crossed.

In the wild this species of predators found a lot of enemies.

They decided to include:

In the diet of representatives of this species are small warm-blooded animals and insects, such as:

An important place in the diet of a charming predator is a protein food. A natural source of protein are insects. Dragonflies, various beetles Supplement the meat diet of the predator.

In the cold season, when each day eating is getting harder, marten could get as close as possible to the dwelling of man. Victims of predatory animal in this case become chickens and pigeons. 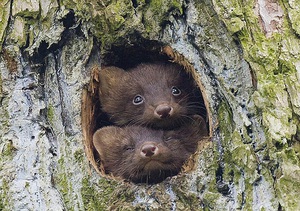 Mating in this species occur during the summer, a warm time of the year. In this period of time the females observed in heat, it lasts 2-4 days. All females males not enough, so male mates with several females in turn.

In winter, males are typical about marriage periods: at this time, aggressive males pestering females, but the mating doesn’t happen.

Pregnancy is very long and lasts about 274 days. In fact, the baby in the womb develops only 30-40 days, the rest of the time is latent stage.

Before birth the female begins to carefully prepare for the appearance of progeny. Select a place for the arrangement of the nest, the Nest is ready, the female remains there until the birth. Cubs are born in the month of April, the weight does not exceed 40 g, length 11 cm Newborn babies at birth are blind and deaf, slotted ears 23 on the bottom of life, to see they start on the 28th day of life.

Mother does not abandon the children, leaving the nest only for the duration of the hunt. If the young are threatened, the mother takes little or Martens in the other place, or eats the entire brood.

The first six weeks of life, calves eat only mother’s milk, they are rapidly gaining weight. After a month and a half grown cubs go hunting with their mother, actively exploring the territory near the nest.

Until the fall of the children live with the mother, then one begins an independent life. There were times that the cubs stay with their mother until spring. At the age of 2 years, the representatives of the weasel family fully Mature. Conception usually occurs in the third year of life.

The marten and the man 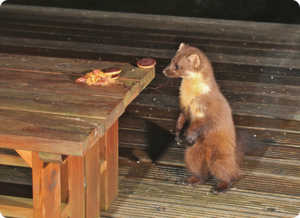 The fur of this animal is extremely valuable, people around the law and destroy representatives of this species for profit. The decline in the population of jellouse also contributes to deforestation, in which the animal is comfortable dwelling in a natural environment.

Some people for the sake of experiment tried to contain marten in the home. The opinions were divided. Seledochka at home he behaved differently. In some cases, she quickly got used to people after a short time the animal domains to human and calmly accepted the pats and hugs. Some individuals did not Express to the person any interest, behave as if surrounded by jelousy at all. The third group of jellouse behaved very aggressive, and the owners had to release the animal in its natural habitat.

Members of the genus Mustelidae live about 14 years. There are cases when some individuals lived to 18 years.

One Comment on “Pine marten the area of its habitat”