The snorkeling tour in Similan Islands was a short stop on the island Ko Miang, when we were dropped off on one side of the island, and we had to walk through the jungle to the houses, toilets and a beach on the other side. On the court, is quite civilized, but sheltered by a canopy of huge trees stopped to rest. And suddenly the lace of the foliage, I noticed a flashed fairly large silhouette. Something in him alarmed, he flew, but did not look like a bird. Carefully looked after: all the upper branches of the trees were just covered with huge bats. Actually, it is, of course, not bats, although belong to the order Chiroptera. It is small (or the island) flying foxes, Pteropus hypomelanus. They are quite large, and, unlike bats, do not eat insects and fruit and live in colonies on large trees, and do not possess echolocation. 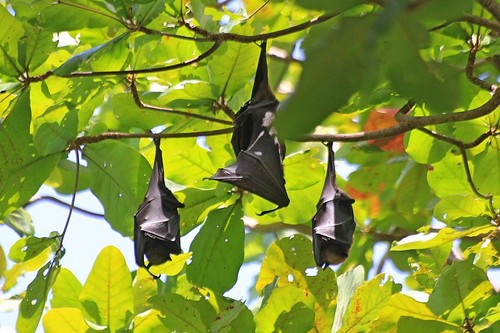 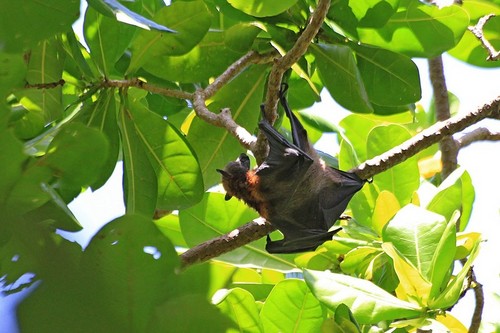 The habitat covers an area of up to 900 meters above sea level, but mostly in the range of not higher than 100 metres above sea level. Living members of the species in the forests, deciduous groves, orchards, preferring small and medium-sized Islands. 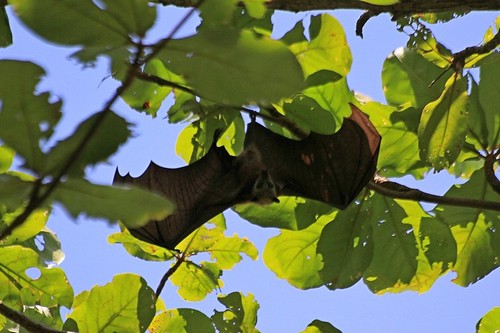 Also these cute animals called bats, flying dogs, kalorama. Why are these animals called flying foxes? If they look closer, the similarities are obvious — just look at their cute little muzzle that resembles a Fox. 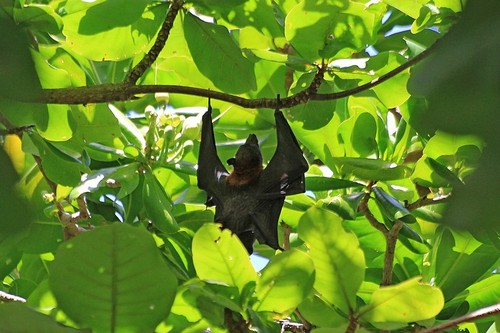 From small flying foxes body length ranges from 18.3 to 24 inches, wingspan is equal to 1.21 m. Males are larger than females. Their weight is 570-580 g, and females weigh 470-475 g. the hair on the head is dark brown, may be yellowish-brown and visibly pales in the Eastern part of the range. On the back is dominated by yellowish-brown or reddish-brown color. Belly cream or white. The ears are partially covered with fur, and membranes of the wings are black. Lower leg limb hair is not covered. On the back of the head and the wool is thick and short. On the lower parts of the body longer. 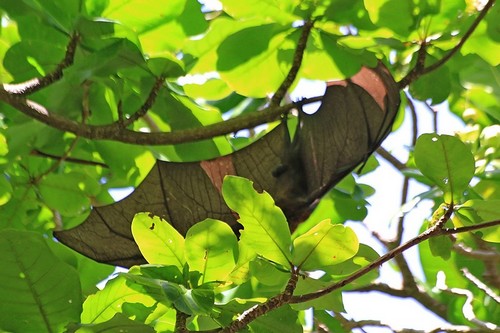 Though these flying animals called foxes and dogs, but actually this is not predators. They eat a variety of fruits, which in sufficient quantities in the tropics. Because of this locals often call them “fruit mouse.” 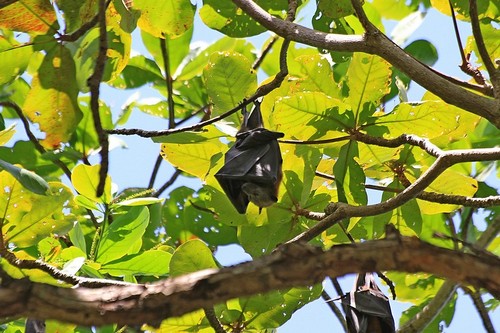 Dusk to leave their homes and using a highly developed sense of smell and eyesight are searching for their food, ultrasonic location is not in use. They especially like to eat bananas, papaya, coconuts, grapes, avocado. These “dogs” a whole bunch of sit on a tree and begins to eat its ripe fruit. Often they do not eat them, just suck out the juice with a small amount of pulp. The rest spit out. Per day members of the species eat the amount of food that is half the weight of their body. Sometimes the flying dogs attack on a plantation, than inflict serious damage to farmers. 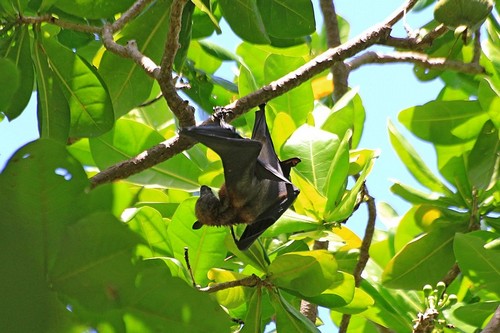 These animals are active at night. Flying at an altitude of about 30 meters above the ground. Don’t like to go far from permanent vacation spots. The maximum distance is not more than 8 km. 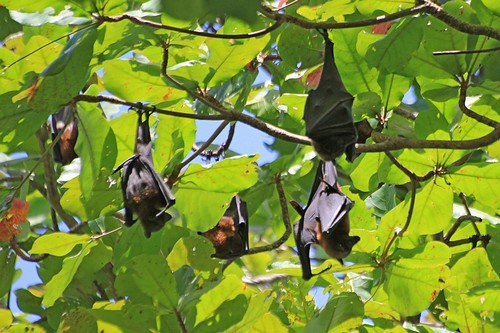 Rest in groups of 10 to several hundred individuals. Form a permanent colony, which are divided into family groups. In one colony there are typically 40 to 70 individuals. 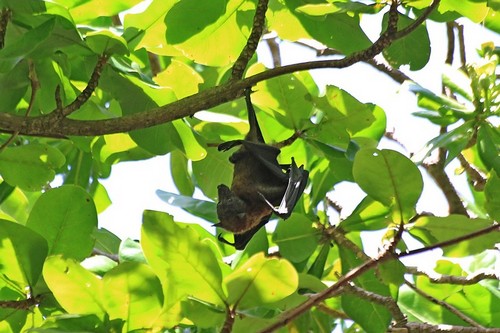 Days satisfied on the trees, which can use for several years. These colonies are usually located in mangroves, where the animals can relax, hanging on the branches. But during sleep they occasionally shout, “fighting” with each other. More adult males require everyone else to make room. You can see how dogs hang only on one leg, and the other wing wrapped itself like a blanket. And in the heat use them as a fan! 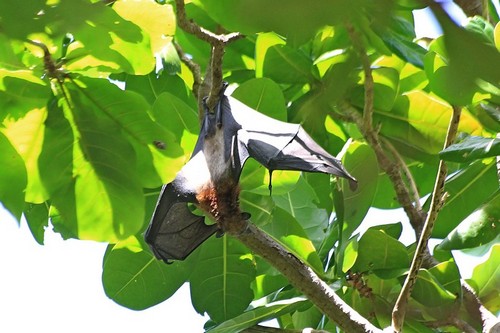 In the breeding season, males form harems. Pregnant females live in separate colonies. Pregnancy in females lasts from 180 to 210 days. After birth the babies of a few months “hang” on mothers, despite the fact that it is able to fly a month after birth. 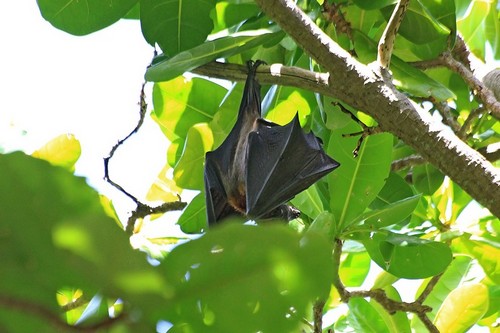 The first 2-3 weeks the female is flying with a cub until he becomes too heavy. The mother leaves him with the other hatchlings, but continues to feed on milk. The whole lactation period is 6 weeks. 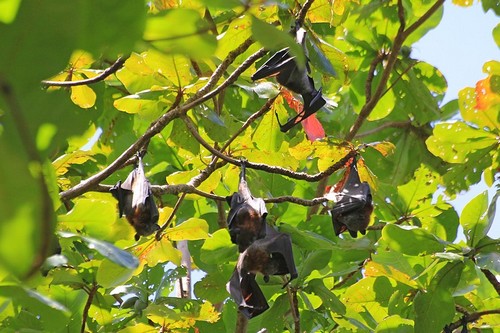 The mothers of the young generation lives for 4-5 months, and only after this period becomes independent. The sexual maturity comes at the age of 1 year. In the wild, small flying Fox lives for 9 years. In captivity, life expectancy is 20 years. 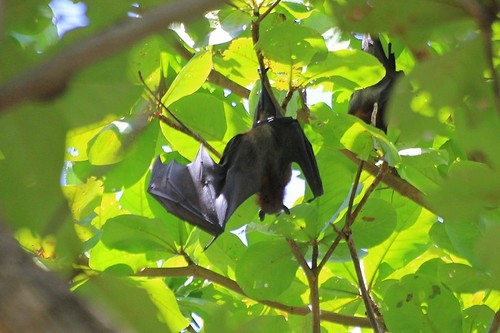 It’s a pretty friendly animals. Where a person appears quite often, they get used to it and even give themselves to be stroked. Also happy to eat the fruit. 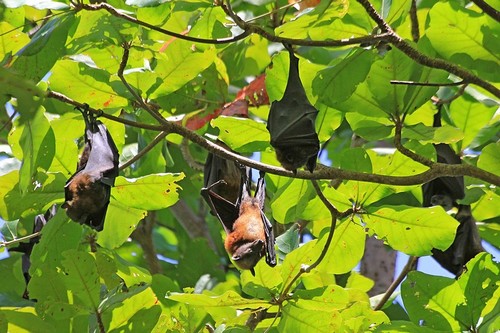 The Philippines and Malaysia small flying foxes eat. Their meat is considered a delicacy. Animals are boiled in coconut milk and eaten. In General, of a species considered a pests because they harm agricultural and horticultural land. Threats to populations are deforestation and hunting. Currently, this species is included in Red book as threatened with extinction. 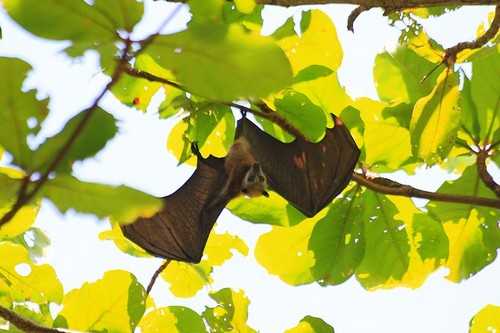