Foxes the Fennec Fox is a small Fox that lives in deserts that have large ears and attractive appearance. These foxes, like all others are predators, although their habits are softer. The name “Fennec Fox” from Arabic means “Fox.”

The habitat of foxes with large ears and their description 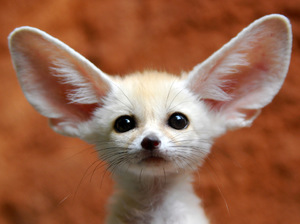 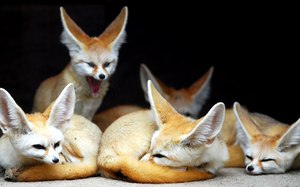 The habitat of these cute eared foxes are the desert areas of North Africa and the Arabian Peninsula. In Algeria, the Fennec Fox is the national character and even depicted on one of the national coins.

Fox Fenech does not reach large sizes. At the withers it is only from eighteen to twenty-two inches. The weight of these babies up to one and a half kilograms on average. If you compare the ears of the animal head, they are in relation to it can be huge. Can be up to fifteen centimetres in length.

Foxes living in the desert are perfectly adapted to such climatic conditions:

Last, I must say, the Fennec Fox can eat. Although eating these foxes can and roots and fruits of plants, and carrion, and eggs.

As the animal migrates the desert climate 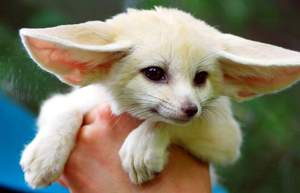 As mentioned above, Fox Fennec Fox with large ears can easily transfer the hot climate of the desert. The fact is that the skin on the ears is thin enough and foxes through her translucent blood vessels, through which excess heat from the body.

Even the internal structure of foxes allows them to live in the desert. Fenech can eat dry food and do for a long time without water. So the kidneys of this type of Lis work differently than other members of this family. Thus, it allows to keep more moisture in the animal body. Foxes fenek no sweat glands.

In the daytime Fox out infrequently, preferring to remain in burrows. If they are on the surface, I prefer to stay in the shade of shrubs or a thicket of grass. More time they are hiding from the scorching sun and out of the burrows at the approach of dusk. At the same time they prefer to hunt.

It should be noted that this is a fairly smart animal and they are very interesting to watch from the sidelines. For example, if Fenech got the egg and the hard shell is difficult to crack, he would roll the egg to the stone. And what games they meet each other! 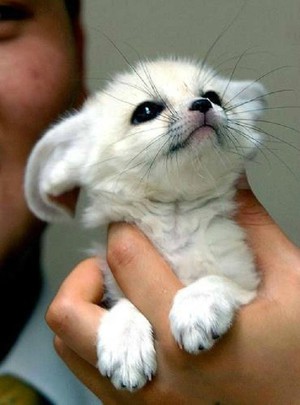 When the light weight tiny chanterelles is only fifty grams. The female does not leave the cubs alone until then, until they begin to open eyes. Males during this time does not admit to them, however, he continues to feed and gather food for the whole family.

At five weeks of age the little foxes begin to emerge from the hole and develop the territory. When they reach the age of three months, they are ready to travel for quite long distances. It should be noted that these animals are almost not afraid of anyone. They are very nimble and can easily slip away from any danger.

Recently got more and more popular domestication of wild animals. For your cute and pretty boyish good looks as exotic Pets became popular to have the Fennec Fox at home. But like all wild animals, Fennec Fox for home is not so easy to take care.

For a number of reasons: 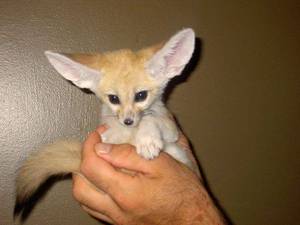 In addition, care should be taken, that the room was warm enough, and might want to do heated floors. As the animal is accustomed to very hot climate, it is prone to colds, which can cause the death of the pet. We can not allow sharp fluctuations of temperatures, and too low for them.

Even not every vet can help this exotic pet because the Fox, the Fennec Fox is unusual patient. In addition, it is better not to have a Fox if you have other Pets or small children, because they do not know how can respond to a wild animal into this neighborhood at home.

15 Comments on “Fox the Fennec Fox or desert Fox”