Honey badger belongs to the family Mustelidae. These animals live in Asia and Africa. Often they can be found in India, Iraq, the Arabian Peninsula and Turkmenistan. Coat the top of the bald badger from head to tail, whitish-grey. Face, flanks and the entire lower part of the torso of the animal black. 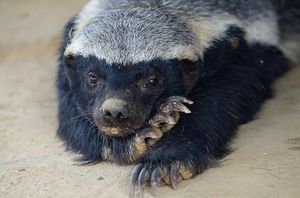 In the jungles of Africa, you can also find brand black badger. Males usually heavier than females. Their weight ranges from seven to thirteen pounds. The animal of the honey badger is pretty short legs and tail. The beast has sharp claws on his front paws. Head bald badger wide with small eyes and sharp little nose. From afar he seemed bald, so it is called the bald badger. Honey badger rise more than 70 centimeters. The tail is 25 inches. In General they resemble the Wolverine, which also belongs to the family Mustelidae.

Favorite treat honey is honey. In search of honey, the animals climb trees. But I prefer to produce their own food while moving on the ground. Watch bald badgers, as pravelo night. However, if their habitat is not crowded, then they may behave active in the daytime. Sleeping honey badgers in the pits, which reach up to three meters. In the pits they make a soft bedding of dried leaves and moss. Move the honey over very long distances during the day. Therefore, they often have to sleep in different places.

Beneath a thick skin of the honey badger has a rather large fat reserves that help keep you warm on cold days. And in Africa there are bald badgers, who prefer to build their nests, using hollow trees. They live singly. Meet a group of bald badgers in one place is rare. 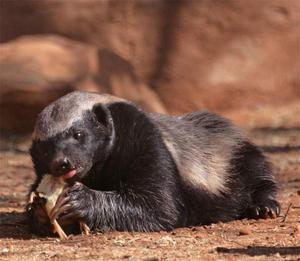 The story are courage and aggressiveness. They have almost no natural enemies. The whole skin of a badger, except for a thin layer of skin on the stomach, so thick that it is impossible to cut the teeth of predators. Bald badger is not afraid of the teeth of predatory cats and poisonous snakes, and porcupine quills. In addition to strong teeth and sharp claws, the honey badger has the ability to exude a stench like a skunk. Bald badgers are so fearless that they can attack a beast many times its size, for example, in Buffalo. Usually they do it if I sense a threat.

Bald badger is a predator. They usually feed on rodents, foxes and antelopes, birds, eggs, crocodiles, and even poisonous snakes. They also do not disdain carrion, larvae of various insects and Scorpions. From plant foods honey badger prefer berries, fruit, tubers and roots.

Pregnancy female honey badger is not more than five months. Then the light appears two to four cubs. Your first week the baby honey badger carried in holes with dry leaves, which are used for softness. More than a year, the mother teaches her cubs and does not let go of yourself. She takes care of their offspring and always selflessly protects their lives. And though the enemies of this animal is very small, the danger of a wild cat. The female fearlessly attack a lion if the danger is to her or her cubs. Still unknown lifespan of bald badgers. But in captivity, it reached 26 years.

The relationship of animals to people 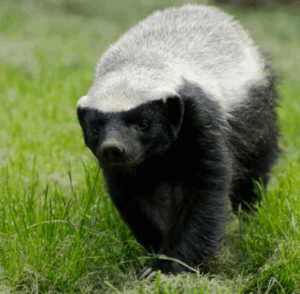 People refer to honey badgers as pests, despite their wide geographic distribution, meet people they rarely. However, there are cases when the story broke of a bee-hive in search of honey and attacking chicken coops. People in such places often use traps to stop the beast. But despite the heavy fighting with honey badgers, they still do not belong to an endangered species.

In some sources there is a description of the cooperation of the honey badger with a little bird – “the honey guide”. This bird loves to palagonite themselves the larvae of the bees, but to get them she can’t. Therefore, flitting from branch to branch she, the honey badger is paving the way to a bee’s nest and the time of discovery gives him a special whistle signal. Thus, a bald badger ruins the bee’s nest to get a favorite treat – honey “the honey guide” gets bee larvae. Very clever from clever birds.

Honey badgers are fearless animals sothat in order to get a favorite treat, with no problems even attacking the hive of African “killer bees”. But the honey badger is a very observant animal. Before sunset he goes to the hill and shut paw from the sun, following the flight of bees, finding out where they fly and where you most often return. And when he gradually gets to a bee’s nest, it starts to eat honey despite the bees.

The honey badger is a good hunter. He is endowed with excellent hearing, vision and touch. Even under the ground at a depth of five feet, the honey badger can smell prey. He quickly tearing claws the ground and strangling its prey. On the ground he catches small rodents and other animals in a few jumps. Honey, sensing the danger, even attacking those predators with which they cannot cope. However, even in this case, they will cause the enemy serious damage with sharp teeth and claws.

When the bald badger goes hunting, his tracks often weave the jackals and scavengers in the hope that they, too, get a little food. Often their expectations are met. Your site honey badger guards from their counterparts. On its territory it can dig itself a few houses. There he rests after eating. For permanent residence honey badger builds a burrow in dense thickets or in deep ravines.

Facts from the history of the honey badger named Staffl 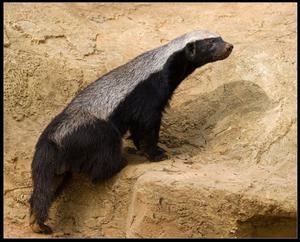 Honey badger are very intelligent animals. There is a story confirming this. It happened over 20 years ago in South Africa when out of the trap was rescued bald little badger. He was given the nickname Steffl and determined in the Kruger national Park. However, in the aviary for him to live like he is trying to escape to freedom. All anything, but Staffl haunted the rest of the inhabitants of the Park. He even managed to sneak into the house of his handler through a window.

Staff fighting, biting and all scared. Then the Park staff gave to him the female to calm down the animal. But it did not help. Now they were looking for freedom together. Then they built a concrete box inside of which were the trees. Intelligent animal climbed up to the top of a tree, which bent under his weight and the honey badger out of prison. Employees cut all the trees and put the animal back. But a smart honey badger did not give up. He built a mountain of rocks and again got! The Park staff were forced to build the honey badger electric fence.

These intelligent animals during the dry season dug a pit about dried up rivers, which subsequently gradually filled with water. Thus, they use these water holes as a watering hole.

Features of the structure of the body

The honey badger is amazingly brave, strong and smart animal. Despite the fact that lions and leopards with a strong desire can kill him, they prefer to avoid the honey badger. After all, to Tinker with it as it should have. Even in nature there have been cases as three honey drove seven lions and began to eat their prey or how three leopards chased the honey badger and was not able to cope with it.

Honey badger, he’s bald badger is listed in the Guinness Book of records as the most fearless animal that live on land.