Reindeer are called “caribou” in North America — hoofed, the only representative of its genus among the deer. Helping humanity in the development of the North Cariboo, and to this day are one of the most important biological resources in more than twenty countries of the Eurasian and North American continents.

On wild reindeer hunting for its skins and meat, and in the household he takes the role of transport (pack and riding). Habitat — tundra and taiga.

Reindeer and its appearance 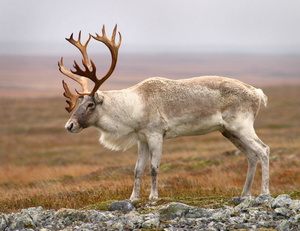 Unlike their cousins, the reindeer at the end of the muzzle (the front part of the upper lip) has hair, and priority food are lichens. Also observed behaviors that are unique to reindeer. For example — gregarious lifestyle.

Body caribou sufficiently lengthened, which gives the animal of medium size. Proportional and elongated head. Seeming, at first glance, the massive neck is actually quite thin and long, just overgrown hair. Due to the short legs, the animal looks pretty stocky, and lacking in the graces of their relatives. Body length is an average of 1.8-2.2 meters in males, and 1.6-2 m in females. The increase to 1.4 m in males and 1.2 m in females, and weight varies about the 70-200/70-120 pounds. It should be noted that wild deer are larger than domesticated. Of course, much depends on the wealth of the grassland, which is home to reindeer, and from the habitat. 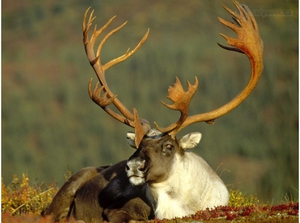 Also characteristic of the differences between reindeer and caribou from their brethren — the antlers have both males and females — large branched horns, the scope of which is up to 1.2 meters. The end of the horn has a shape in the form of vertical blades, and the Horny barrel and shoots flatter.Pretty big horns are very thin, about says it weighs about 12 pounds. Females have the same shape, but their horns are much smaller and lighter. Also they are asymmetrical and very diverse in their shape, number of blades, spikes, etc. Researchers noticed that the shape of the reindeer antlers also depends on the location.

Also caribou stands out for a powerful vegetation, the most prominent of the sort of deer. The fur is rather long — from 5-10 centimeters on the body to 30 centimeters on the neck. The smallest hair is on the legs, but the hair there is very thick and hard. There is the cover and around the hoofs and between the hooves are extremely hard and dense brush — this area of the hoof becomes larger, allowing less to fall in the snow. The hair was hollow, and, coupled with a rich air vegetation, created a decent protection from the piercing cold of the North wind.

The color of the summer fur is rather plain, dominated by brown and coffee color. Winter is quite colorful, there are more light shades. The female reindeer are not very distinctive colouring. Newborns have during the first months of life solid grey and brown. The color largely depends on geography. Molt at caribou is quite long and lasts from April to early August. 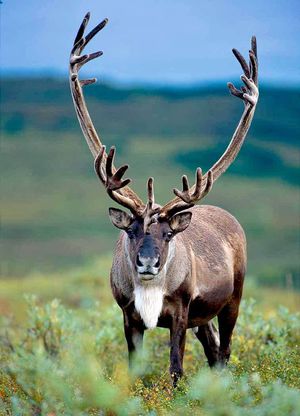 Caribou are adapted to dwell in the cold Arctic climate, as due to the structure of your hair, they tolerate very low temperatures. However, it plays a negative role — the caribou is unable to transfer heat, and they have a poorly developed potovydelenie cancer. Because of this they have to control the temperature of the body due to the frequent strong breathing and protruding out of the language.

Also, thanks to his fur, caribou are excellent swimmers — air-filled hollow hairs provide additional buoyancy. And eating lichen and fine herbs has made the teeth of the deer is weak: the front incisors are thin enough and symmetrical, and the root is weak and small.

Separately want to note about the hoof. They have reindeer developed enough and wide. This is reflected by the fact that function all four fingers, thus allowing the animal to acquire a large area of the foot, for a stronger support. Still acquire impressive hoof fur for the winter, which also contributes to the support. A hard and short hair between the toes, or “brush”, protects from sliding on the ice cover. Like moose, caribou moves, raising the limb. And due to very high angles of the bends of the joints, a caribou is easy to move around the tussocks, low shrubs, wetlands and snow.

How and what to eat reindeer

Dwelling in the Arctic climate causes the caribou to dig out their food from under the snow cover. In such circumstances, is a significant part of the year. And if the forest the soft snow, up to five feet for the reindeer issue will not be, then a thirty-degree layer of snow in the tundra can be very dense and impenetrable. Grazing the herd is quite interesting — pulling a couple of leaves or shoots, the individual goes to a new place. Thus, provided that grazed a huge herd, feed enough even for the latter species.

Despite the fact that their main food are lichens, the food of the animal is quite diverse. So, what eat caribou?

Briefly about rivals and enemies

Naturally, they are predators.