Protein member of the squirrel family, belongs to the order of rodents, mammals. The official Latin designation of genus is Sciurus. It includes 30 species found in Europe, North and South America, temperate Asia. Learn all about proteins can for example view, widespread in Russia. His representative, ordinary protein, or the home.

How does the red squirrel? 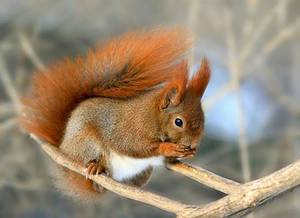 This animal is quite small in size, with slender elongated body and very fluffy tail. Body length is 20-30 cm Length of tail is about 1/3 less. The average weight – 300 grams. Head small, rounded, with long erect ears, and tassels. It is clearly visible large black eyes and rounded nose. Paws are very sharp, with sharp, curved claws, and hind legs longer than the front. Muzzle, front legs and belly of the animal is covered with a vibrissa – stiff hairs that serve as sense organ.

In the summer the fur of a squirrel is short and stiff, in the winter it changes significantly and becomes tall and dense, becomes soft. Squirrel “coat” has a different color depending on the season and habitat of the animal. In the summer it is characterized by shades of red and brown. In winter, gray, brown or black tones. Ending the squirrels, it should be noted that the abdomen of the animal, regardless of the time of year, there is always light.

The usual habitat of these rodents – mixed forests. Population ordinary squirrels inhabit the European part of Russia, Siberia, far East, Kamchatka. They can be found on the island of Sakhalin and the Japanese island of Hokkaido.

The appearance of the animal, its size, color depends on place of residence. For example, the squirrels living in the mountainous areas, larger than their relatives living on the plains. And Central regions of the area characterized by the distribution of individuals with a lighter color.

Depending on place of settlement and the external differences of this species are divided into subspecies. Altogether there are about forty.

Here are some of them:

Twice a year updates of squirrel fur. Distinguish between spring and autumn. In the spring molt often occurs in April and may. In the fall she starts in September and lasts nearly to the end of the season. If in the first period, the animals molt in the direction from head to tail, in the second case, the shedding process occurs in the opposite direction. Thus, despite the twice-a-day shift cover the tail of the animal that sheds only once a year in autumn.

Like all mammals, squirrel molting periods are associated with hormonal activity, which depends on seasonal changes. For the duration of this process and the quality of the new furs have an impact as weather conditions, and the number of harvested forage.

A way of existence 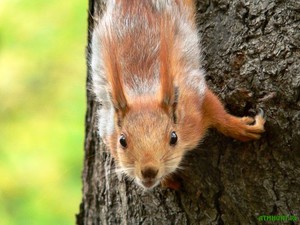 Because protein – a typical representative of the forest population, nature has endowed them with certain qualities and “skills” necessary for survival in these conditions.

The main part of its life forest squirrels spend on the trees. Animals possess great agility and is able to easily jump from one tree to another. Sometimes the multimeter jumps resemble flight. Well-developed hind limbs is able to provide a strong impetus, and a large bushy tail serves as a parachute and steering wheel at the same time.

On earth the little creatures feel less calm and move with great caution, short jumps. Sensing danger, they immediately climb up the trees.

For arrangement of the dwelling squirrels prefer to use the hollow tree. They are thoroughly insulated, lined inside with leaves, dry grass, moss or lichen. If there is no nearby suitable tree hollows, squirrel builds the nest alone, using a conventional branch. Inside it is also carefully insulated. This house has a spherical shape and fastened among the branches in the treetops.

In winter in the same nest meets several animals, the entrance is closed with moss, and, thus, warming each other, animals do not freeze.

I wonder what squirrel’s nest has two openings, which are the main and emergency exit. The second is from the side of the trunk so that the animal can easily escape in case of danger.

Typically, the protein has not one but several homes at the same time using different nests for rest, breeding and wintering. House where lives a squirrel, quickly attacked by the parasites. In this regard, animals are often forced to change their place of residence.

The composition of the diet

The main diet for squirrels is the food of plant origin.

In the early spring when the forage is lacking, animals eat insects, frogs, bird eggs and even the nestlings.

Proteins are very Thrifty. They are always prepared in advance to the arrival of cold weather and harvested, and then hide the feed in hollows or crevices of trunks, among tree roots, in a specially prepared burrows. Usually animals do not remember the location of their caches and can either find them randomly or use the reserves of their neighbors.

Under adverse conditions the proteins are forced to leave the settlements and go in search of new habitats. The reason for these migrations, could be feed shortage, drought or forest fire.

Pets are usually not compiled but are moved singly, in wide strip. These tiny creatures sometimes have to cover distances of hundreds of kilometers. Sometimes proteins have to cross the settlements, to cross rivers and bays. In the way many individuals die from cold and hunger, become victims of predators, sink.

The mating process protein usually occurs twice a year in spring and autumn. But sometimes the female can get in a year and three litters. During the mating period near it’s going to 6 males. They seek to fully show their fighting qualities and can behave quite aggressively to each other. The strongest gets to stay with the female.

After mating, the male usually disappears and does not participate in the care of offspring. But there are times and a more responsible attitude, when the father still helps take care of the kids.

Protein is very diligently preparing for motherhood. After mating she begins to build comfortable roomy nest for future babies. The pregnancy is up to 38 days. Squirrels are born blind and hairless, their weight does not exceed 10 grams. In the spring, the number of babies small – up to 4 individuals. In the autumn of plump female can bear up to 10 squirrels.

About a month and a half newborns are fed breast milk, and at the age of two months. Sexual maturity is reached at about 9 months.

Proteins have a pronounced maternal instinct. This is evident not only in relation to their own offspring. In observing these creatures, zoologists noted the interesting fact that the adult female easily takes under his wing foes orphaned cubs and cares for them no less than family.

How many lives an ordinary squirrel? 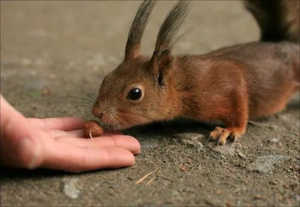 In vivo protein rarely survives the four-year milestone. High mortality is observed among young individuals. In the first winter a considerable part of them dies. The enemies of the squirrel is the pine marten, sable, Fox, and birds of prey – owls and hawks. In addition, the animals often die from starvation and disease.

In captivity squirrel live much longer. When you create conditions close to natural and providing animals with proper nutrition they can reach the age of 12 years.

Other types of protein

In addition to proteins common to the genus Sciurus are the other types prevalent throughout the world, except Australia. Widely known for the following:

Proteins are not only an ornament of our forests and parks. Making feed stocks, they spread the seeds over large distances, which promotes the growth of new trees and upgrading of the forest. Animals are of great interest to hunters as a source of valuable fur. In addition, these animals are in their own way intelligent and able to trust the person. Very closely and carefully to treat these wonderful creatures, so sweet and defenseless.