In this article we will talk about unbelievably cute animal that is insectivorous and family with a rod of iron. A hedgehog ordinary. Despite its cute exterior appearance, the animal is a predator. It can be found in almost any neglected garden, but mostly at night. So, let’s understand what a pet hedgehog? How old is this cute animal? 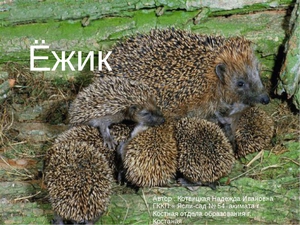 This animal is familiar to all. Even with children’s fairy tales we all know sweet, kind animal, which can often be found in your path. Called hedgehog ordinary thanks to a Latin phrase that characterizes the animal as “the barbed barrier”.

Types of Yezhov, in fact, there are more than 20, but they are all similar to each other. The body of the hedgehog does not exceed 20 centimeters. Eyes animal like small beads, by the way, the eyesight of a hedgehog is not very good. As for the sense of smell and hearing — there is a hedgehog to be envied, despite the fact that the animal has very small ears and nose.

There is a misconception that hedgehogs and porcupines — relatives. In fact it is absolutely not true. Though they have similarities, but are relatives of hedgehogs, most of the moles and shrews. Not always-like animal is related to the hedgehog. For example, the famous sea urchin has nothing to do with ordinary hedgehog, though they are called equally.

The hedgehog is a carnivore that eats insects. The average animal weighs about 800 grams, but before you hibernate he can get the stock weight up to 1200 grams. Female hedgehog is always smaller than males. The hind legs of the hedgehog are longer than the back. On each foot are sharp claws. The tail of animal is very small and almost invisible.

Needle hedgehog inside the hollow. Length they are usually no more than 3 inches. Under each of these are the muscle fibers that help the hedgehog to draw and spread needles. During the year, the hedgehog can grow new needles. Coat animal does not reset ever, it is updated throughout the year on their own. Flushing can occur only in a sick animal.

One adult hedgehog carries up to six thousand needles, young — up to three thousand. The tummy of the animal is covered with small, sparse and dark hair.

The famous feature of hedgehogs is that when in danger it curls up into a ball. This ability of the animal relates to the ability of a ring of muscle while reducing stretch the skin. Rolled in a ball the hedgehog can remain for a long time until a dangerous situation has passed.

Hedgehogs only live on two continents:

Favorite habitats of these animals spiny — herb thickets, river banks, forests and abandoned orchards. Hedgehogs do not live only in the swamps in the coniferous forest. Hedgehogs are solitary. They always live in the same area, which constantly move in search of food.

Very often you can meet a hedgehog around residential areas: in parks, gardens, fields. So what happens when comes the season of forest and field fires and a hedgehog have nothing to eat. For the sake of survival, he goes to people and trying to find food. Well-fed, happy hedgehog, go away from the human territory, as soon as I eat enough.

The nature of the beast and its way of life 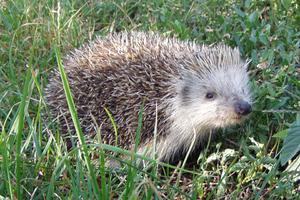 The hedgehog is nocturnal, during the day he usually sits in secluded places that are found in thickets, the leaves and the bushes. The animal does not tolerate the summer heat and trying to hide from the scorching sun in the dry grass, or burrows. The size of the home not more than a hedgehog, about 25 centimeters. In this dwelling the hedgehog takes care of herself, vylizyval language.

To clean the needles of the hedgehog may by means of arms, as they have fingers. Also fingers and absolve themselves of parasites.

In the fight against parasites of the hedgehog, helps the adoption of a kind of bath of acid. For this procedure, the animal finds rotten fruit and is awash in them. Because of this animal behavior, the stereotype that hedgehog loves apples. But culinary tastes are completely different hedgehog.

In the dark hedgehog helps to navigate in space his sharp nose. The animal is quite active and can travel a distance of three kilometers. The animal moves slowly enough, but for its size, one can say that the speed is 3 meters per second is fast. Oddly enough, the hedgehog is a great swimmer and even able to jump.

The hedgehog is quite a peaceful animal, which despite this has a lot of enemies. This: 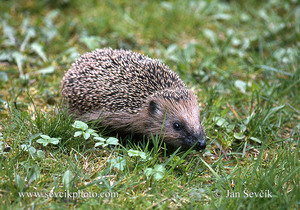 If a hedgehog meets an enemy, he attacks him to test, and then rolls up in a prickly ball. The enemy is pricked by sharp needles , and realizing that the hedgehog impregnable — out.

There are methods of deception hedgehog, which are to eat these animals. For example, the birds always attack the hedgehog suddenly and quietly. The animal simply does not have time to react. Besides, owl paws protected from the attack of the hedgehog. A Fox that preys on a hedgehog, I will try to drive it to the pond and there attacks as a floating hedgehog can not curl up in a ball.

If an attack occurs from the snake, then the battle is likely to win a hedgehog. It will grab the enemy by the tail and pulls it under himself, folding into a ball. I wonder what hedgehogs actually do not have sensitivity to the venoms of many snakes. Also hedgehogs “does not take” hydrocyanic acid, arsenic, and opium.

With the onset of autumn, the beast begins to eat and accumulate fat reserves that will help to survive the winter hibernation. By the way, hedgehogs, living in warm regions, does not hibernate.

Hedgehogs sleeping in their burrow, thus slowing down all processes in the organism of the animal, and even reduced the number of heartbeats. As soon as the temperature becomes warm, by mid-April the hedgehog wakes up. If fat reserves the hedgehog will not be enough, it is quite possible his death.

Their possessions fiercely guarded by the animals from enemies. The size of holdings, the females can reach up to 10 hectares, and male — two times more. Exploring your site, hedgehogs snort and sneeze. 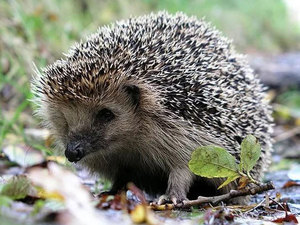 I must say that this animal is an incredible glutton. This is not a whim but a necessity. Fat is a vital condition for survival. To Supplement your diet prickly beast has berries and some fruit.

Especially needed hedgehog food, after waking up from hibernation. In order to make power, the animal can eat at one time a third of his weight. Living in captivity animals like meat, bread and even grain porridge. Misconception aboutwhat the hedgehog likes milk. He not only doesn’t love him, it is for the animal dangerous, the lactose is not just tolerated little body.

Reproduction, offspring and lifespan of the animal

Mating season occurs in early spring or summer. Females need to win in battle with other males. During the conflict, the males bite, I loudly snort at each other. Favorite female hedgehog chooses smell.

The pregnancy of eiichi lasts from 40 to 56 days. Babies are born once a year. In one litter, usually four cubs. Just born hedgehogs do not have needles or blind. But, after a few hours, begin to appear soft spines, which a day later become rougher and more.

Hedgehogs are as follows:

One month from birth urchins fed exclusively with breast milk. Living hedgehog with kids in a shelter prepared in advance, which is constructed from the leaves and dry branches. Den if anyone discovers the hedgehog changes location and moves the socket for safety purposes.

Go mother the hoglets after two months of age. Mature hedgehog is at the age of 1 year.

The ordinary life expectancy of a hedgehog is between 3 to 5 years.