Original name of this animal is the Canis aureus, which is Latin, as the Golden wolf. He was called by the Romans. Russian name – the common or Asiatic Jackal.

It is called the younger brother of the wolf. And not by accident. They look very similar, but the Jackal is somewhat smaller in size. Inhabits a fairly large area and the diet of the animal is quite wide and varied, so the risk that the species may soon disappear, is very small. Live and often hunt in pairs, then form offspring. 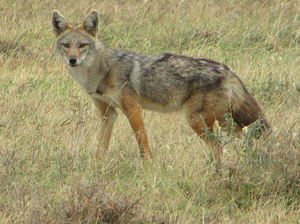 Golden Jackal is a little bit like a normal gray wolf, but in size it is considerably inferior to him.

More slender and much easier.

The common Jackal lives in the southern Asia and Northern Africa. A small piece of his dwelling place and comes to Russia. Lives mainly in deserts and semi-deserts. Prefers to live near water. Most of all he likes some kind of thorny plants growing along rivers or spring creeks. Completely bare deserts the beast eschews. Mountain climbs to a height of not more than 2500 meters. If possible, it settles close to human settlements. In some countries, the dragons sometimes roam on the streets of the villages. 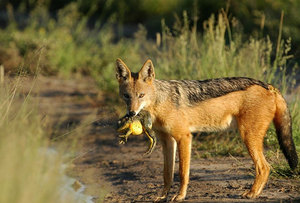 Some individuals prefer to live in a not very large flock numbering no more than ten animals. A strict hierarchy, as in a wolf pack, is missing. But this is not always true. Many adult cats like to hunt alone or in pairs.

The Jackal is nocturnal and emerges to hunt at dusk. This is especially true for those species which live near human settlements. Rest during the day somewhere in the shade or its hole. In the sparsely populated parts of the animal mode is reversed.

Golden Jackal is quite a tricky animal sometimes shows the same ingenuity as foxes. But it’s a very cowardly animal. Jackal courage is no different and therefore, in case of danger, rarely fights, and prefers to flee.

Loves to howl. Especially before going hunting. Or on the moon. As soon as one individual starts the song, other dogs that are nearby, join in the howl.

As homes uses features of the landscape. If nothing suitable could not be traced, then independently builds a den. Nora digs where little shrubs. Often settled in caves, others burrow, which was abandoned by other animals or natural hollows. If making a den in the form of beds, is building it under the thick intertwined branches of the shrub. Occasionally lives under the roots of large trees or, if possible, in the hollows.

Migration does not, however, in search of food can sometimes get away from their normal phase at a sufficiently large distance.

One of the reasons why Golden Jackal is out the risk of complete extinction is that the animal is practically omnivorous. Preys on small animals such as hares, various rodents or birds. Not against to eat also fish. In arid areas it feeds on lizards, snakes, insects. Does not shrink or carrion or sick animals or waste.

Because he eats a lot of meat, then he needs to drink a lot of water. In the spring digs for the roots of plants. In that case, if a river or a stream near which it lives dries up, then digging a hole to drink the effluent ground water.

Towards the end of the summer it feeds on plants. The roots of sugar cane, various berries, watermelon, melons are also included in the diet of the Jackal.

Those individuals who live near human settlements, often dig in garbage cans, and also attacking the peasant barns, or carry poultry.

In search of food, Golden Jackal running through its territory. From time to time lingers on the spot and sniffs. Noticing a small beast, sneaks up to him and makes a sudden jerk. When hunting in a pack, jackals scare the victim, so that she jumped from side to side and eventually hit one of the predators hands.

Jackals converge in pairs and the rest of your lives together.

In educating the young and equipping the home, the male participates actively as a female.

The relationship with the person 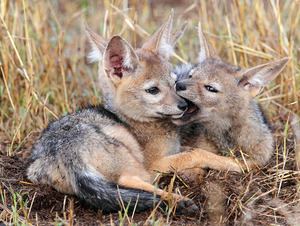 Golden Jackal used to live next to a man. Despite the fact that, in General, animal courage is no different, sometimes it may be from a man just a few meters away. Bankrupt scum. Great damage is caused to the vegetable garden and plantations of man. In search of ripe fruit taste everything, chewing and spitting out immature. Attack on livestock. Because of all the jackals in some places, join the category of pests.

People often go hunting, but Hiking to the jackals not very often successful – the beast is quite cunning and able to hide from the eyes of the hunter.

Jackals are carriers of certain diseases. In large towns is constantly digging in the mud and therefore spreads infection and parasites.

As a cowardly animal, rarely attacking man. But still such cases happen, and some of them ended with the death of a person. Because the Jackal is a carrier of various diseases, its bites can be very dangerous. This beast is in third place for the spread of rabies.

The skin of a Jackal for DIY is not good. Although the Soviet Union some time in a small amount, but used the fur of this animal.

Golden Jackal well tamed. Apparently, once upon a time that had been bred several breeds of dogs.

The image in culture

The predator took an important place in the culture of many peoples. In folklore earned a negative reputation. But still not as repulsive as the image of hyenas. Jackal include such negative traits as cowardice, fawning, feebleness, meanness.

In Indian tales the beast plays the role of a cunning but cowardly rogues. As example would be the character of the famous work of Rudyard Kipling “the jungle Book”.

In African folklore, this beast plays the role of a clever swindler and the deceiver. Since an animal usually feeds on carrion, the Buddhists associate it with a person so spoiled that you will never be able to clean themselves. Hindus Jackal is the epitome of the goddess of destruction.

However, not all people the image of the Jackal had a negative connotation. The ancient Egyptians Anubis is a God with a Jackal head and a human torso. He escorted the dead to the afterlife, ruled, how people live, and besides guarding the tomb.