Bolshereche or Irish elk, is an extinct species belonging to the genus of giant deer, a family of deer. The area of its habitat stretched from Ireland to the lands of Northern Asia and Africa, and it met in some parts of China. Irish elk lived during the Pleistocene period and the early Holocene.

Appearance it resembled the image of the modern fallow deer. It was one of the largest animals in the genus of deer. In the withers height the giant reached 2.1 metres. Horns in the scale was about 3.7 meters and weigh up to 40 kg. the Upper part of the horns had a considerable extension in the form of a shovel, pointing upwards with a number of processes. The average weight of the animal was 540-600 kg. Outstanding specimens of megaloceros giganteus had a mass of 700 kg and more. 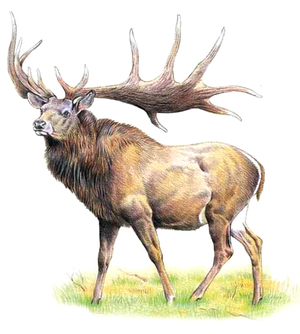 Bolshereche kind of annually dumped the horns and in a short time had again grown to their impressive size, like a modern deer. Females of these animals had horns and could easily dwell in the forest.

Bolshereche deer often present in the motifs of rock paintings of ancient people. It can be assumed that the hunting of this animal was very important for the survival of human ancestors during the ice age. From the same figures it is possible to learn and the color of the animal, it had a dark brown back and light hair on chest. The animals found during the excavation, there was a triangular structure, like hump in the shoulder girdle. Such a structure is characteristic of the modern moose. Structure is an elongated vertebrae, which provide extra support for muscles that support the heavy horns. The structure of growth individually for each species.

There was also a more minor forms of giant deer: 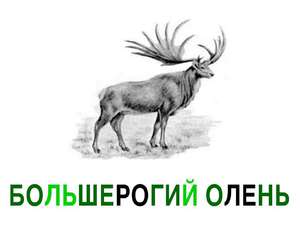 The giant beast had not mastered the territory of North America, there lived the ancestor of the red deer, similar in appearance to a mixture of elk and moose. These animals were close relatives of deer and ceased to exist, long before the appearance of a huge giant Irish deer.

Close descendants of the genetic line for the giant Irish deer the European fallow deer, not deer, as one would assume. The similarity with the elk is also based only on similar horns, but genetic confirmation has not.

In Europe, the last representatives of the giant Irish giants went extinct about 11.5 thousand years ago. The remnants of a population over 3 thousand years met in Siberia.

Volume of the horns was deprived of the beast to live in the woods, so the main habitat of the Irish giant were wet meadows. On the territory of Siberia has been excavated the remains of a 7700-year-old, who became the latest discovery related to these animals. The most part of skeletons of giant Irish deer were found in marshy areas of Ireland, which gave another name for the horned giant. Significant collection, containing the skeletons of giant Irish deer, donated to the Museum of natural history, both in Dublin.

Bolshereche giant was not the largest deer that lived on the planet. Some members of the modern moose, living in Alaska, have more weight than ancient deer. Greatly superior to him in weight and also bullheaded extinct species of moose Cervalces, latifrons, the weight of which was up to 1400 kg.

Given the duration of the period of stay giant Irish deer, it is difficult with high accuracy to determine the cause of their extinction, so this issue there are several possible scenarios:

On the territory of the Isle of manlocated in the Irish sea, were found the remains of giants that lived on earth 7700 years ago. The horns of these animals was significantly shorter than that of the specimens found in Ireland. This confirms the occurrence of allometry inside. Thus, small individuals in the population also possessed horns smaller volume, and bone formation is not subjected to continual growth.