Short-eared elephant Hoppy (Macroscelides proboscideus) is also known under another name — elephant-shrew. All thanks to a long, thin nose and movable, which makes the little thing look like miniature elephant.

As you might guess, refers the animal to the family prygunkova, solely occupying a niche kind of short-eared jumpers. Initially they were divided into two subspecies: proboscideus flavicaudatus and, the last of which is now independent. 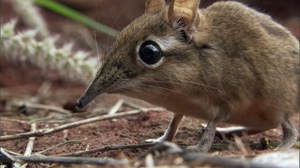 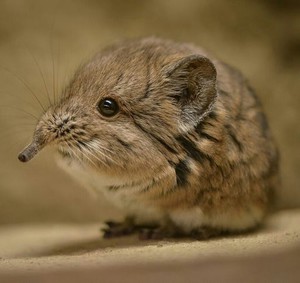 Just look at this little guy, can not help to ask thoughts about what sometimes amazing creatures created by nature. Despite the “large” prefix to its name, short-eared elephant Hoppy is the smallest member of the family prygunkova. The size of his body does not reach more than 12 to 13 inches, excluding the tail. Which, on the contrary, is characterized by massive length, often equaling the most calf: 9 to 14 inches.

He looks not much different with other prygunkova, with the exception of the main distinguishing features of the nose. It is because of their amazing elongated snout that ends with a long, proboscis-like, spout, they are called elephant jumpers. Short-eared they are for a reason, too: they have small ears and, unlike members of their family, strongly rounded.

Spots around the eyes, often meeting at different jumpers in this species do not exist. Dense and soft the coat has double coat. And if the belly is often white or gray, the upper half of the body can be several colors, depending on the specific habitats:

Habitat and population of ivory Hoppy 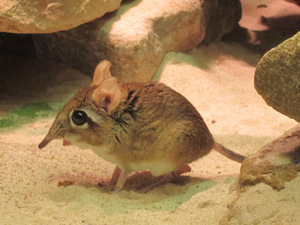 The natural habitat of skipjack — arid Africa. Mainly southern half of the continent, the territory of Namibia and part of Botswana. Their total area reaches half a million square kilometers. While most often they occur in those areas that have practically not been exposed to anthropogenic factors, preferring the desert with a few herbaceous and shrub thickets.

Interestingly, because of the strong scattering of population over a vast area in 1996, the jumpers were wrongly listed in the red list as one of the vulnerable species. But 7 years later, scientists revised their decision, replacing the status of the animal on the usual “out of danger”. And at the moment the only danger with adverse effects on the dispersal of these animals lies in the natural desertification in the occupied region.

The behavior of his jumping can be called a true single — one such animal, despite its very small size, covers an area of about one square kilometer, and the greater part of his life trying not to interfere with other canines. Only in the breeding season short-eared elephant shrews can go in search of his “second half”.

Most jumpers prefer short-eared diurnal crepuscular or night. And the hot African sun this does not preclude: on the contrary, these animals love to get out of their hideouts during a particularly hot afternoon to soak up the sunlight or pobarahtatsya in the hot sand, taking a dust bath. To change your habits and start to be active in the evening or night can make is that natural enemies, among which are birds of prey.

The basis of the diet of the skipjack make:

Most animals like ants and termites, but in lean times, they also are not against to taste and vegetable food-roots, berries or shoots of young plants.

If you talk about housing or shelter, then there is the elephant elephant shrews are extremely unpretentious and a bit lazy, because I prefer to live in vacant houses other rodents. But even if such is not found, no problem! Elephant shrew easily able to dig himself a house, especially when her feet is soft sandy soil. 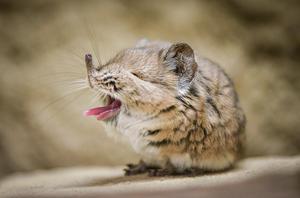 The breeding season begins in late summer or early autumn, falling on the August-September. The pregnancy period lasts 50-60 days, after which the female gives birth to two or much less of one of the babies. The special seats or sockets for the birth of their future offspring, they are not satisfied.

Small short-eared hoppers are born and developed after a couple of hours unable to move and explore the space. Completely independent but they can not be called, because they, like all mammals, the first time must eat breast milk. The first feeding takes place immediately after the appearance of the calves on the light. All of the following — mainly at night.

It is worth notingthat the female most of the time acts like she has no offspring. Male and completely forgets about their existence, while the kids themselves sitting peacefully at found them shelter, occasionally getting out to explore. Only at the end of the day the careless mom reminisces about their parental responsibilities. During the night it can feed their little ones 3-5 times. But as they grow, offspring their number is quickly reduced to one per day. And the 16-20 day grown elephant shrews leave their burrow and begin an independent life.

Short-eared elephant elephant shrews are not to popular Pets. Anyway to home in principle. They not tamed and they can be hardly find in a pet store. Most likely, wanting to get this animal you’ll have to contact one of the zoos that do breed them. And there are too little. Not to mention the fact that versed in the habits of the animal specialist will begin to dissuade from this purchase.

Despite the resemblance to rodents, contain at home is a “miracle” is quite difficult, and even harder to begin to dissolve them. These difficulties are primarily associated with the ascetic lifestyle of the animal, feeding on insects and specifics of the content.

31 Comments on “Description the short-eared elephant of Hoppy”