Red or red Panda animal charm. Despite the fact that it is a predator, he eats a lot of vegetation. Interesting looks and charming behavior made this Panda popular.

With the exception of the sexual organs, externally, males and females are extremely difficult to distinguish. The trunk of the red Panda has an elongated shape. 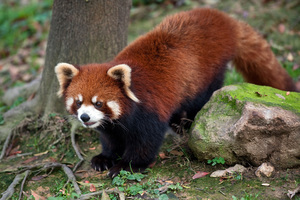 In size the red or small Panda slightly superior to a cat:

The head appears disproportionately wide for its powerful jaw muscles.

There are other characteristic features:

Paws is a small, but strong. It is possible to count six fingers. However, one of them actually is an unusual offshoot of the wrist. It is located opposite the fingers and helps to keep food down.

Claws retracted halfway and strongly bent. This allows great climbing trees. On the feet — long hair, so the red Panda feels comfortable while driving on ice or snow. When walking feet touch the ground only half.

The color of the animal is very beautiful:

An interesting feature of the muzzle — a kind of “mask”, very similar to the one that you have raccoons. No wonder the red Panda is also called raccoon. It is hard to count how many versions of “masks”. They can be compared with fingerprints in humans.

Such coloration perfectly camouflages on trees. It is most of the time.

The history of the species

Mention of the animal is known since the XIII century. The Chinese call it fire Fox or cat bear.

The Europeans learned about it only in the XVIII century. It is believed that the first met with a view of Thomas Hardwick the English General, was interested in the nature of the British colonies. He was going to give him the title of Ya because of the characteristic sounds which were made by an animal. However, the return of the General to his homeland was postponed.

During the absence of Hardwick, the name was given by the Frenchman Frederic Cuvier. It sounded translated as “blazing cat”. This approach was considered a breach of ethics, adopted in the scientific community. However, according to other rules, the name, once assigned, never changes. And the pioneer is the one who gave it. That is the honor of the discovery went to a Frenchman unfairly.

Perhaps it’s for the best. The name sounds nice, but the Open option did not take root even in the English sources. 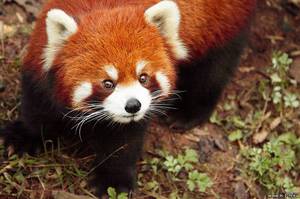 The birthplace of the animal is considered the South-Eastern part of the Himalayas. For settlement it prefers places with height from 2 to 4 thousand meters above sea level.

The area of occupancy is restricted to northeast India, North Burma, South of China. Western border of area — Nepal.

Earlier, the red Panda was inhabited much larger territory: from East Europe to North America. Scientists suggest that the situation has changed because of the climate.

Red Panda loves the woods with large trees of various species. Among them usually are:

Red pandas were particularly active in the dark. By day they sleep in nests, which are located on the branches of trees or in hollows. While relaxing cuddle, cover your head with a tail. If the weather is hot, the pandas are on a branch, dangling his legs. Some researchers argue, sometimes during sleep, the animal is in the same position as an American raccoon. That is sitting on a branch, his head resting on his chest.

After waking up or eating animal licked and rubs against the trunk of the tree. Climbs very well. In danger willingly use it, seeking shelter on top. Uses its tail for balance.

The earth moves slowly and clumsily. Despite this, the bulk of the food small Panda has to get here. Food brought to the mouth with the front paws and is absorbed in various poses:

Animal like a raccoon or a cat not only externally. No one knows exactly how many more they have in common. For example, if excitement is published puffing sound. Very similar use raccoons. The pandas back is bent to intimidate the cat.

There is a kind of behavioral characteristics, which are visible when communicating with representatives of their species:

The usual sounds made by the Panda — short screams. They are soft, reminiscent of the chirping of birds. Under stress the animal is able to snort and whistle. Some argue that during conflict, it rises on its hind legs like a bear.

The main enemies of the small Panda:

Red Panda is a peaceful and non-aggressive animal. Leads into the forest very quietly, lives separately from other members of the species. Each animal has its own territory. For females, it is usually about 2.5 km2 for males and 5 km2. For the designation of the boundaries are special tags that you are using:

Red Panda lives in nature, typically 8-10 years, in captivity up to 14. Recorded lifespan is 18 years.

Red Panda belongs to the Carnivora, but about 95% of its diet is vegetation. This is mainly young leaves and shoots of bamboo. And eaten:

It is known that even in captivity, red pandas refuse meat. Instead, they prefer to feast on something else, for example, rice porridge with sugar. However, they are predators for a reason. It is not in the diet, and in the structure designed for getting a specific food and its proper assimilation. Predators have the following features:

In this respect, the red Panda is of great interest. Her digestive system is typical of a predator, so are poorly absorbed plant-based diet. How much would an animal may eat, it is constantly experiencing a shortage of energy. Not surprising, because its usual food is digested by at most 25%.

Sometimes the question arises, how many teeth do pandas. Some sources claim that 28. According to the experts — 38 teeth. Molars are great for chewing plants. Preference is given to bamboo. Food and search of the red Panda spends about 13 hours a day. In spring and summer, one individual consumes daily:

In winter due to the shortage of bamboo it is partially replaced by other foods. Red Panda has a low metabolic rate. It helps to deal with the constant shortage of energy. In cold weather it is even more slowed down. There are other life-saving features:

Despite all these measures, animals still have difficult. In the period from autumn to spring, many of them lose about 17% of the weight. 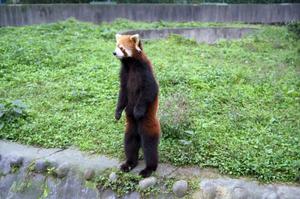 Mating season starts in January. Contacts individuals frequent. Males actively mark the trees. In females, estrus occurs once a year, and the ability to get pregnant — most days. This forces the female to take the initiative. She encourages the male to mate in this short period of time.

Pregnancy lasts 90-145 days, usually — 131. Before birth, the female builds the nest, usually in the rock or in the hollow. Use branches, leaves, etc. From mid-may to mid-July appear young.

Newborns weigh from 100 to 130 g and is completely helpless: see no, hear no, etc. How many of them depends on the individual case: 1-2, sometimes up to 4.

To the education of the father usually has nothing to do. Mother a week goes in search of food for herself and cubs. They develop slowly. Nest leaving in 3 months, definitely refuse from milk — 5. They then spend some time with her mother, sometimes up to a year, and transferred to a single independent life. Puberty is a year and 6 months.

Small Panda there is a lot of enemies in nature. The habitat is significant. Despite this, the species is extremely vulnerable. In natural conditions there, according to various estimates, from 2.5 to 20 thousand individuals. The main reasons:

Appreciated the beautiful fur of the animal, which also involves special features. Some people traditionally consumed meat in the food. In India and other countries the red pandas are kept as Pets.

The species is included in the International Red book. In zoos is now about 350 individuals. They are a good breed in captivity, but restore the normal population is still very far away.