Among all terrestrial and coastal predators, the saltwater crocodile is the largest in the world. It is on the top of the food chain within its broad range. They usually grow to 5 meters in length, but some males can reach 7 meters. A lot of modern saltwater crocodile typically ranges about 2 tons.

Name and description of the animal 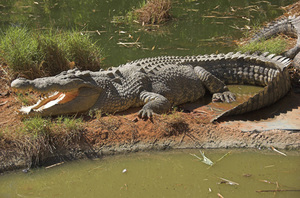 The muzzle is covered with mounds of reptile, hence its name. In Latin this animal literally translates as “porous”.

Saltwater crocodile has other names:

These names reflect the essence of the animal.

These predators prefer to live in lagoons, lower reaches of rivers and mangrove swamps. Saltwater crocodile can also live in salt water.

Estuarine crocodiles are widely spread from the East coast of India South to Northern Australia. Earlier, they met more often, but the man destroyed a large number of them. However, this kind of ahead of their kin across the width of the habitat.

Representatives of some religions for some time worshipped the estuarine crocodile. The view alone of this animal makes people horror.

No one really can not determine when this occurred. However, scientists suggest that this animal belongs to the ancient mind, which emerged about 12 million years ago. The main predators are relatives of the Siamese and marsh crocodiles. 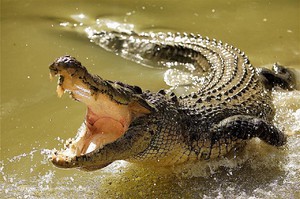 Unlike other species, white crocodile has a wide and high face. He has a very large head and heavy jaw. The eyes of these animals is equipped with a special nictitating membrane, it allows you to freely be in the water space, protecting eyes from all sorts of lesions. Color of young growth yellow-brown, with black fragments on the tail.

First, their color is very bright, but with age, saltwater crocodiles become much paler, and the spots vaguer. In adults the darker the color, some is gray or brownish coloration. Usually these nuances depend on the places in which they live. Like many animals, they are trying to adapt to the environment.

The main feature of the saltwater crocodile from other species is the ability to adapt to salt water. In search of food, they can be quite far from the shore. The practice of Dolphin crocodile has shown the ability of these animals to cross the sea 600 kilometers in just 25 days. Adjusting to the current, the predators piled on the large waves that carry them far downstream. They can stop along the way in coastal areas and wait for the large currents to save their energy.

The main enemies are tiger sharks, but marine reptile capable of dislodging them from their territory, using his incredible strength and aggressiveness. Besides, he has a very thick skin, which is too tough for the shark.

Males that have not yet taken possession of their territory, I prefer to move on the river. They choose deep reservoirs, as their paws are not designed for movement on land. Crocodiles are capable of speeds Yes 30 km/h. 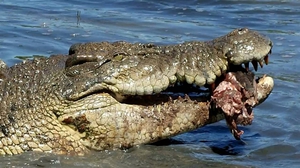 Marine reptiles are hunting after sunset. Prefer to hunt in water as on land, they can bring a weak short legs. They, too, can spend hours to wait under water until water will not do any animal. And at that moment the predator attacks dramatically, and then pulls the prey under the water, so that she could no longer resist. But caught a large fish, predatory animal pulls on the land.

After the attack he very much performs head rotation, after which the victim literally blown to pieces. The predator has a very powerful jaw with which it is able to crush the skull of a large adult animal. Satiated crocodiles often hide the leftovers, leaving them for another day. However, sometimes it manage to carry off other predatory animals.

These reptiles are not afraid of people and easily attacked. For this they called the crocodiles-cannibals. Unlike many others, these predators can attack even on a full stomach. To survive after the attack of this animal impossible. Therefore, you should avoid the habitat of this ferocious predator.

A fact of history

In 1945 on the island of Ramri saltwater crocodiles were killed around 1000 Japanese soldiers, trapped in mangrove swamps. 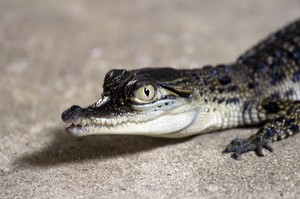 Marine reptiles reproduce when starts the rainy season. Like most reptiles, they lay eggs. The female builds the nest near the pond, which is usually 40-80 eggs. The nest is a heap of leaves and dirt. In her female buries the eggs and constantly maintaining a temperature of about 32 degrees. Every time the crocodiles equips nest in the same place as last time. Hatchlings are born approximately 90 days.

All cubs are the same sex. This is due to the temperature, which was maintained in the nest. Males appear only at a stable temperature of 31.5 degrees Celsius. In the case of a slight deviation of temperature in any direction, the light will be female.

After birth, the cubs beep. The female will help to dig cubs out of the nest and pull their teeth to the water. It will stay with them as long as they are adapted to the aquatic environment. To live the young remain with the mother up to six years. Only 5% of the offspring will be adults. The mortality rate of young animals is too great. The average saltwater crocodile reaches 65 years of age. Some scientists prescribe individuals 100 years of age.

People hunt for this kind since 1945. And their numbers considerably reduced. For example, Sri Lanka and Thailand saltwater crocodile destroyed. Kill it is usually because of greed.

Of particular value are:

Therefore, there is a practice of farming crocodiles in specialized farms. For example, in India. At the moment, the estuarine crocodile is listed in the Red book and is protected.