The sun is the main source of light and heat for planet Earth and sets in motion a very large and complex systems that develop and sustain life. One such ecosystem on land is the forest that supports a variety of plants, which, in turn, provide food for other animals.

On Earth there are several different types of forests such as coniferous, deciduous and mixed. The study of the deciduous forest shows how the food chain functions in the ecosystem,and it feels different seasonal changes. 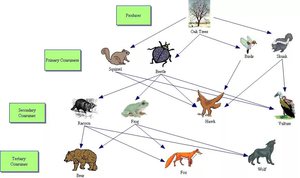 In contrast to coniferous forests, where trees don’t usually lose their leaves each year deciduous forest is characterized by a predominance of flowering trees, bushes and shrubs, most of which lose their leaves when the weather gets colder, and the period of daylight becomes shorter. Such trees and plants in winter are dormant, a device designed to save lives when sources of energy diminish.

The food chain in the deciduous forest include

In the beginning of the chain is the sunthat turns plants into manufacturers. When solar energy in the form of light and heat hitting the surface of a plant leaf, a photosensitive molecule called chlorophyll, stimulates a process called photosynthesis, a series of chemical reactions that convert the sun’s energy in sugar molecules. These molecules store energy to be used later by the plant and, ultimately, those organisms that use the plant for food. Part of this energy goes to the production of seeds which carry the genetic code for further development of the species.

Another result of photosynthesis is the production of oxygen and absorption of carbon in the form of gaseous carbon dioxide.

Food producers in the deciduous forest — the trees and plantsthat convert sunlight into mass and stored energy. These plants then become the main source of food for consumers above them in the food chain: for example, insects, birds, rodents and deer eat the leaves and other parts of plants, taking the stored energy as food. However, there is also symbiosis in which organisms of different species are within a kind of cooperative device, for example when the bees pollinate plants when they collect nectar. In addition, bacteria in the soil destroy nutrients to forms easily used by root systems. 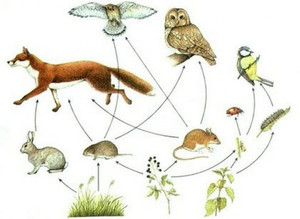 In the food chain of deciduous forest inhabitants are organisms that cannot produce their own food and must eat other organisms to survive. Consumers can be primary, secondary or tertiary type. Primary consumers include insects, rodents and large herbivores that eat mainly plants, herbs, seeds and berries.

Secondary consumers include birds of preysuch as owls and hawks, and other small predators such as foxes and skunks, which eat insects and rodents and other animals. Tertiary consumers who, as they say, are in the “top” of the food chain of nutrition of the animals are predators that prey on smaller animals below them in the food chain.

All living things have a lifespan and no way of recycling dead organisms, the ecosystem will soon be filled with the remains of plant and animal life. Decompositon destroy these remains, turning them into smaller and smaller pieces that eventually become new soil. Bacteria and insects perform this function, as well as mushrooms and some major scavengers. Received nutrient-rich soil ideal for the growing of the seeds, starting the cycle of life.

Consumers are divided into: 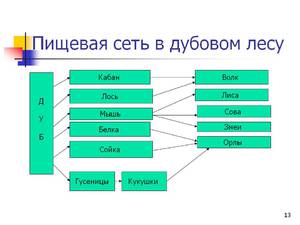 Primary consumers are mostly small animals. The forest provides food, shelter in the moss, mild temperatures and humidity that promotes growth of many kinds of insects. It is a Paradise for mosquitoes! As well as insects, there are small mammals: voles (tiny mammals like mice), chipmunks, squirrels and birds eating seeds. They feed on seeds, herbs and even mushrooms. Large animals such as deer and elk, also find food in this biome.

Interesting primary consumer is the salmon. These fish hatch from eggs in the cold mountain streams and eat tiny water organisms and insects that fall into the water. The young fish swim down the river to the ocean where they grow to maturity. When they are full grown, large fish returning from the ocean and swim upstream to lay eggs. Then the parents die and their bodies provide food for all the carnivores in the area.

Secondary consumers are also at home on the forest ground. Tiny shrews eat insects, and frogs capture insects when they fly. There are many birds inhabiting insects, some of which, like the woodpecker, are adapted to finding insects in the trees. Ducks eat the small animals, and raccoons eat animals, fishes, frogs, and fruits. Owls eat voles and chipmunks. Insects live as parasites on other animals.

Large secondary consumers, such as wolves, bears and Cougars are the only one who can defeat the deer or elk. However, once they committed the murder, and small predators can go to to share. Large carnivores sometimes eat smaller ones.

In this food web eat other animals such as foxes, beavers, black birds, and porcupines. Because the plants do so well, animals flourish too.

3 Comments on “Food supply chain in the deciduous forest”