The lizard had seen everything – it’s fairly common in Russia creature that often comes out in the summer on warm stones and driftwood to bask in the sun. And almost everyone tried as a child to catch a creeper – but it was possible far not to all. After all, lizards have one pretty amazing feature – in a situation when they feel threatened they can easily drop the tail and run when the catcher is trying to understand what happened. The tail separated from reptiles, maybe even a long time to meander and create deceptive motion. 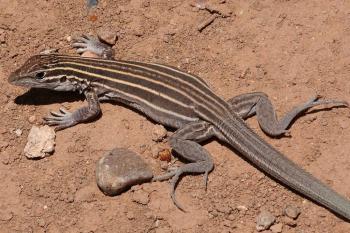 Why is this happening, and how lizards manage to drop the tail? Grows whether they have a new, and whether it is safe for the little creatures? To answer these questions will not be difficult.

Why would the lizard’s tail?

Lizard in need of a tail, and the rocker when driving, especially on the rear paws, and the storage of spare nutrients. Climbing up trees lizards use tail as extra limb, throwing their branches. The existence of reptiles without this part of the body is impossible, because she grows again, if you lose, spending this process many forces and resources of the organism. The process is called regeneration, it is typical for reptiles and amphibians. Like a lizard can grow its tail, so Triton can restore even an eyeball or a limb – though it will take him up to six months.

Interesting fact: to swing the tail can almost all types of lizards, including large tropical.

Why lizard gets rid of the tail?

Drop tail is not accidental. This body part is extremely important, but survival is more important. As a rule, a lizard loosing its tail when in danger, in situations when it is threatened. A dropped tail can be a time to make a movement, attracting the predator’s attention and giving the possibility of a small nimble creature to escape. A predator may miss their potential prey over the second sight, or to settle for a dropped tidbit and leave the lizard alone. It is for these reasons and develop this mechanism. It has justified itself in practice, many lizards were able to save themselves the price of the tail, and some of them did it more than once in my life.

Drop tail – how is it done?

Lizard without a tail

Regeneration is a wonderful process, but no less surprising is how the lizard manages to get rid of the tail altogether. After all, the blood of the animal does not lose, health problems and well-being is also not observed. Hiding from a potential predator, a creature after some time again goes and behaves absolutely normally. This process was reviewed by scientists, and found that it really flows less traumatic.

Between the vertebrae, separating the tail part of the spine of the lizard, no tight joints, the bones in this area are separated from each other. If there is a danger of the rear part of the muscles of reptiles is compressed so much that the tail simply detached. The muscles constricts the blood vessels responsible in the past for the nourishment of the tail, and the lizard runs away without risk of bleed or experience pain. For them it is a completely natural phenomenon, and in science it is called autotomy.

However, you should consider that growing a new tail requires a lot of energy. The creature will have to create new fat stores. Losing the tail just before the winter, reptile in danger of weaken and even die in the cold period, as the stay in suspended animation also require the use of accumulated over the summer nutrients.

The process of regeneration of the tail of a lizard

The tail of a lizard grows slowly, each type of this process takes its own time. Some species can not recover the tail completely, after the loss he grows shorter. Some lizards can grow a tail again only once. And because they cast him only in very serious danger, trying to break free only from a small area. First, the vertebrae to grow the tail is replaced by cartilage, and then he becomes complete.

A lizard with three tails

In nature there are miracles. In particular, some people were able to see lizards with multiple tails. This happens if when you drop the tail was attached insufficient muscular force, the vertebrae were separated, but the tail has not disappeared. In this case the old tail remains, but the body of the lizard receives a command for growing a new. Today scientists continue to investigate this feature of the behavior of lizards despite the fact that as a mechanism it has been studied almost completely. Not so long ago had discovered the presence of special stem cells from the geckos – they are responsible for the regeneration of the spinal cord. It is assumed that studying these cells will help to cope with the problems of recovery after spinal cord injury in humans.

Thus, the drop tail is a defensive reaction, which manifests itself in lizards in the attack of the enemy. The tail distracts the predator, the reptile usually manages to escape and hide. She then grows a new tail, because it allows the regenerative processes of the body.

2 Comments on “Why the lizard re-grows a tail?”