The world of the tundra is unusually harsh in its climate, but at the same time has an attractive beauty. His wealth of innumerable landscapes, and animals that are adapted to local conditions, are striking in their grace. Tundra is a natural ecosystem located in the North of the globe. The area where life thrives, is located in the Central part of the North pole. In winter the temperature is around -35°C and in summer does not rise above +12°C.

A set of tundra ecosystems (biome) is actively developing, despite the difficult climatic conditions. Fauna of this place is full of large variety. Animals spend a lot of time in hibernation or looking for warmer regions. 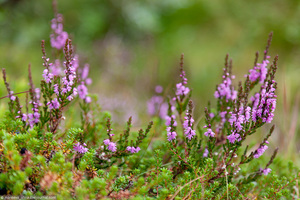 Flora of the tundra presented a very poor way:

The fauna of the Northern regions are not as diverse as in areas with warm climates, but full of the same lust for life. All the animals in the tundra are adapted to cold winters, as they have a thick coat. For each of them, the wise nature has provided a food source that allows to save your own population.

What animals live in the tundra, the world of cold and danger?

We will describe some representatives of the animal world of the tundra. 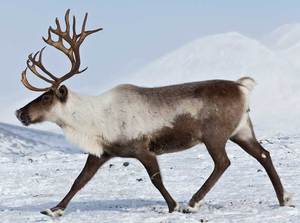 People, made friends with this giant, mastered the extreme expanses of the earth. Wild reindeer is slightly larger than its domesticated relative. These animals live in communities of several thousand individuals. Their migratory path always remains constant from generation to generation. In every season nomadic, they travel about 500 kilometers.

The structure of their hooves created in order to drive on loose snow cover. Special grooves on the limbs, resembling a scoop, help the reindeer to forage for food (moss and lichen). These beautiful animals swim well and can easily cope with large bodies of water.

In the diet of Northern deer can detect a variety of berries, herbs and mushrooms. These animals sometimes gnaw antlers countrymen, to restore the loss of salts during the migrations. Cubs the next day after birth, able to stay on his feet and suck their mother’s milk. A serious danger for the weak individuals and newborns is the tundra wolf. 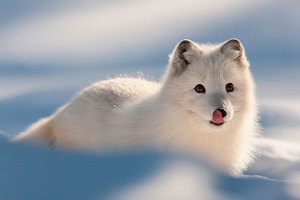 These animals of the tundra can be found on the whole space of the Arctic region. Arctic foxes love to eat small rodents and eggs of birds species. In hard times the Fox will not disdain dead flesh. They can follow polar bears hoping to eat the remains of their dinner. Berries and some herbs are also included in the diet of these schemers.

Arctic foxes build dens to shelter and shelter. For the location of the buildings fit the slopes of small hills or space on the banks of the rivers. Burrows have several exits for emergency situations. Foxes are endowed with thick fluff on the legs and body, which helps them not to lose the necessary heat in extreme weather conditions. The body of the Fox small size, and the tail, on the contrary, enormous. The Arctic Fox uses it as a supplementary heat source.

The beast has incredible endurance: it can a week to live without any food and run a day of about 20 kilometers. But when it is a tundra animal catches its prey, it will be claw. Wolves hunt in a pack, and the role of beaters, and those who commit assault, are strictly distributed. Wolves are endowed with an excellent sense of smell, hearing aid, and perfectly see for a considerable distance. A large flock of prey on young deer or their weak animals.

Wolves have unsurpassed strength and cunning. This beast tries to avoid the man. Male and female meet only once, during mating season (early-mid spring). However, they never change each other. 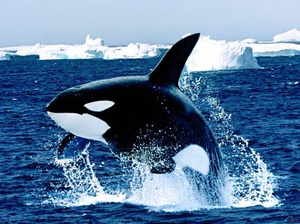 This animal tundra belong to the Dolphin family, where it is the largest representative. Marine predator perfectly adapted to living in harsh conditions of the Arctic.

Orcas are distinguished by great intelligence and ingenuity. Despite the fact that these mammals live in all oceans, they prefer cold water.

Killer whales begin to migrate in the tundra if the world detects the lack of food. Predatory orcas need plentiful in the diet, as body fat keeps heat in the body.

The length of the torso of the adult reaches eight meters weight has about seven tons. Orcas are combined into families, numbering about fifty individuals. They are able to leave food to their families and not leave the location of the pack for a long time.

These rodents are very small in size steel known for its extraordinary fertility, which they make up for the permanent destruction of its own population predators of the tundra. Lemmings are very voracious, and during the day, eat the amount of feed two times heavier than its weight. They differ unquenchable energy and does not hibernate. Twenty hours rodents eat the rest of the time allotted to short sleep.

Where these animals abound, attracts huge populations of other animals of the tundra. Yourself lemmings wander to new places, if a species is overpopulated region. Housing for them are small burrows with multiple exits.

The mammal has small ears, wide and long shape of the front flippers, which are the main tool to move in the aquatic environment. The body of sea lion covers a thick woolen blanket. The lifespan of the animal is 20 to 30 years.

For the survival of sea lions requires a considerable amount of power. They eat fish, cephalopods and bivalves representatives. These animals can hunt at great depths due to the peculiarities of physiology. On land sea lions go to rest, to bask in the sun and multiply.

Preserve the peace of the tundra

The flora and fauna of the Northern regions are extremely vulnerable, so the task of man is to ensure the safety of the representatives of the Arctic. Today, it creates more reserves, where they put animals listed in the Red book.