To tame a moose and make him a pet is not so easy. Man has long attracted the products that can be obtained from this animal is delicious meat, the most valuable milk and high-quality skin. From the hide of an elk are made of the finest grade of suede. Even moose attracted people with its remarkable strength and the possibility of its use as a vehicle. Moose not only stronger, but faster horses: horse to catch up to a moose running light trot, forced to move at a gallop. The enormous benefit of breeding moose at home, convincingly says Sergei Aleksandrovich Buturlin, a Russian ornithologist and hunters working in the first half of the 20th century. He points to the extraordinary endurance of these animals and their ability to move as the thick snow cover and snow, and swampy marshes. The structure of its hoof is not allowed to fall moose in the bog, and the most difficult parts of the way he overcomes crawling on his belly and pushes off with the hind legs. The moose is easy to eat things that come his way.

Of particular value as a hunting trophy have elk antler. It is heavy and the original interior decoration are welcome in any home.

Currently, the creation of moose farms and breeding elk in the home appears to be a promising sector in agriculture. The industry actively improve and develop. Development is carried out in three spheres: transport, meat and dairy. It is particularly interesting the transport direction. Elk are able to withstand heavy loads and carry large loads, movement under heavy packs and can actively help when moving wood. 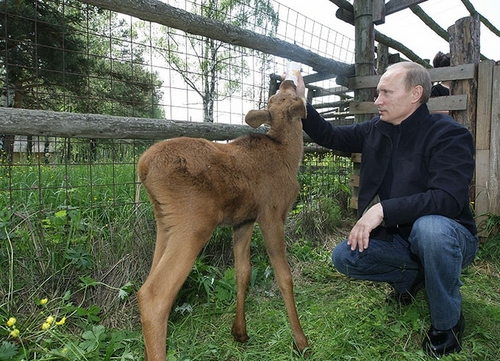 When grown moose in house conditions it is possible to obtain meat products of high quality. In this case, it is possible to control the fatness of the animal and seasonal weight losses. Elk meat venison is considered to be rougher, but it is possible to prepare delicious delicacies. Highly valued meat of a young moose.

The moose’s skin when the dressing turns out heavy, but she’s doing great suede. In the last century they made breeches for the soldiers. The wool that remains after work with the skin, it was for stuffing mattresses and upholstered furniture.

Interesting and raising of elk for the purpose of receiving milk. The milk of these animals is very oily and nutritious, and its fat content is 18% and the protein content was 8%. When boiling the milk’s gone sour, keep it in the freezer. Taste – tart and slightly salty, indispensable in the treatment of tuberculosis and abnormalities of the gastrointestinal tract.

Attempts at domestication of these forest giants began in the nineteenth century. Here are some examples.

A couple of moose caught in the 60-ies of the 19th century in one of the estates of the Smolensk region, Vyazemsky district,. These animals are soon tamed and bred up to 10 pieces. Put them in harnesses and widely used in economic works.

About 10 years later the landlord of Finland from Vyborg went to hunt for a cart or sleigh pulled by a moose.

At the beginning of the 20th century in Yuriev moose appeared on the run. The animal was trained, well trained, and caused universal admiration.

Since ancient times in the Baltic countries and Poland, the elk was used for transport purposes.

In Sweden, moose are taught to pull a light sled. This sled for the day could cover up to 25 miles, whereas reindeer coated at the same time not more than 10. But soon this method of travel was banned by the police because it was believed that the elks will be used by criminals to escape.

On the territory of Russia moose began to domesticate in Yakutia and in Central Siberia, on the territory of the Buzuluk pine forest, some hunting forestry and biological stations of the Central European part of the country.

To begin to breed moose, according to the scientist, in the late spring or early summer to buy a calf. The child, still barely standing on the legs, fed with cow’s milk. In quantity it need no more than to fatten the calf. Gradually add to milk for more oatmeal or rolled oats, milk diluted with water. Again and again the oatmeal, added more, and more diluted milk. The video shows a grown up feeding calves – young of such animals is already difficult to call. 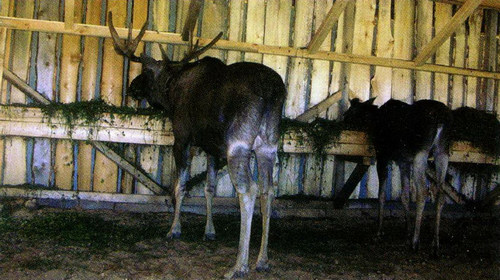 If possible, the calf is allowed to feed under the cow, so feeding will always be error-free.

When feeding elk important regularity: feed them at the same time of clean utensils. Failure to comply with these conditions the animals may have serious problems with the gastrointestinal tract, often leading to death of young animals. Calves do not tolerate heat, so they should always be fresh, cool water and an opportunity to escape from the scorching sun in the shade of shrubs or in a cool shed. When grown kids in the barn without the free grazing for their food, except hay and oats, add the leaves of the trees.

Grazing calves happy to regale leaves of the meadowsweet and Rowan eat the greens of aspen, alder, fern and bark of various trees. In the pasture the kids usually do not depart far from the nurse – cow or Mare that reared them (if any). As they grow, young elk diversify your diet sour grains, bitter herbs, Jagel and other bog mosses.

From grain elk feed barley and other cereals, baked bread and mash out the flour. Mash should not be much as such a power animals can be bloating. Elk readily eat the leaves of vegetable crops, kitchen waste fruits and vegetables.

For free range of these forest giants perfect peat swamps, areas with thickets of alder or aspen, young pine forest or spruce forest and other places – in places the moose had plenty to eat.

This fattening for the month of November, the calves become strong and tall animals, suitable for use in agriculture. Matured by this time the moose weigh from 130 to 164 kg, sometimes adult animals weight up to 245 kg.

Small calves easily and quickly get used to people. The domestication of need to start literally from the moment of birth. Born calf, if it’s not scheduled to leave with his mother are separated immediately after he receives the first portion of colostrum. Since then nurse for the animal becomes the man who feeds him. Over time the attachment to the person grows and spread to all people.

Even adult moose tag along behind the master, like dogs. About this funny episode of the video.

But the person better get used to females. Males are harder to tame, and during mating, it is better not to approach moose can be too swift and dangerous.

Moose cow at a time leads to one calf, older females can give birth and couples. Mother’s milk the calves suck until the next mating season the mother. Sometimes grown calves kneel, what to eat milk. In parallel with this power, the calf is actively eating any pasture. 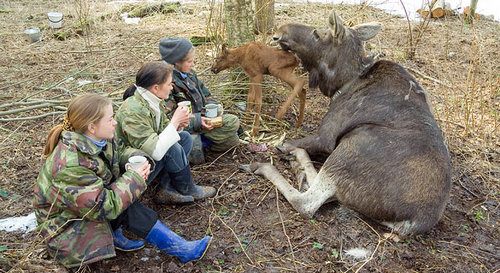 In the wild, the calf lives with the mother moose for almost a year. Before the next birth he has to leave the female, so how can it be beaten by her. If the calf will still remain, he trampled the newborn.

The calves usually appear in may, and weigh from 11 to 18 kg By November they are able to recruit up to 165 lbs. we Can say that the speed of weight gain moose far ahead of the fastest growing breeds of pigs.

For proper feeding the pigs need to buy expensive feed and supplements, while for moose from a very early age enough small branches from the forest shrubs that occur everywhere. For the moose reach the most remote pastures, where the impossible and, in fact, useless grazing other domestic animals.

In his writings Margrave has repeatedly emphasized the undoubted benefits of the content of the elks. With these animals we can get meat, excellent for its taste, the skin used to make the most valuable types of suede.

Moose milk has a high fat content and nutritional value. He considered healing and restorative drug.

In addition, elk on the farm is an invaluable draft force, and in difficult areas – only transport.