Nutria in our country are bred for its meat and fur. Doing this not only to the major fur farms, but small farms. And in recent decades there has been a trend for the breeding of nutria in the home as Pets.

But before start earning money, you need to learn how to live nutria. Breeding and maintenance in the home of these animals lesson very difficult. You need to know and be able. And still have to put a lot of effortto provide the insides of the necessary conditions for life and reproduction. 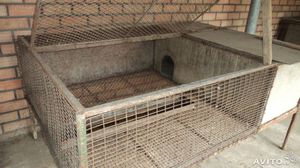 This article will talk about the breeding of nutria in the home for beginners.

What is a nutria?

Superficially, this animal looks like a rat, only very hairy. However, some people liken it to beaver.Probably, such a comparison arises because of the blunt snout and large front teeth, because the tail of the nutria rat for sure.

In length the body of this animal can reach up to 60 cm and a weight of 12 kg. And males are traditionally larger than the females.

The body of the nutria is large and looks massive. His background legs seem disproportionately small. But it’s not a mistake of nature. The body and limbs of this animal are maximally adapted for life in an aquatic environment and on land. In particular, the legs of the nutria can be detected webbed fingers.

The body of a water rat is covered with dense fur. He has a thick coarse beard and very thick undercoat. An animal fur changes gradually throughout the year. Moreover, the better characteristics it acquires in the winter.

Nutria are easily distinguished from other animals by its teeth. From the front, they are painted orange.

Initially, this nutria lived in South America. But, after travellers rated the quality of its fur, the animal was brought to Europe and North America.

Nutria intelligent animals, so it’s quite easy to escape from captivity. Because of this, in Europe there was a wild population of water rats.

In the former USSR they are best caught in Kyrgyzstan, Tajikistan and the Caucasus.

In the wild this animal prefers to choose for housing banks of reservoirs with stagnant water. Less nutria lodges near running water.

Thanks to the warm fur this animal can easily stand the Russian cold. However, initially, the nature has not given him the ability to survive in such harsh environmental conditions. This is reflected in the fact that nutria unable to choose a direction of movement under the ice. Once in the hole, the animal often dies as it can’t find a way to the surface.

Living in the wild nutria are considered to be nocturnal animals. In the dark they actively eat vegetarian food. However, if necessary, water rats eat fish, mollusks, and leeches.

The content of nutria in the home as a pet 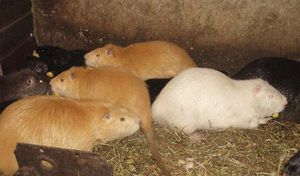 As it surprisingly sounds, but there are people that have this animal as a pet. And even more surprisingly, nutria in this role are becoming increasingly popular. Perhaps it is because these animals easily get used to the person and take him into her pack. Nutria affectionate and sociable. Even if people get tired of a water rat, she just would not bite and do not hit him.

If grown nutria at home with an infant, the behavior does not differ from a cat or dog. She will also ask to play and ask for affection. In addition, it will beg on his hands.

It should be noted that males are more sociable. They are easier to meet new people and other animals. But, the females in puberty can hiss and growl at people.

Unlike cats and dogs, which even with a good education from time to time spoil wooden furniture, a well-bred nutria don’t. However, they need to throw a couple of wooden churbachkov, on which animals will grind down the claws and teeth.

For home nutria will have to make a house. Most often it is a cage of chicken wire. In it you need to equip a place to sleep, tray and pallet.

Nutria as a pet is very easy to feed. She should buy dry food sold in any pet store. In addition, the animal’s diet need to regularly add fruits and vegetables.

It should be remembered, that the water rat in terms of apartment contents will swim fat. Therefore, you should not feed her biscuits, scones, pastries.

Also, do not forget that this animal is adapted for life in water. So, we need to give her water therapy. The water rat it is advisable to bathe regularly.

Nutria in the role of a pet has the following advantages:

In modern conditions, more and more family farms to turn their attention to the water rats. This is not surprising, because breeding nutria – a great business for peopleliving in rural areas.

These animals are easy to care for. Food for them is cheap. A large part of the feed material is growing literally under our feet: hay, cane, corn. Thus the farmer can obtain from them not only fur, but also meat diet, according to their taste similar to rabbit. Due to the fertility and rapid growth of these animals is no doubt in permanent income. And due to excellent health, they become more attractive to content than rabbits.

Just say, breeding nutria is not a new business for Russia. The first representatives of this species were imported to our country during the Soviet times. Then there were the first farm. However, until now this business has not acquired a mass character. So competition for it is small, despite the large demand for the meat and fur of a water rat. What’s more, our government offers financial support to all citizens who wish to engage in this business.

Why this business is not widespread? The fact that the breeding of nutria need to create certain conditions:

Conditions for breeding and nutria 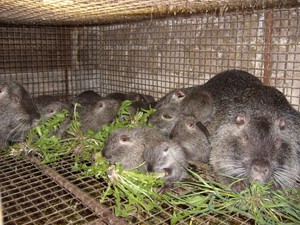 The breeding of these animals in the conditions of the home farm requires their translation into the winter in a warm room. The temperature should not be below 8 ° C. Females with young should be kept in a separate room, with air temperatures not below 16 — 20 ° C.

What content will be animals in the summer, each farmer decides for himself. Usually the owners of the farm building for the water rats small houses or cells. In the latter case, the entrance is always open so that animals can freely come out to the pond.

On small farms there is no possibility to build a pond or pool. This problem is solved simply enough. You need to put a few houses around a large trough of water and to enclose all this mesh netting.

If the available space a bit, the homes water rats can be placed in tiers one above the other. Most importantly, ensure that each house a comfortable descent to the water trough.

Another way of nutria involves the use of closed cages with individual feeders and basins with water.

As you can see, if necessary, can be equipped nutriway farm on any available square.

The main difficulties in the maintenance of these animals lie in the need for frequent cleaning of cages and replacement of water. If you do not change the water daily, the animals can get sick. Cells also need to be cleaned at least 1 time in 2 days.

Below animals grew rapidly and well bred, they need to ensure silence. The noise scares them. So building the farm to be sure, not near noisy neighbors.

As mentioned above, nutria was a very kind and peaceful animals. But, as with other animals in the pack is necessarily a renegade. Aggressive rat should be promptly identified and resettled. While working with such a rat to be very careful because its cutters are durable enough long and sharp.

The diet of nutrias

Water rats can eat any food. Most of all they love vegetarian food, but if necessary, can eat and foods of animal origin.

For the economical content of these animal farm it is recommended to put on the banks of the natural reservoir. In this case, the water rats are a big part of your diet will be produce its own.

The feed water, the rats need to give not less than 2 times a day. In the morning should account for 40% of the basic ration, and the evening 60%. This distribution is associated with the life rhythm of these animals.

Water rats ripe for breeding to five months of age. But in order for the young born viable, males and females should be kept not before they turn 8 months. By this time, the animals gaining enough weight.

Pregnancy in females lasts inside 130 days. The young are born fully developed. Puppies from the first minute well see and can move both on land and on water.

Beginning farmers should remember that immediately after the appearance of calves, together with females should be transferred to a separate room. It is necessary for their protection. The fact that the puppies in the first days after birth is not able to resist the cold.

The young grow very quickly. A few months later the puppies weigh than 1 kilogram. The mass ends at the age of 2 years. However, up to this age, nutria does not contain. The fact that the main increase in body weight occur during the first 8 months. In the future, this process is much slower and feed the animals becomes unprofitable.

By 8 months of age, the males on average weigh no less than 5-6 kg. This means, in addition to the skins, they will give 2-3 kg of diet meat. The output of meat from females is 20% less.

Disease prevention at the water rats

As you know, these animals are by nature have a very good health, and the farmer must help the animals to support it. To do this:

Remember, when breeding nutria in the home animals become ill through the fault of the farmer.