In ancient times, the lynx was endowed with magical powers, people believed that this unusual animal can see through objects and walls. In ancient Greek and Scandinavian mythology, the lynx was considered a sacred animal, which everywhere accompanies the goddess of love, beauty and fertility – Freya.

Astrologers also believe in the magical properties of this species of cat. When studying the different constellations, you can find a lot of interesting information about a small but very beautiful, which is called the Lynx.

But there is also information about what this wild cat is not only worshiped, but was hunting, killing and eating its meat as food. The taste of the meat of this animal has always been famous for is also aware of its medicinal properties. More popular in past centuries and in our days has fur. It produces expensive fur coats.

Hunting because of all the manipulation, it is in some European countries were completely destroyed, and the rest of the world population decreased so that the animal was on the verge of extinction. Scientists are trying to artificially recreate the population, inhabited by lynx, but so far it is going very slow. 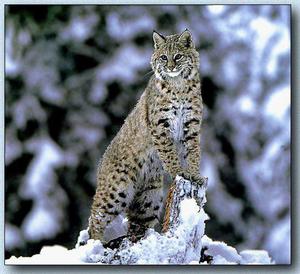 This predator belongs to the cat family and the genus lynx. This animal is not afraid of the cold harsh winters, a good move on snow drifts and falls like other animals. He dwells, as a rule, in the taiga, forest steppes, tundra, mountainous terrain and thick coniferous forests.

Over the years, the area of distribution of wild cats has become much smaller. The animal lived in most parts of Europe, it is now found in the Carpathian mountains, Central Russia, Kamchatka and Sakhalin. But also the lynx lives in Finland, Spain, Croatia. Sometimes you can find the animal in the former Soviet space. The lynx loves the open space and adapts well in the wild, hunting wild animals smaller than her in size.

Body length of adult animals is about seventy — one hundred and thirty centimeters, females are usually slightly smaller than males. Cat’s weight about twenty pounds. Common lynx has a rounded shape head, with nice ears and tassels of hair on their tips.

Those who are interested in these members of the cat, first of all I want to know things like:

Classification of lynx common occasionally updated with new subspecies. Nowadays it is known about ten subspecies.

Animals have a small number of differences from each other, they have similar lifestyle, behaviour and taste preferences.

This view of predators, like everything, eat mostly meat. The basis of the diet of the animal are rabbits, birds, small rodents. But also the lynx can hunt larger animals such as deer, elk and wild boar. If the cat lives in places where there are large bodies of water, it can get the fish and eat it. It can prey on Pets, if you live near human housing.

Normally to hunt a Bobcat out early in the morning, between three to six hours, yet only dawning. His future victim, she is usually long stalks, studying the habits and character, and only then attacked. It’s how sharply, making a few long jumps by two to three meters each. If lynx fails to catch prey at once, following her down a few hundred meters, it usually retreats and waits for another suitable time.

In order to lead a normal life, the day animal need to eat one to three pounds of meat. If it is not getting enough to eat its prey, it usually buries it in the ground or hides in the snow. Sometimes trotting after the other animals go and pick up a half-eaten leftovers.

As a rule, this cat prefers to live all the time at one location and a sedentary lifestyle. Only in very rare cases, she moved to another locality. This usually happens if there is a threat of extinction of the prey and the lynx begin to starve. 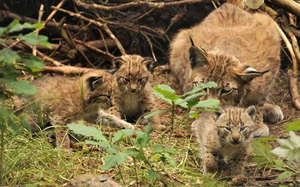 Usually the mating season in the lynx starts at the end of winter in February and continues until early April. At this time males find out who they will partner with their chosen females.

The pregnancy of the female lasts from six weeks to two months. As a rule, females are satisfied with the lair, they set it up for a few hours before the appearance of the offspring. As house animals choose hollow trees at a height of not less than ten or fifteen meters from the ground or the fissures in rocks.

In April or early may appear babies in a brood, as a rule, is from two to three, in some cases up to five. Newborn kittens are small, blind and helpless. They are born weighing less than three hundred grams, but after quickly gaining weight.

Bobcats live in the wild, usually from fifteen to twenty years. If they are in captivity, the life span can increase up to twenty five to thirty years.