The area of their huge African lives throughout Africa South of the Sahara and Asia in South and South-East Asia. It is important to remember that elephants are the largest land animals in the world.

Due to numerous reasons such as poaching or habitat destruction, the elephant population in the world was reduced dramatically. African elephants are listed as vulnerable by the International Union for conservation of nature, while the determine of the Asian red data book as being endangered.

Studying and observing these beautiful, highly intelligent,and very peaceful mammals, we made an incomplete but interesting list of the 25 smallest facts

25. Elephants produce several types of sounds. Often the sound emitted is very similar to the sound of a trumpet. The sounds the animal makes during excitement, distress or aggression. Sound usually reaches up to 6 miles. 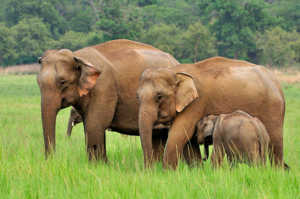 24. Females can have babies up to 50 years. As a rule, have a new baby every two to four years. They usually have one baby, twins are very rare.

23. The skin of a mammal so sensitive that it can feel like on them sits a small bird or even a fly.

22. The main reason that the animals slaughtered by poachers is their tusks. Although recent research in the UK universities have proved that ivory is 100% of the dentin — tissue that is similar to bone and has specific properties and qualities.

21. An interesting fact about the trunk. Although the trunk is really huge, weighing about 400 pounds, it is so dexterous that they can pick up very tiny things, for example, one terninko rice or a small sprig.

20. The history of the African subspecies who drink alcoholic fruits is a long-standing fiction. Animals do not eat the fruit and even if it did, it would require about 1400 pieces to get drunk could one animal.

19. Newborns can quickly get back on their feet. Cubs are born blind, weighing up to 260 pounds.

18. Since ancient times animals were used for work. They were used by people for different tasks, sometimes even abused. Because the bulls may be too dangerous and they often had to chain. The story of the elephants in wars where they were considered formidable instruments of war. The operation of these extraordinarily peaceful giants was disgusting. 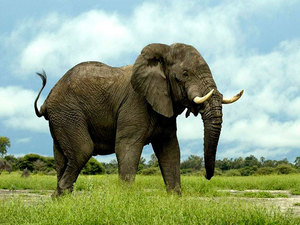 17. An interesting fact is the presence in animals of an excellent memory. This may have a factual basis. They may have cognitive maps that allow them to remember large-scale space over long period of time.

16. Scientific studies in the wild showed that the average life expectancy is 45 to 65 years. The oldest of the giants ever was Lin Wang, an Asian elephant who died in February 2003 and the giant lived to be 86 years old.

15. These amazing animals love the water, are perfectly able to swim, and also briefly dive into the water and get great pleasure in playing with the waves. Therefore, the leg joints a rest from the large weight in the intervals when the animals are afloat.

14. Just like human babies, gorillas, magpies and dolphins, feature is the recognition of yourself in the mirror.

13. These amazing animals are capable of human emotionssuch as a sense of loss, sorrow and even cry, remember and mourn their loved ones at the gathering many years after their death.

11. These giants are not afraid of mice, how to tell some myths. But ants and bees, they are afraid to horror. Consequently, African farmers to protect their fields from gentle giants, put on the borders of the possessions of ulii with bees. 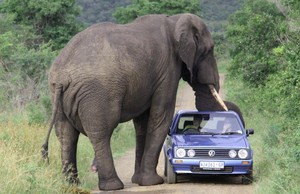 10. Animals can move forward and backwards, but cannot trot, jump or gallop. They are so heavy that, in principle, they can’t get four feet off the ground at the same time.

9. In the terrestrial world, elephants are giants, but compared to whales, they are more like gnomes. Single blue whale’s tongue can sometimes exceed the weight of an adult.

8. Another interesting fact — elephants can detect seismic signals with sensory cells in their feet.

7. The mind and intelligence. Instead of sunscreen, which will protect the skin from ultraviolet radiation, the animals had the sense to use the silt and mud. Despite the rigidity, the skin is very sensitive.

Without regular mud baths to do to protect it from sunburn, dehydration and bites from pesky tropical insects.

6. Elephants are greedy eaters. Every day, they can eat up to 16 hours and consume up to 600 pounds of food. 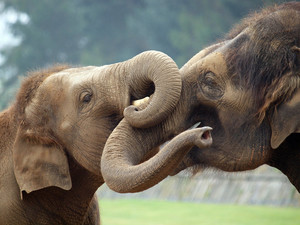 5. Touch is an important form of communication between animals. Usually greet each other, stroking or hugging trunks. Older males also use the ears and feet to discipline the young.

4. Studies have shown that most mammals, which grow baby teeth at first, and then one set of adult teeth, while the elephants — polyphyodont. The teeth grow throughout life.

3. In the body of an adult elephant is more than thirty nine thousand muscles.

1. Females undergo the longest pregnancy of all mammals — they are pregnant for 22 months.

African more Asian elephants and have two subspecies which are the African Bush elephant and the African forest.

Among other interesting facts about elephants you should know that:

One of the legends associated with elephants is that elephants are terrified of mice. It’s a lie!

One Comment on “The most interesting and unusual facts about elephants”