Common mole rat (subfamily Spalacinae), one of eight species of burrowing rodents living in the Eastern Mediterranean and black sea regions. Among the several rodents called “mole rats” (see Zokor), the common mole-rat is one of the most interesting in form, having a beveled, cylindrical body, short limbs and protruding cutting teeth. Feet and claws are surprisingly small for such a specialized body.

Mole rats seem to be eyeless and blind as a mole as a functioning remnants of these parts of the body covered with fur and is therefore not visible. Tiny eyes hidden under the skin, and the external ears are reduced to small wrinkles. Sensory bristles extending back from the tapered, soft of the nose to the eyes, giving the head a wedge-shaped kolenovic. Like the eyes and ears, a portion of the remainder of the tail is not visible from the outside.

The mole rat of medium size, from 100 to 570 grams (3.5 ounces to 1.3 pounds), with lengths ranging from 13 to 35 cm (from 5.1 to 13.8 inches). Dense soft fur may be pale to reddish-brown or gray on the upper parts; the underparts are grayish or brown. Front part of the head is usually paler than the back and may have white or yellow stripes which may extend to sides of the head or run down the middle from nose to forehead. 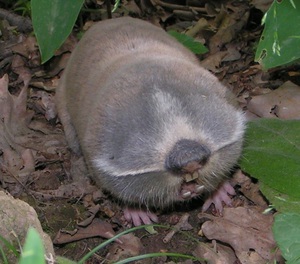 Geographically separate and a lone common mole-rat, dig a network of burrows by digging with its incisors, pushing the loosened soil beneath the abdomen with the front part, and then hitting behind the hind legs. When accumulated a sufficient amount of soil as the mole rotates to pack on the wall tunnels his hard face and uses his head to buldozerov excessive debris through the tunnel and to the surface. The resulting mounds indicate the tunnels 10-25 cm below the ground, in which a rodent looking for food.

Like the mole, the diet consists mainly of roots, tubers and bulbs, but sometimes the animal appears at night to feed on seeds and green parts of the plant. In tunnels vertical passages connecting the small holes in the deeper corridors where built separate cells for nesting, food storage and excrement.

During wet autumn and winter, females build large mounds, containing the chambers where the mating occurs and the young are brought up. Like a mole, mole pregnancy takes about a month, and litter size is from one to five.

An ordinary mole is an eccentric creature, which is neither a mole nor a rat. Mole rat is a rodent that is closely related to porcupines and Guinea pigs. This unusual animal lives in Eastern Africa. It can be found in Kenya, Ethiopia and Somalia. Mole rat lives in arid areas and deserts. Common mole rats live in southeastern Europe, Turkey, the middle East and in the Eastern part of North Africa from the shores of the Mediterranean. Some species also extend East to the Caspian sea.

Habitats suffer from people (at the moment), and their populations, previously regarded as large and stable in the wild decreases. Yet the mole is not in the list of endangered species. These rodents prefer sandy or loamy soils of the steppes, slopes, forests, meadows, pastures, orchards and cultivated fields in areas that receive not less than 10 cm annual precipitation.

Evolutionary history of mole rats in the Mediterranean presented by the fossil record, stretching from the 17 to 19 million years to the early Miocene epoch (23.8 million to 16.4 million years ago).

The tiny animal is active all year. He lives mostly under the ground or deep in the cave he is digging. In addition to the use of incisors for cracking food, roots and tubers, teeth constantly grow and they need to be sanded so that they were sharp and highly functional.

Mole rat is common in the CIS

Species of mole-rat in the CIS.

Its kind of an ordinary blind man, believed to faktichesi fills the area, which is less than 2000 square kilometers. It is assumed that in the area of his disappearance in Chechnya, the cause is civil war, which expelled the animal from the environment.He suffers, also, in other places, where its habitat encroached due to overgrazing, ploughing, irrigation and increasing soil salinity. In Dagestan it is believed that the population will drop to about 10,000 individuals.

The nesting chamber primarily one lined with dry grasses; storage located at a depth of up to 1.5 m. Feeds on roots in the diet of more than 50 species of plants; winter stock ranges from 0.5 to 12 kg (usually 1-4 kg inventory), per day consumes the feed, equivalent to body mass mole rats. Sexual maturity is reached in the third year of life. The female in the beginning of the year (January-March) brings 2-3 kids, and in may the youth is transitioning to independent living (Yangolenko and Filipchuk 1990).

Assessment of population status. The total number of Ukrainian population are estimated at 1.5 thousand Species of mole rat Density in the places of their stay is an average of 0.2-0.4 individuals per hectare, rarely 4-10 pers. / Ha (ibid.). The vulnerability factor and reducing the total number of species is the intense human activities, including ploughing up of virgin lands, the use of pesticides and fertilizers, etc.

Protection measures. Special measures of protection for the species is required. The species is listed in the European (1991) red list and in Appendix II to the Berne Convention. The species has a protection category under the “red book of Ukraine” (Filipchuk 1994). Protected in the reserve of the state value “Cecina”, in Chernivtsi region For the conservation of the species necessary to provide protection to new areas where typical for the species and habitats identified place of residence of this type.