On a personal farmstead of these animals do not meet often. Most likely, the fact that how to grow beavers don’t know everything. Beavers is not demanding of care and neperevarimye in feed animals, so breeding beavers at home is not a complicated task. Valuable fur, meat diet, expensive “beaver spring” and beaver fat, plus cheap plant food, ease of care and maintenance – that’s why the profitability is always on top. But that the animals were healthy, active and can output a healthy offspring, one desire is not enough, we need knowledge.

Let us work with you get to know these animals closer, learn what features has given them by mother nature, and you need to ensure that this large rodent felt in captivity as comfortable as free. 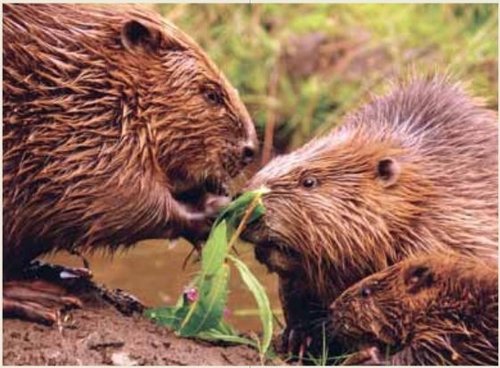 Hard to find someone who would not represent what it looks like beaver. This is quite a large animal, it weighs almost 30 kg, his body length reaches 90 cm In contrast to the torso and his tail covered with scales, it’s flat and wide. Its length is about 30 cm and width 15 cm Tail, a kind of paddle.

Front and rear paws have webbed feet. Particularly well-developed forelimbs. Them as hands, the beavers take what they need – food, building materials, etc. Building material help to harvest strong teeth of beavers, because they gnaw through even the most solid wood.

Exotic farming is making only first steps, beaver farm is still a rarity, and that’s about how beavers live in the reserve, you can learn by watching the video below. Although, I must add that in recent years the interest in Bobrovitsa has increased markedly.

It’s a fresh animal, its partners, they do not change. The kids can appear on the second or third year of life.

The greater part of his life beavers spend in the water, water is their element, they are comfortable. In water animals make the first step to appearance of progeny. Therefore, the main requirement to the contents of the beavers – the presence of a small pool, otherwise the offspring will be for you an impossible task, to bring kids beavers can’t. But in spite of this, some prefer to keep the beavers in cages or aviaries. About the feasibility of such breeding, we can argue with you.

As we have said, reproductive capacity appears on the second or third year. The female can produce offspring for up to 15 years, but in home conditions, this period is reduced to 12 – 13 years. Males cope with their responsibilities to 10-13 years. In good conditions, life expectancy 25 years of beavers.

At home it is better to breed animals, born not free. It is better to take animals from fur farms, their adaptation will be easier and faster.

The conditions of detention play a significant role for the health and preservation of vital functions of beavers. Advise them to keep in cages where they can walk out to the pool area and build their nest. In winter, beavers take it in a heated room, which will also be access to water, if the animal is not picked up at the shelter, it will die from the cold.

For the manufacture of the enclosure be required of metal mesh. Its length, width and height must be 2m*1m*0.8 m. one, the far side of the wall sheathe with plywood, there will be a nest. In the front wall make a door for walking animals. The pool needs to be a depth of about 35 cm and area of 1 sq. m.

Cleanliness of the cage – that’s the key to the health of the beaver. Beavers sleep during the day, so clean the cage you need in the evening, every day. Every three months conduct disinfection, the means for processing cage you can buy at the pharmacy, where they are presented in wide assortment. Change the water every two days, you can take the rain, settled or filtered. 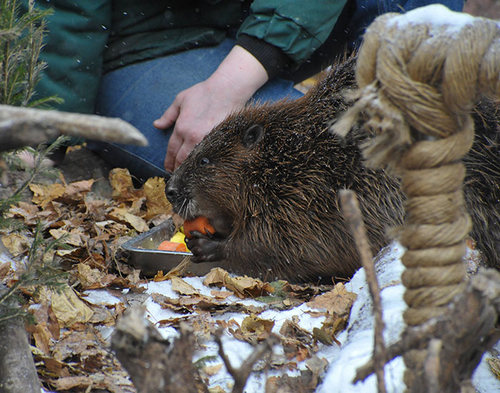 Night beaver activity much higher than during the day, so it is not surprising that they eat and at night. Feed the animals in the evening, a day they eat pounds of feed. To spend money on food does not have, as their main food is plants. They love carrots, beets and other vegetables. Their diet can consist of grass, feed for Pets, willow and aspen twigs.

The main food of young beavers after 2 months – breast milk when it is it not enough that toddlers grow and develop, they are transferred to the strengthened diet. To strengthen the immune system younger begets little beavers give a multivitamin.

Beavers breed on a

Beavers do not rarely demonstrate aggression towards other canines. Therefore, if you plan a mating, let the animals get used to each other, look. Can be done in the aviary future family net partition to a male and female saw each other. His sympathy they will show a soft rumbling, go at the net, sniffing each other. After a time, when the partition is removed, you will give them the opportunity to get to know and to think about the offspring. Even if the pairing of the young couple occurred, take the time to reassure myself. Pairing families who have lived together for less than one year, rarely gives the result. If the couple had children, keep them together until the end of days.

Pairing the couple falls in the middle of January – end of March. Beavers are unique Pets because of their mating occurs in the water. The female bears offspring 100 days. With the age of mother the number of the young increases from 2 to 4. The offspring appears viable, well-developed, sighted, covered with fur. Three weeks parents faithfully care for them, not to impose on each other duties. To two months the female feeds the babies milk, but with 1.5 months milk is not enough for them, they eat vegetation. 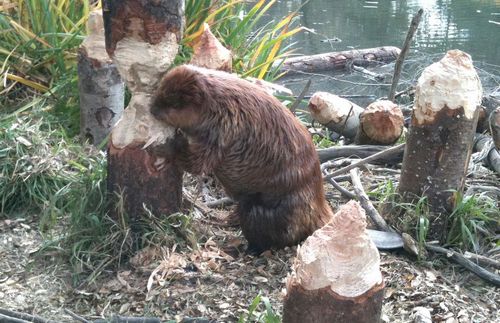 Up to six months beavers live with their parents, then they moved to rearing in a separate enclosure. Their weight at this time is 6-8 kg and they can take care of myself independently. But, it turns out, is not so simple. Given the controversial nature of the young begets little beavers and a long time to leave them alone is impossible.

In conclusion, I want to add that experts recommend to take animal producers not from the wild and on fur farms.

Wild animals used to freedom, so the limited space causes them stress, fear and discontent. His attitude they may display differently. Some animals can sit depressed in the corner of the cage and not react neither to the voice nor to feed, nor the owner. Others on the contrary may be hyperactive, to publish unpleasant sounds, hiss and snort. In any case, all this will not last long, and by the middle of the second week of adaptation to an end.

All sorts of animals, including beavers, have their own individual characteristics. Alone, until the end of days will remain indifferent to the person, others at every opportunity will show him your love and appreciation. These smart, funny and very hardworking animals can not only make contact, but the sight of the man that brought the food to stand before him on its hind legs.