Ferrets, of course, very attractive and lovely. This animal will win the heart of almost every caring animal person. A dream pet, but rarely think about whether they will be able to provide him with all necessary facilities for a comfortable stay. Meanwhile, the contents of ferrets is difficult, requiring specific knowledge, a lot of effort and time. In this article we will talk about how to care for a ferret at home, in order to help animals and their owners coexist in harmony and peace, bringing each other joy. 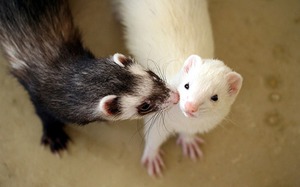 All but one species of weasel, wild. Domesticated was the only one that has a name fretka. Ferrets quickly become popular among breeders due to their beautiful and soft hair, flexible body and long luxurious tail. Embrace this wonderful, warm and soft animal — pleasure. Wild species are only colour is dark brown, but ferrets can be a variety of colors ranging from very light white and ending with black.

Ferrets as Pets: pros and cons 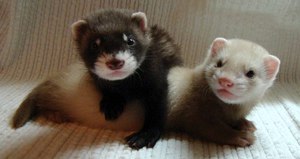 Ferrets are not particularly sociable in the first time to stay in your home, such as puppies and kittens. But certainly you can say that with these animals no one will be bored. The undoubted advantage is their playfulness and agility, which will not leave the animal even in old age.

In the content ferret can be noted the following positive aspects:

Despite all its advantages, ferrets difficult Pets. They have a number of drawbacks, which you must read for anyone who wants to make yourself such a pussy that he doesn’t end up on the street because of lack of training of their owners:

After having carefully considered all the “pros” and “cons”, but consider whether you need a pet, make a decision.

If you do decide this is undoubtedly a responsible step, begin to learn all the intricacies of content ferrets, because a lot of them, and will have to perform everything if you wish to make your pet happy.

The size of a small ferret, which allows you to keep the animal in a small house. If the ferret lives in a cage, keep in mind that these animals are by nature very active and mobile, therefore of the time they must spend outside the walls of the cells. This is required not only for their comfort and good mood, but also to avoid health problems.

Ferrets are very clean animals, and very neat. They won’t chew all your shoes and make a big mess in the apartment. 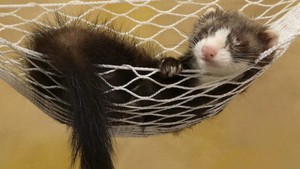 The animals do not become attached to you as much as is done, for example, dogs, but nevertheless will watching with interest for you and are happy to sit on your hands. You can quickly make friends, play with a favorite anything. They equally love playing with a ball and swing in a hammock.

Walk ferrets – a pleasure. They are very funny when you’re up in huge drifts of snow or ride on fresh green grass. Make sure that your chosen harness is quite durable because ferrets only on the surface don’t look so strong. In fact in power, they do not occupy.

How to teach to the tray

Ferrets are good because they are not necessarily to walk, but you can accustom to the tray, just like cats. The task is not easy, but quite feasible. 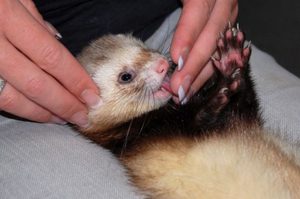 First, the tray must be filler, otherwise the animal just I’ll chew through it in seconds. Secondly, it should be noted that the metabolism of a ferret differs from other animals: he is very fast and the animal can go to the tray a few dozen times a day. You should also purchase a few trays, preferably three, because ferrets can tolerate very little. Place the trays in the corners of rooms that will be separated from the space or in the corners of the cells.

In that case, if you have multiple ferrets, they may be able to use the shared tray. However, if you have cats that will defecate in the same tray to which you want to teach a ferret, the animal will simply ignore the fact of its existence.

Worth a look, what place liked your pet, and put to a corner toilet. Then accustom your pet to the tray will be a lot easier.

Ferrets are very clever and smart, but they sometimes need help. Carefully watch the animal. He is sure to need the toilet after waking and eating. When you see that the pet is looking for a place, point it in the right direction.

Also, ferrets will not go in a dirty tray, so watch carefully for its purity. You should not wash the tray with substances with a strong smell, as the animal is not very pleasant. If the tray is empty, certainly wash it at least once a day. And in that case, if the tray filler is present, follow him and scrub as needed.

Get along with other animals 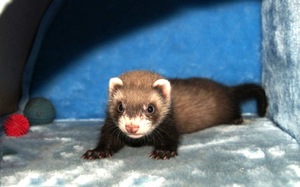 Ferrets are pretty friendly, but still not worth it to make the acquaintance of the new tenant with the rest of your Pets immediately upon arrival in his house. Animal needs to get used to the new site, feel that he is not in danger. If your home already has a ferret, don’t worry for the newcomer: they quickly hit it off.

With a cat, ferrets are also easy to make friends, but it should be their familiarity gradually, bringing together new neighbors every day more and more. The first step is to carefully allow the animals to sniff each other. But with dogs, things are more complicated. The fact is that if you have a large dog, most likely they will agree. But in that case, if the dog is hunting, to suppress her instincts will be very difficult. The hunter will always see in small animal prey. Also don’t get on this animal with small dogs, because they try to be everyone’s favorite and dominate Pets, so your puppy can be great to get from a new tenant.

The aquarium should be moved to an area inaccessible to the animal, or the cover must be closed. And it is better both at once. Because otherwise it can be affected not only fish, but also one who was after them, because fluffy may just fall into the aquarium and drown.

To rodents, like Guinea pigs and hamsters, and birds, a ferret should not be allowed, because he’s just going to eat them. In their natural habitat, these animals are a welcome snack. You should be careful and put the cage with the potential prey of the ferret away from places where he has free access.

Ferret in the home eats dry food. Animal feed other foods not recommended for his own safety. A good dry food and that with his help, the animal will be able to clean teeth by removing Tartar. When choosing food you should give preference to belonging to the premium class. From the feed medium quality keep your pet healthy and strong will not grow.

If you give any other animal products, in addition to the dry food, in any case do not mix them! This can lead to such unpleasant consequences as kidney stones. The food should be in a bowl, round the clock, and next to it should certainly be fresh water.

Ferret in the first place – not a pet, but a predator. He needs good meat in your diet, as well as fish and eggs. But don’t get too attached, because if the amount of natural products exceeds two percent, this will lead to unpleasant consequences. Love murals eggs in the wild consumed raw, but at home should give them only boiled eggs, like chicken and quail. Eat ferret maybe cottage cheese or cheese. If you feed your ferret the natural products, will certainly add to his diet vitamins.

The intricacies of care and maintenance in the house

In General, the care of these animals is not as complicated as it may seem.