The first animal that appeared on the island of Tasmania was the Tasmanian devil. This animal was fucking screaming at night, it was fierce and had a large mouth with very sharp teeth, his fur was coal-black in the local and gave him such a name. After a while it became known — Tasmanian devil. 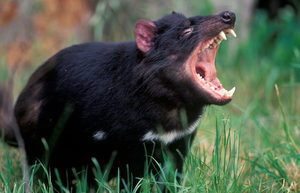 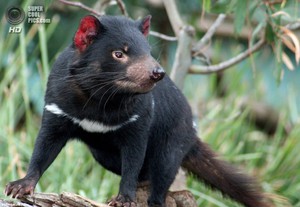 The Tasmanian devil is the leader relative to body size among the other predatory marsupials. This animal, which has a dark color and heavy body, much like a bear, but its size is not so big, it can be compared to the average dog. The size of the animal is affected by gender and age, and depends on characteristics of life and how the animal eats and where it lives.

The body length of the Tasmanian devil may range from fifty to eighty centimeters, while the length of the tail varies from twenty-three to thirty centimeters. Males more than females. Males are considered large when their height reaches thirty inches and a weight of twelve pounds.

The Tasmanian devil is a bit awkward, as it has a massive body and steel legs, the marsupial is not typical. Still very noticeable that in these animals the hind legs shorter than front, also they have no thumbs. The claws on the feet are very strong and have a round shape.

The head of the animal is large and disproportionate, a bit blunt muzzle, and ears are small and have a pink color. The females have four nipples and bag, which is formed in the leather fold, it has the shape of a horseshoe.

This Tasmanian animal has a black coat. On the tail it is very long, and the body is quite short. Many members of this genus the tail is naked, because hair is often wiped off. Looking at the tail you can determine whether the animal is healthy if it is healthy, they have short and thick because it is in the tail fat accumulates. If the animal is sick and starving, the tail becomes thin and depletes. In color also present a horseshoe-shaped white spots, in most cases they are on the chest and rump.

The skull from the Tasmanian devil very thick, teeth large and sharp, and the jaw is very strong. This animal without the least difficulty grinds big bone. The prey the predator dies instantly, as he immediately bites her spine or skull. 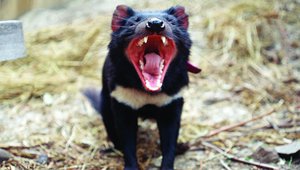 The animals that exist now are an endangered species and live only on the island of Tasmania. This Tasmanian devil existed in mainland Australia 600 years ago. There is a theory that the animals began to disappear after the natives were brought to the island dogs Dingo. Dogs are actively hunted the Tasmanian devil, this was the reason for their disappearance even before the appearance of European settlers.

But the familiarity of the animal with the European settlers influenced his safe life. These immigrants ruthlessly hunted marsupial predator that frequented their chicken coops. The aggressive mood of the people, forced the Tasmanian devil to go away to the mountains and forests. Only the fact that, in 1941 was forbidden to hunt this animal gives the opportunity to see it in our time. Now, these wonderful animals live in the national parks of the island, and can safely appear in the pastures of sheep in different regions of Tasmania.

The lifestyle of the Tasmanian devil

In relation to the landscape the animal is not picky. It can stop only those areas where no forest or home to a lot of people. Especially he likes to sclerotherapy the forests and around the coastal Savannah.

The Tasmanian devil can change the place of his stay, as to one site, he is not bound. Each animal lives in that particular area, which always has food and he is not less than twenty square kilometers. This animal can afford to appear even in areas that are marked by other animals.

They lead a solitary lifestyle. Going, only in cases where there is a big production. But even in such a situation, each individual will show that it is more important and more important than everyone else. When the animals are going to make so much noise that it is audible for some kilometers.

The Tasmanian devil is a nocturnal animal, the day he likes to spend time in a safe place.

But if he’s not in danger, that he lays down in the sun and heated. This occupation very congenial to him.

People think that this animal is very aggressive, as when meeting with another animal or person, it immediately opens its jaws, which have sharp and powerful teeth. But zoologists disagree with this, according to our experiments, they found that this was not an aggression of the beast, but just a wariness and surprise. A fact that confirms this: when the Tasmanian devil is scared or weary, it secretes a substance that is not very nice smell, this is done to protect, this method is used, and skunks. And also, it turned out that this animal can be tamed, carnivorous marsupial, can be turned into Pets.

If necessary, this beast can run at a gallop up to thirteen kilometers per hour, although at first glance they are very clumsy. All predatory animals swim very well, but with age, the activity of the animal decreases.

The enemies of the Tasmanian devil are virtually absent. The main predator that was hunting them was a marsupial wolf, but he’s long gone, as their population is not preserved. But such predators as tiger marsupials marten, and large birds of prey that pose a threat to their lives.

Tasmanian devil is a very voracious animal. He can eat food, the amount, which becomes fifteen percent of its weight. But when food and lots of it to taste it, he can eat a lot more normal.

Their diet consists of:

But the main food is carrion. Due to its sense of smell to the animal will quickly find the corpses of dead animals. They eat almost the entire carcass that is found not only love the dead fish and sheep. The biggest pleasure to bring the animal carcass that had decomposed and was eaten by worms. Mainly for night hunting, they find the corpses of rats, wallabies, wombats, kangaroos and rabbits.

When the Tasmanian devil eats its prey, it eats it all with skin and bones, rather than selecting individual parts. What they eat carrion, is a big plus, as with the carcasses of dead animals are destroyed by the flies and larvae that, in turn, are a threat to the health of the sheep.

The Tasmanian devil eats everything you find, namely: 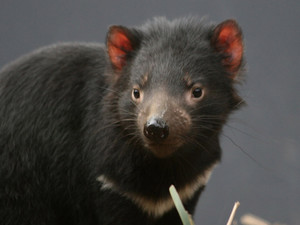 The female who has reached the age of two, goes out in search of a male. Even when mating marsupials devils are very aggressiveas they become accustomed to live alone and can’t stand to be in the team of their kind. After three days of being together, the female drives the male and it brings her great pleasure.

Pregnancy in female tazmanian devil lasts only three weeks. The offspring appears somewhere in late April or early may, as the mating season begins in late March or early April. Females are born twenty-cubs, which weigh not more than twenty-nine grams. But only four survive. Babies who did not survive, the female eats.

Tasmanian devils are born very small, but in three months they have opened their eyes and body appears wool, and they weigh at that time about two hundred grams. Later, a month they can get out of bags females and to explore the world, but they feed on milk for another two months.

The main disease is the Tasmanian devil facial disease. For the first time the disease became known in 1999. It appears that the animal’s head, there are many malignant tumors that will eventually become the whole body. These tumors damage the sight, hearing and mouth. Ill, the animal will not be able to hunt and die of starvation. This disease is transmitted to other animals of this genus, as it is caused by a virus.

To avoid infecting healthy animals are trapping the sick animals.

A cure for this terrible disease that currently does not exist.

3 Comments on “The Tasmanian or marsupial devil”