This incredible creation surprises by its individuality. It seems that in this unimaginable way to combine traits of various living beings. Lives and swims in water like a fish; moves on land like a turtle; lays eggs like a bird; feeding offspring with milk like a mammal. Scientists have long believed in the reality of such beings. Considered him a drawing of the Joker, or curiosity of nature. But with a name no problem. The presence of huge beak, the animal has received the name — the platypus. Sometimes called “docroot”, “water mole”, and in England “plasmalab”. 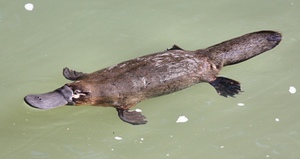 The platypus has retained its appearance since the time of dinosaurs. According to zoologists, is estimated to be 110 million years old. Originally platypus inhabited the great continent Gondwana, and after its division, managed to survive only in Australia.

In wild nature the animal is found in the Eastern part of the southern continent, on the Islands of Tasmania and Papua New Guinea. Inhabits the banks of ponds. Platypus day resting in burrows and in the evening go hunting and foraged until dawn. In the winter, often are active in daylight hours.

Their homes platypus digging at the 1,2 -3,6 m above the water level under the overhanging Bank. In appearance, the lair of the animal resembles a semi-circular cave with a long stroke. For convenience and safety, the beast makes 2 outputs: one to the surface and the other underwater. In the dungeon moles water running from the weather and enemies.

Platypus can become prey for foxes, large snakes, birds of prey, Dingo. However, to catch the animal is not easy. Water mole is not one of those who give of themselves. In case of danger, the males are protected by poisonous spurs on its hind legs. The platypus is the only mammal that produces poison. When ingested, it causes death of the animal and causes prolonged painful reaction in humans.

Externally, the platypus looks quite harmless. The size of the trunk the size of a cat,45-60 cm, Weight 2.5–2.7 kg. Body covered in smooth, thick fur. The back has a brown color and the belly is silvery white. Behind the broad, tapered tail, with a length of 10-15 cm It is somewhat like a beaver’s tail. In the tail are kept in the fat reserves, i.e. it performs the functions of storage. While swimming a platypus with the help of the tail adjusts the movement, “taxis.”

Paws the water-mole is located on the bottom of the torso, as in other animals, and on the sides, like amphibians. Therefore, the wriggling gait resembles the movement of a crocodile or monitor lizard. The limbs end in claws, between which there are membranes. The claws help the platypus to dig, and membranes necessary for swimming. Paskola clumsy on land, but in water fast and agile.

The platypus belongs to the insectivorous mammals. It feeds on small water animals, crustaceans, snails, tadpoles, larvae, and worms. On the land is guided by hearing and sight, and under water feeling. While hunting the animal comes to the surface to breathe at intervals of 1-2 min If necessary, can hold breath up to 5 minutes.

The platypus is a great appetite. In the day he eats a quantity of food equal to its weight. In the period of incubation, the females eat 2 times more than average rate.

In winter the animals for a short time (5-10 days) lie down in hibernation. 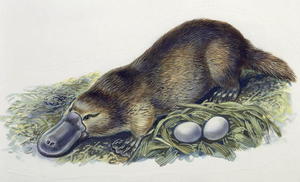 In July comes the mating season, which lasts until October. Males show increased aggression. Poisonous glands they significantly increase in size. They come in the fight for the right to possess the female. The mating ritual takes place in water. The male performs maneuvers around females, and then grabs her tail with his beak. Then a couple some time circling together. At this time the mating occurs.

A pregnant female builds a special nest in an underground chamber. She coach him water plants, willow twigs, eucalyptus leaves. Sitting in the den, block the entrance with an earthen plug. Precautions help to protect themselves and offspring from predators.

Pregnancy lasts three weeks. The offspring the female produces 1 or 2 times a year. The platypus belongs to the egg-laying mammals. In one clutch of 1-2 eggs, rarely 3-4. The eggs are small:

Covered with a dense shell-like parchment. 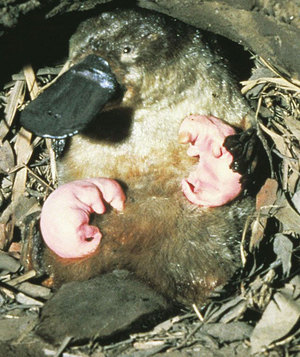 Baby platypus is very tiny, about 2.5 cm They burrow in the fur of the mother and lick milk secreted from pores on the abdominal cavity and collects in special grooves. The mammary glands in females are absent. Milk the platypus is fat, plenty of protein and no sugar.

The nursing period lasts for 4 months. At this time, the mother rarely leaves the burrow to produce their own food. She can’t permanently leave offspring, since babies are extremely sensitive to temperature. Without heat, they die quickly.

The cubs leave the den in January — March, when they grow up to 40 cm Sexual maturity at young animals comes at 2 years. The life expectancy of a water mole — 10 years.

After meeting the Europeans, with platypus in the late nineteenth century, these unusual animals began to hunt. Fashionistas loved by their beautiful, soft, warm skin. For a short period animal was on the brink of extinction.

In the middle of the XX century an attempt was made to breed platypus in captivity. A few of the animals brought to the zoo in the USA, but the offspring never received. At the end of the XX century, the Australian authorities took custody of a rare species, has imposed a ban on export of animals, has created the protected zone. Thanks to the timely action, the unique mammal was saved. Now the population of squirrels in nature is not threatened. Now they are the ones who is venerated as the living symbols of Australia.

The platypus is an incredible living paradox, fraught with many mysteries.

3 Comments on “Platypus unique animal or the paradox of nature”