Its appearance flying squirrel of the ordinary has many similarities to that short-eared squirrel. Between the two there is only one difference is that flying squirrels are common between the front and rear legs is skin (aircraft) membrane. She plays the role of so-called parachute when jumping and allows the animal to move with ease from one tree to another using air flow and selecting the trajectory.

During the flight, the flying squirrel can maneuver through the tension of the membrane, and also to change direction by 90°. Before boarding the animal adopts a vertical position, then clings to the trunk of the tree with two legs. The flying squirrel can overcome the distance of about 60-70 meters, which is actually a lot for an animal with such a small size. 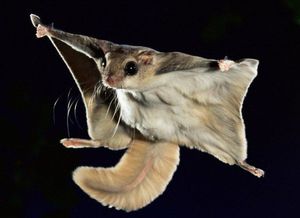 In size this miniature animal protein slightly inferior to the ordinary. Body length can reach between 12 and 23 inches, feet 3-4 inches, tail 11 to 13 inches, weight — 125-170 grams. In comparison with the body, the tail of this animal are quite large and covered with thick fluffy fur and small rounded ears without tufts is only 18 millimeters. The head is rounded with large and convex eyes black. This is due to the nocturnal lifestyle of the animal. The area around the eyes surrounded by a black bezel.

Limbs flying squirrels are common quite short, with the back longer than the front. Claws sharp and strongly curved. Flying squirrels have thick and soft fur than ordinary proteins. The top body has a gray-silvery color, often present brown hue, and the bottom is usually white. In winter the coat is especially lush and varies from light to dark shades of gray. 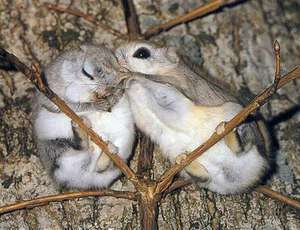 Flying squirrel as a species is widespread almost throughout the forest zone of Russia. In Siberia it is found in tall larch forests in Western Siberia for their habitat prefers pine forests and birch groves. And it can be found in Finland, China, Korea, Estonia and Latvia. In coniferous forests is rare. It lives mainly in deciduous and mixed forests with hollow trees. Most often it is the alder thickets or damp woods-birch. Inhabited by flying squirrels and in tall mountain forests, which are high in the mountains.

Due to the natural color of flying squirrels, they can easily blend in with its surroundings and remain inconspicuous in any time of the year. As housing, these animals prefer to use natural hollow trees, old nests of squirrels and magpies, crevices or to arrange their nests on the tops at a height of about 3-12 meters from the ground. This protein provides protection from predators, as well as a good review, which increases the duration of the flight.

Flying squirrel as a squirrel large part of its life in the trees and very little time is on the ground. This is the main factor that protects it from predators that want to feast on this tiny animal. Almost all the time the protein spends in search of food and are active in all seasons. Other animals that do not show interest in it, react calmly, because it is not inherently aggressive behavioral traits.

Lifestyle of flying squirrels — night and twilight. The nest in which they live, mainly are round and built of dry grass, soft moss and lichens. Flying squirrels often live in two, with the exception of only lactating females with offspring, as they are more aggressive and tend to protect their territory.

About finding these animals in the woods, you can learn mostly in piles of manure, like ant eggs a bright yellow color as the footprints they leave are extremely rare and can be confused with squirrel. The voice of the flying squirrels can be heard late in the evening, it resembles a low chirping.

The basis of the ordinary diet of flying squirrels:

In summer, this list also includes berries and mushrooms. Less frequently, these animals feed on the young bark of trees:

But the main treat — birch and alder catkins. Their ordinary flying squirrel stocks up for winter, folding in the hollow. Its diet depending on habitat. Winter activity of these animals declined sharply. During cold weather they remain in their nests or hollows, eating harvested forage reserves, but hibernate not to fall. 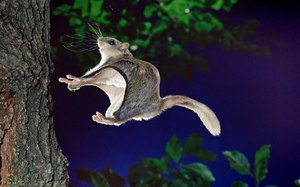 On the reproduction of the species ordinary ordinary flying squirrels are little known. Pregnancy in females lasts 4-5 weeks. Once a year is 2-4 cubs. The first brood in April and may, the second in early July. Are born blind, receive their sight after two weeks of life. Approximately 36-41 day for the first time independently leave the nest, and 45 days is able to perform your first sighting jumps. The period after 50 days of life is considered adulthood. From this moment, the brood becomes independent and moves on to an adult diet.

In captivity, flying squirrels live from 9 to 13 years, in nature — 5 years. The difference in deadlines is that they are hunted by many predators. Their main enemies are considered to be marten, large owls, at least — Sables.

Hunting these animals is prohibited, as their number is limited. Common flying squirrel is heavily guarded and is listed in the Red book. In captivity it is hard for them to settle down, since jumping requires a large space. Fur rather thick and soft, but not valuable, because easily destroyed, which complicates its operation.