The black Rhino belongs to the mammal animals nepamatoti belongs to Nasorolevu family and is a representative of one of two types of animals that live in Africa. The species to which belongs the rhinoceros, listed in the Red book and his condition is critical, and certain subspecies are extinct. If you translate the name of this animal is from the Latin, it will sound like “two-horned”. 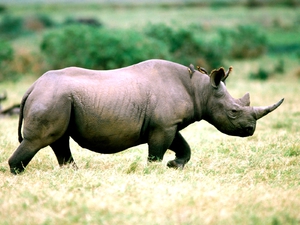 The appearance of the Western black Rhino

Black Rhino, in fact, has no black color. Its thick skin is painted in grey color but as the animal moves in the soil, gives it a completely different color.

Skin color depends on the soil in the area where the animal lives. Black color have rhinos that live in areas with solidified lava. 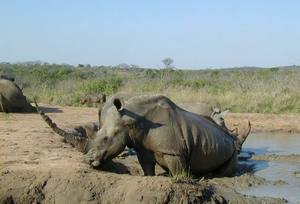 To distinguish a black Rhino from the white African is very simple, because they have differences in appearance and behavior. The black Rhino has a short and thick neck, which is much wider than its short head. The neck begins behind the withers and ends at a wide dewlap, which is separated from the head and shoulders, two large folds. The frontal part of it resembles a saddle, as it is concave inside faces.

The upper lip in these animals slightly pointed and is similar to the proboscis, the proboscis Rhino captures food. The upper lip hangs over the lower lip, which has a rounded blunt shape. Lips covered with folds which can stretch and spread out. Black rhinos have very small eyes, around which there are a lot of wrinkles. The pupils of these animals are oblong. They have a wide and short ears, which is several folds. On the edge of the ears are short and thick hair.

The horns grow directly from the skin and in no way connected with the skeleton. They are protein substance, composed of keratin, which is hair and nails, needles the porcupine and the shells of armadillos. The main front is horn, he is also the longest, its length can reach 60 cm. And the long horn was a rhinoceros, which lived in a National Park, Kenya. Horn length was 1.3 meters. 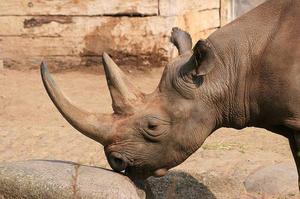 The second animal horn two times smaller first. The black Rhino horns directed forward and upwards, but not vertically, this is another contrast to his white kindred. The end of the main horn little cocked. First horn has a diamond shape, in which rounded corners. Sometimes animals of this species, not two, but 3-5 horns. If a young pet will damage the horn, it can recover, but in adult animals the horns are not restored.

Black Rhino is more animal. Its body length can reach three metersand a height of 1.5 meters. Basically their weight is two tons. But there are rhinos, which weight even more. These animals have a short tail which hangs down. Limbs they have slim and neat, they have properly developed soles and hoofs that have three fingers. And they have two folds between front and hind legs. The rest of the animal’s skin smooth and smooth.

Mainly black an odd-toed ungulate living in areas with a dry landscape, and they do not leave these areas even during very severe droughts. These mammals are strongly linked to the territory where situated, and, as a rule, do not leave her entire life. But there are rhinos that wander, searching for water and food. Black rhinos are solitary animals, females and males live separately. The babies live a long time with a female, especially the offspring of a female kind. When black Rhino are out for a walk, the female follows her offspring, and white – Vice versa. Sometimes you can find small clans that include no more than twelve individuals. Females that have cubs, are joined in the group. 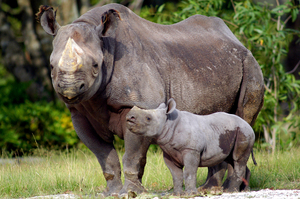 These animals feed on plants – all sorts of young sprouts, legumes, fruits, branches and thorns. Eating such food, they do not notice its stiffness, spikes and a very acrid juice. Their most favorite “dish” is the acacia. Food animals get through the upper lip, which in its structure is movable.

Every day these animals come to drink. To reach him they can go about twelve miles. In times of drought rhinos are holes that remain after the elephants. The animals are fed twice a day and sleeping nine hours a night. And on the day when it is very hot, they bathe in the mud or resting under trees in the shade. When the rhinos are resting, cattle egrets, buivolov birds and turtles are removed from their skin parasites and mites. 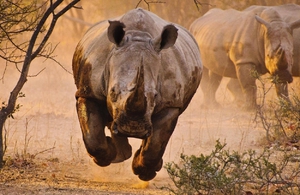 These equids have very poor eyesight, they can see a tree or a person, which are fifty meters away from them, for this reason, when meeting with the Rhino you need to stand still and not to make any movements. But they have good hearing and a very well developed sense of smell, thanks to this, animals are well oriented in the area. Despite its great weight, they can run very fast, reaching speeds of 48 kilometers per hour. They do not know how to overcome obstacles and swim. These wonderful animals are very sociable. Often you can hear them snort, but when they are hurt or scared they make a loud sounds similar to a whistle.

In spite of sociability, animals are very aggressive and can attack any object that moves. These horned beasts are not afraid of other inhabitants of the Savannah and even let them close to him, but animals that get in the way of a rhinoceros, may suffer, as raging Rhino is quite dangerous. Between males can sometimes be competition for mates or for territory. Fight but most females and males. And, for example, with antelopes, zebras and buffalos, they live in the world. When the animals go to the waterhole and Rhino doesn’t want to give way to the elephant, is fastened to fight, and often it wins the elephant. The main rival of the black Rhino is an elephant.

Worst enemies equids are lions, Nile crocodiles, and hyenas. But attacks on adults are rare. This usually happens when a Rhino wallows in mud, then he becomes an easy prey. Mainly the enemies attack the cubs. People are also enemies of these animals as often prey on themto get the trophies. The average life expectancy of rhinos is around forty years. 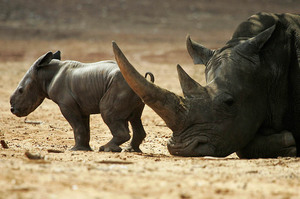 Reproduction of rhinos not depend on the season. Females begin to mate and give birth to offspring when they reach seven years of age, but the sexual maturity at them comes in four years. Males are ready to breed at a young age, but it happens to them in 10-12 years. Rhinos do not live in pairs and come together only for breeding. Pregnancy of females lasts fifteen months. Basically, the light appears only one pup, which quickly gets on his feet. The female feeds their young with milk. It could take up to two years. To produce offspring, the female may not more often than once in four years.

There are four subspecies:

At the moment, 98% of these animals live in South Africa, Zambia, Zimbabwe, Tanzania, Kenya and Namibia. Most of the animals live in national parks where they never change the areola of their habitat.