Rabbits are one of the most common animals in the world. Even despite the fact that they have a very valuable fur, being for this reason, a favorite target for hunting rabbit fertility doesn’t allow to fade this population.

In total there are 30 kinds of birds, each of them has its own habits and external features. Let’s talk today about one of them — the hare the hare. 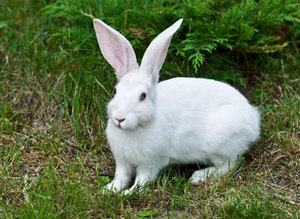 So why is Whitey? In winter this species of hare changes its color with gray (sometimes grayish-reddish) snow-white. Only on the tops of the ears may be present black spots.

The weight of rabbit ranges from 1.6 kg to 4.5 kg, length varies from 40 to 65 cm Animal has a neat tail rounded, the length of which reaches almost 7 cm, and elegant ears with a length of 8 to 10 cm Tarsi in this species is always wide, feet and fingers, which is covered with a thick coat.

Moulting rabbits of this species occurs in spring and autumn 2 times a year. In those regions where the snow falls in small quantities — the whites, the color does not change. 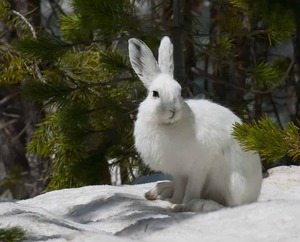 So where is this snow-white beauty? This species is most widely distributed in the Northern latitudes — North America, Scandinavia, Norway, Sweden. In Russia, a hare can be found in Siberia, Kamchatka and Sakhalin, Ukraine — Chernihiv, Zhytomyr and Sumy regions.

The whites prefer to live in places where food for them in abundance, regardless of the time of year. Most often, these beauties can be seen on the edges of deciduous and mixed forests, in bushes, in the reeds near water, in the high steppe grass. Hare tries to settle there, where his lack of predators.

What to eat rabbits?

The whites belong to the category of herbivores:

There were also unusual cases — the whites-foodies to be found, dug up and ate the mushrooms-truffles.

What is the demeanor hare? The highest peak of activity from them in the evening and pre-dawn time.

Winter hares are the whites going to dig yourself a small hole in the snow, where it hides in bad weather or in the daytime. Summer havens like the whites don’t usually make, and are arranged in a secluded place just hurting the grass.

From his place of refuge to the place of feeding the whites generally move on the same route. This is especially noticeable is in the winter — they are so well stomp out some trails that it can freely move even.

In search of food, this long-eared is able to move over very long distances — up to 10 kilometers in one night. But if eating long-eared enough, for that night he could walk only one kilometer.

The hare had a very poorly developed eyesight and sense of smell, but he has excellent hearing. The ability to move very quickly — the only means of protection in case of danger. 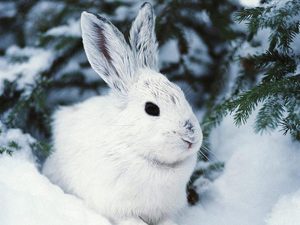 Whitey, like all his long-eared brethren, is a very prolific animal. The mating season usually occurs in the spring and summer months. In females, peak fertility occurs between the ages of 2 to 7 years. The gestation period lasts from 47 to 55 days, soon after birth zaychiha again mate. In one season a female can bring from 2 to 4 broods, depending on her age and diet. Lambing occurs in a secluded place on the earth’s surface. First leverets are born in April-may, second in June-July, others in August-September. Rarely first the kids come in March and the last in November, but such broods usually die.

In one litter the average 5-7 leverets are born, but sometimes reaches up to 11. Babies are born covered in thick fur, able to see, unlike many other animals, and capable of independent movement. Weight at birth is only 100-130 grams.

The first 8 days baby rabbits feed exclusively on mother’s milk, then begin to taste the grass. Because rabbit milk is very rich and nutritious, the kids eat once a day. After 15 days the cubs are now moving away from mother and lead an independent life puberty the whites reach the age of ten months.

The lifespan of this rabbit is 17 years old, but unfortunately, most of them do not live even up to 5 years — blame predators, poaching and infection.

The number of whites, as, indeed, his fellows varies from year to year.

Protection of this species